Looking back at these week 18 pictures and the snow... It kind of makes me feel sick.

Gosh our spring is behind this year. The tree in our back yard is barely starting to leaf out... It's the last tree to get leaves, and the first tree to lose them...

So far, this week has been incredible, weather-wise. 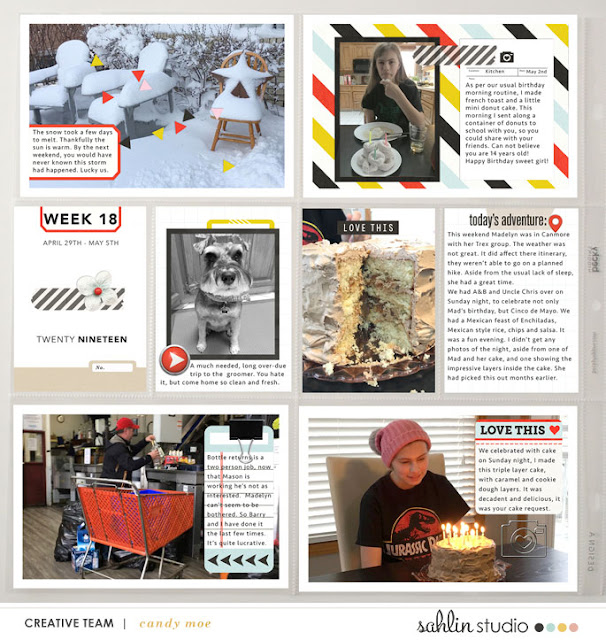 Experimenting a little bit, I decided to not put borders around the smaller 2x3 sized photos. 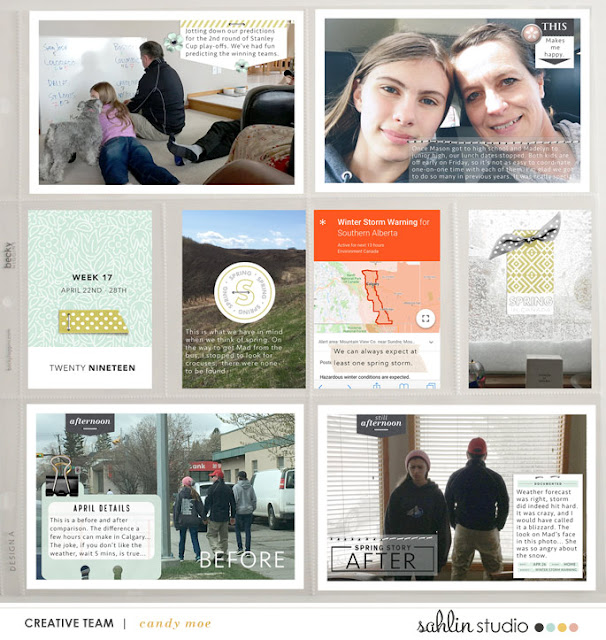 Well, obviously my intention of keeping track of words and photos for a week in the life on my blog, was a bit of a fail. All is not completely lost however, I took a lot of photos. I also jotted down information each day. The plan is to put all that information together. Now I just have to put the time aside to do just that.

Here is Week 16 of my project life album: 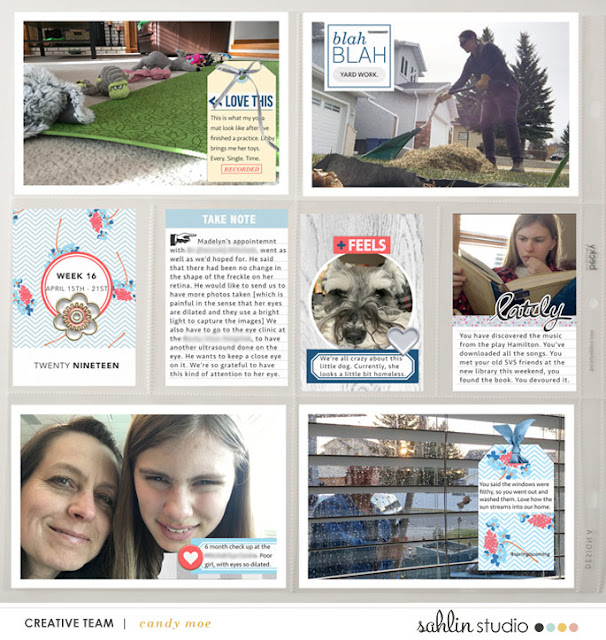 Monday Photos - A Week in the Life

Last year I worked on a week in the life album, and got it about 30% finished. And I didn't jot down any notes... What was I thinking? I can go back and look at the few photos I've captured, but not totally sure about the stories that go with them.

I have been on the fence about whether or not I'm doing it this year, and I know I'll be disappointed if I don't. I'm going to attempt to do a photo dump each morning, and jot a few things down. That way I have something to go back to. And even if I don't end up doing an album, I'll have these photos and words to go back to.

Well, in typical fashion, i forgot that today was the start of week in the life. I didn't get any first thing in the morning photos. My kids are getting kind of grouchy about having their photos taken, so might try a different tactic. 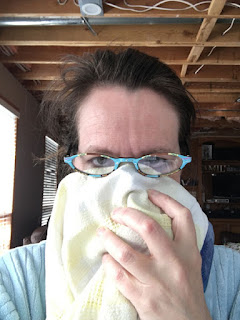 The bridge of my nose is swollen, red  and extremely painful [weird] so I iced it a little bit. 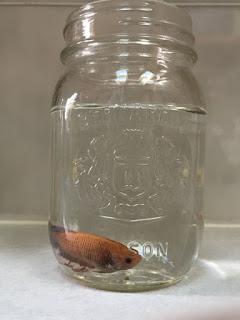 I finally broke down and cleaned the fishbowl, because I felt so sorry for poor Gil. 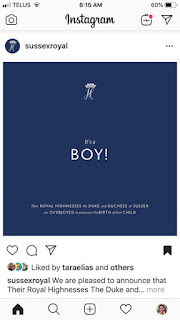 We've been eagerly awaiting the arrival of the new Prince! 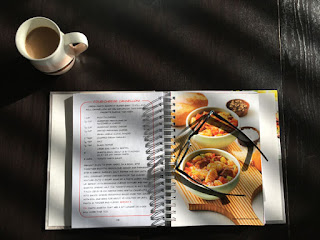 Morning coffee and going through cookbooks for some meal ideas. Today Mum and I went for a pedicure. Lucky us, there wasn't much snow on the ground. 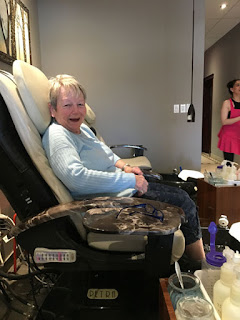 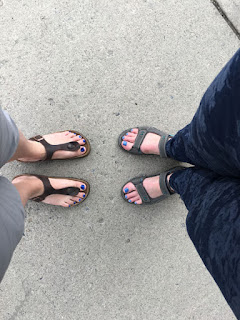 We then went for coffee, but it always seems to take me a while to catch onto capturing the day... 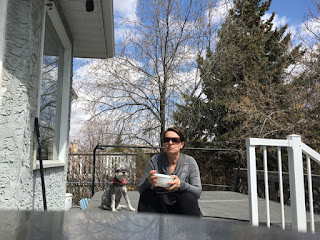 Home for lunch and it was nice enough to enjoy outside. 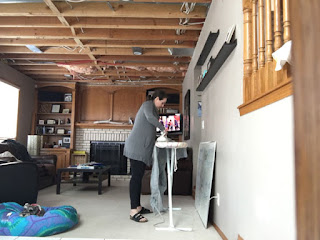 Ironing work shirts. [Yes, we still have no ceiling in the family room. Yes I'd like it to get done. Yes, we are planning on finishing it. Yes, we're kind of procrastinators. Yes, we have the name of a someone who will do it.] But if I'm truthful, I don't even see it anymore, expect when I see a photo of it, and then that's ALL I see... And I'm horrified what people must think. 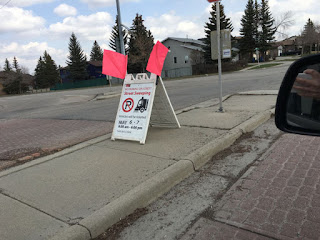 It used to be called street cleaners, now they're street sweepers and it's a less than ideal job. 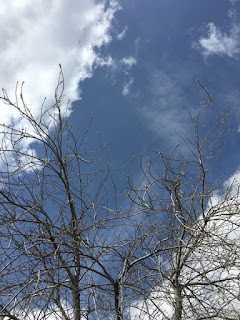 If you look real hard, you can almost see leaf buds on the tree. 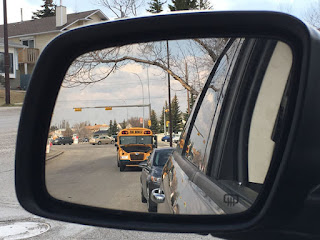 Waiting for the school bus to drop off my girl. 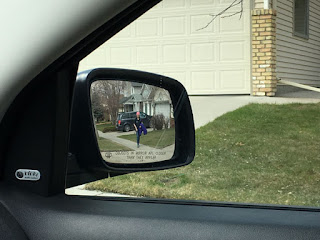 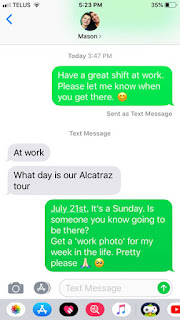 Meanwhile, texting with Mason, he went right to work after school. Tried to get him to get me a few work pics. But said he forgot. Maybe on the weekend.

Dinner tonight for 3 was monte cristo sandwiches. I 'sold' the idea to Madelyn by telling her it was like a french toast ham and cheese sandwich. I was thrilled, because after dinner, she said she really liked them! I'm chalking that up as a definite win. 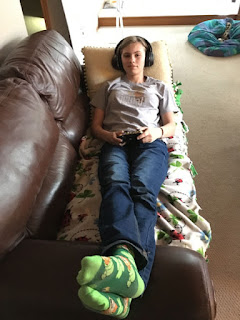 As it's Stanley Cup play-off time, the tv and hockey is usually on. We're all a bit invested the year, because we've been predicting winners and losers. Tonight Boston won, so did Mad.

I took the dog for a walk. [Forgot my phone] 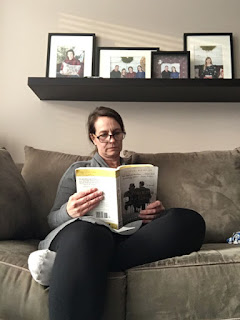 Sat in the living room to read for a bit. This is going to be one of those books, that I won't be able to forget. It's so sad. The books is called We Were the Lucky Ones. It's about WWII and how Hilter moved through Europe. And how people lives were uprooted, because of their religion. It's awful. You think nothing like this could ever happen. And it did. And it still does. 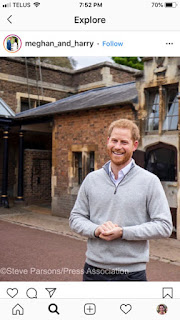 Sweet Prince Harry, talking to the press, about the arrival of healthy baby boy. He's so sweet.

I tidied up the kitchen, getting it ready for tomorrow morning. 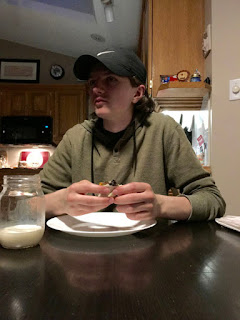 Mason got home from work at 9:30 with a honey siraccha chicken wrap. He ate his supper and then did homework. He has so much homework, which makes working after school a bit stressful.

I'm always so excited to receive Krista's template freebie of the month. 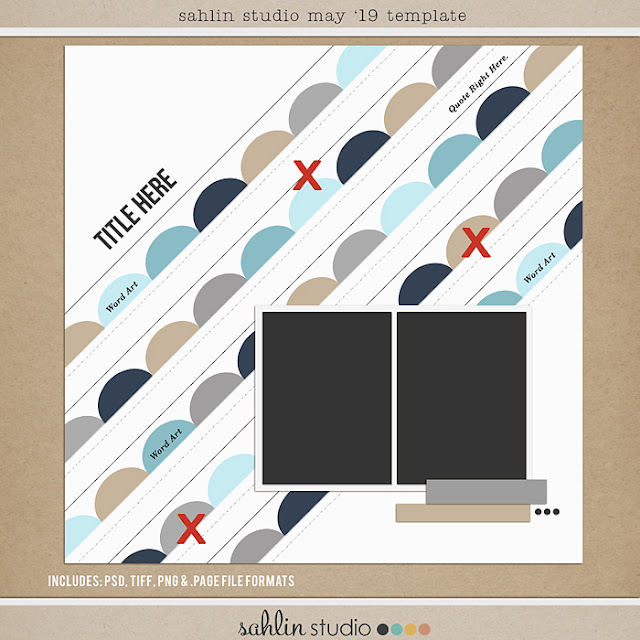 I love the scalloped look of the paper. I really liked how the 'scallops' were grouped together.  I couldn't wait to dive in.

One thing I knew however, is that I wasn't going to create a 12x12 size template. I won't have them printed. I most often shrink them down to 8x8 size, but I didn't want to do that size either. I currently feel like I have too many of that size.

So, I altered it slightly and made it 8x10 size. It took a bit of tinkering, but I don't think I lost too much of how the original looks. Here is my layout, celebrating Miss Madelyn's 14th Birthday.

It just so happened that April 15th was Leonardo da Vinci's birthday. Mad bought and took birthday party hats to school for a group of her friends. Together, they celebrated his birthday. At the end of the day she got off the bus, still wearing her hat.  This kid... She is her own person. As much as it frustrates me sometimes, it is So. Awesome. I hope she will always be her own person and not care about what other people think. Happy 14th Birthday kiddo! I think you rock! 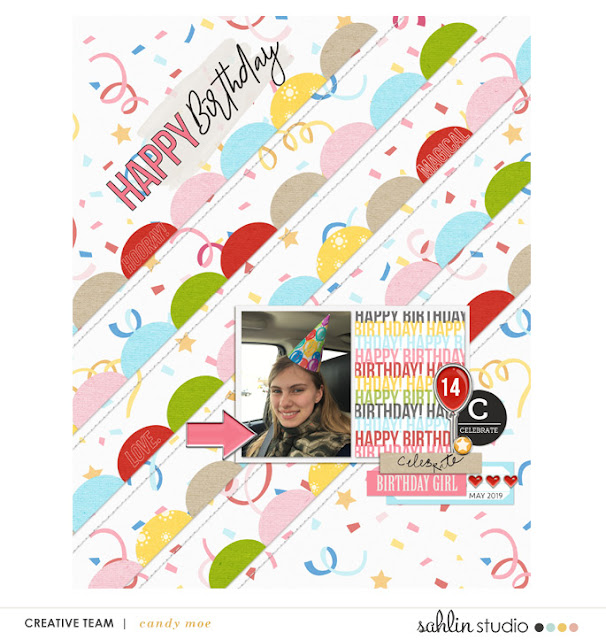 If you read my last post, I talked about the crazy winter snowstorm we had last weekend. Well, I'm pleased to say that the snow is almost all gone now. It's amazing how quickly it melted. The ground obviously needed the moisture.

It hasn't been great weather-wise since however, and we've been told to expect may to be a bit dismal...

I wish they hadn't said that. But here's to hoping the weather people are wrong. But, we don't even have leaves out yet, we are definitely behind. On the plus side, my rhubarb is coming up like mad. Love to see it start to grow. Can't wait to make jams and crumbles maybe even pie with it.

Here is week 15 of my project life album: 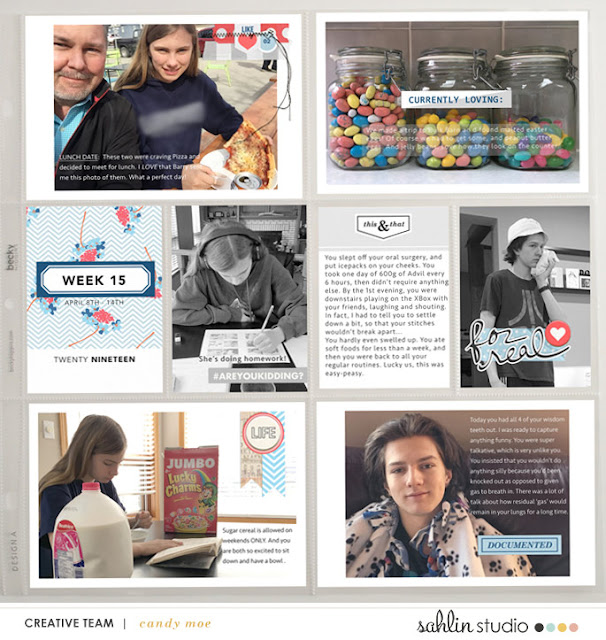