The new oven arrived. And was installed. It wasn't quite as simple as taking it out of the box and removing plastic of course. Is it ever? There was at least one trip to the hardware store involved. There was a jigsaw involved. There was the 'shaving down' of the existing wood involved. But it's in now, its working. And we made our first brownie. The kids are ecstatic. I'm ecstatic. Everyone is happy and the crock pot has been put away for a little while.

Onto some Project Life Pages. 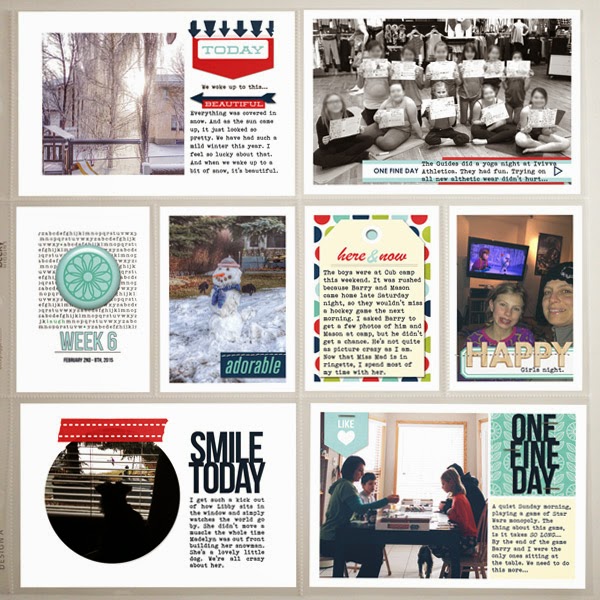 Winter came back this week. We've had an unseasonably warm winter, so it's hard to complain when we actually get some snow, but I do... Thankfully it didn't stick around for long. Girl Guides did a Yoga night at the local Ivivva Athletica store. My sweet girl has never been too interested in fashion and names, and going to a shop like that certainly made me grateful. The boys went on a scout camp, so we had a girls weekend, and I finally watched Frozen. Can you believe that was my first time watching it? Loved it. Miss Libby watching her girl build a snowman out front. Playing Star Wars Monopoly. I'm such a debbie-downer when it comes to game playing, but if you can get me to do it, I usually end up having fun. 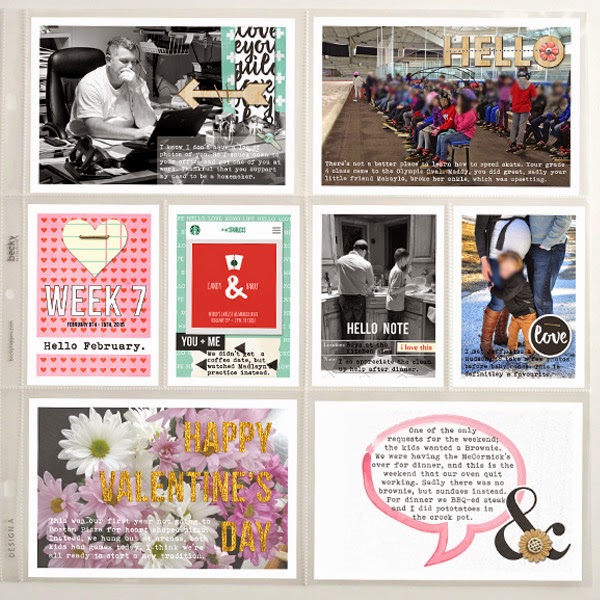 Barry at work in his office. I tend to focus more on the kids and myself in our album. [Of course, every vacation we've taken since the kids were with us, looks like it was just him and the kids, as I'm always behind the camera] I'm making a more conscious effort to have shots of him sprinkled throughout the book. Grade 4's to the Olympic Oval to learn to Speed Skate. Boys cleaning up dishes in the kitchen. An invite to the worlds largest coffee date. Photo shoot of Lisa's baby belly. This was one of my favourite photos.  Valentine's flowers. And a sad little ditty about an oven breaking down.

As I type this, I'm waiting for the arrival of our new oven... 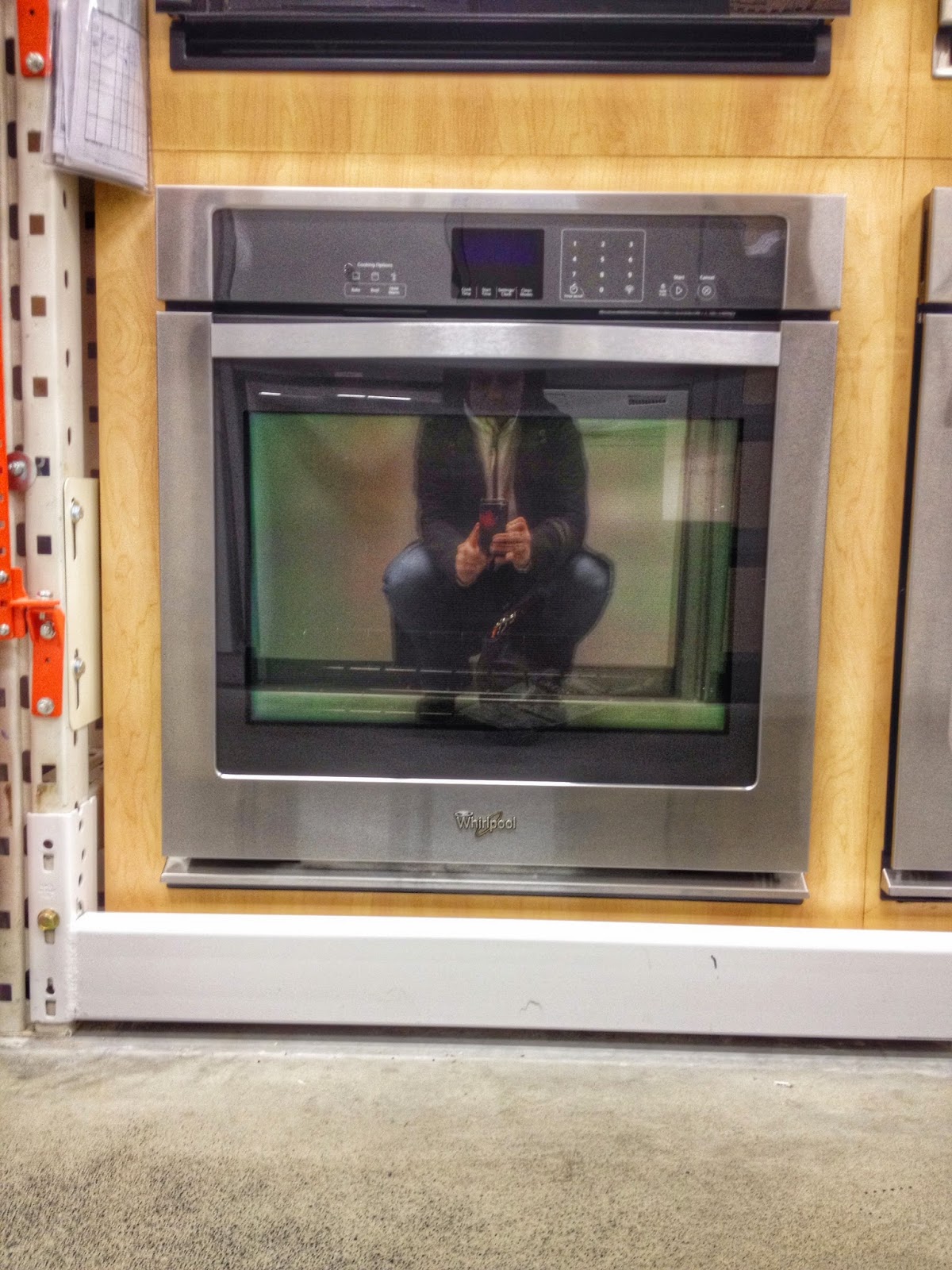 It's going to look like this, only in black.

Am I the only one in existence who doesn't care for stainless steal?

Because we wanted black, it was considered a 'special order'. So there are perhaps a few of us out there, who'd prefer black to stainless. That makes me feel a bit better at least. A bit...Not thrilled about having to wait weeks for it, however.

Today marks nearly 5 weeks since my old oven crapped out. 5 weeks. I was pretty gung-ho at first. I picked out recipes, and we had a fair number of crock pot meals. The weather has been pretty accommodating too, so we've done lots of grilling on the BBQ. But we've also had our fair share of cereal for supper. Yes, you read right. Cereal. The kids think they've died and gone to heaven when they get cereal for dinner. And I think I've died and gone to heaven, because I don't have to prepare a dinner... That will be coming to an end though, very soon.

First order of business. The kids have made me promise them the first thing I would make is a brownie. I know they'll both come home from school today, disappointed. They will have assumed that the oven is here, and they'll have their little mouths watering for brownie.

They will have to wait another day though, our oven is due to be delivered somewhere between 4 - 8 pm. So, in my mind that will be about 8:15 - 8:45. Because I don't know if we've ever been first on the delivery schedule. I'm pretty sure we're always the last ones to be delivered to. In any case, super excited about baking/cooking in our new oven in the very near future!

Here is my layout for week 5. 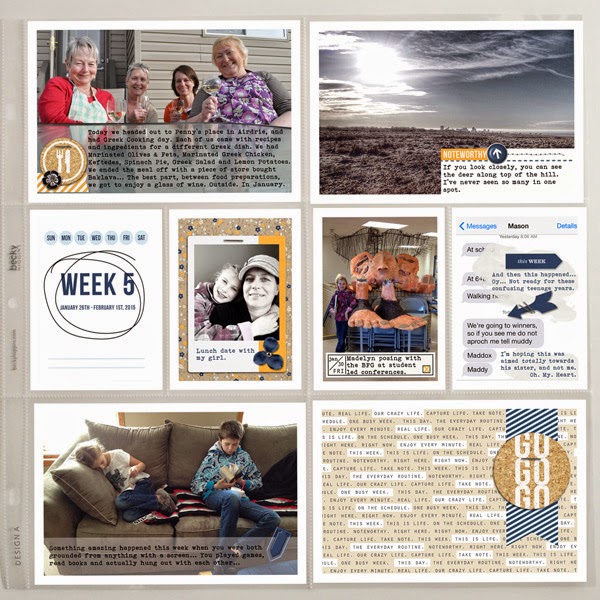 This week I got together with my mum and a couple of her friends and we did a Greek cooking day. It was so much fun. We all brought ingredients to make a particular dish. My dish of choice was Spanakopita, or Spinach Pie. It was yummy. I would make it again for sure. Our walking group met at Nose Hill and we saw a huge herd of deer. Lunch date with my girl. Conferences at the school. A text from the boy, telling me to STAY AWAY... Eeks... Grounded from electronics kids.

The Everyday Routine
Posted by Candy M at 2:51 PM No comments:

So. Our oven died. It died on the 14th of February. It worked fine the night before, and then when I went to use it the next morning and... Nothing. Nada. Over. Done. Died.

I was pretty bummed out, I had planned on making these Ranch Roasted Chick Peas. I'd opened and 'shelled' 2 tins of chick peas, and THEN realized I couldn't 'roast' them. I could have salvaged them, made hummus. I contemplated that for a couple of weeks, and recently, just threw them all away. Sadly, the chick peas were on their way out. Past the point of no return if you will. I just wanted to try those roasted chick peas.

Since our oven died on Valentine's Day. I wasn't able to make a brownie for my family. Which was what they had requested. The only thing they wanted. It was kind of devastating around here. For my family. Me too if I'm being honest... I don't know that I've ever turned down dessert.

We did go shopping, and found and bought a new oven. Which will be here on the 18th of March. Once it's here and installed [fingers crossed] it will be 3 days short of 5 weeks. Without an oven.

Because naturally, there were no ovens available and it had to be special ordered. Of course it did. Because it's a smaller sized oven. Not the norm.

And then, I got a book from the library, that I'd reserved months ago... This one: Sally's Baking Addiciton, and everything in that book looks so yummy, but I can't make anything. And suddenly, I have an overwhelming urge to just 'bake stuff'.

Yesterday I was 2 weeks away from getting my new oven.

Oh. I just remembered, I have a WOK. I haven't used that yet!

That's what the next week will consist of!