Another super smoky week. I have to say from the 7th of August on, it wasn't great.

One day, the smoke was so thick, visibility was terrible. Of course, that was the day, Madelyn was supposed to go to Calaway Park with a friend.  We were disappointed on more than one occasion this summer, because of forest fire smoke.  I hope this isn't going to be our new 'normal' during the summer. It's kind of gruesome. 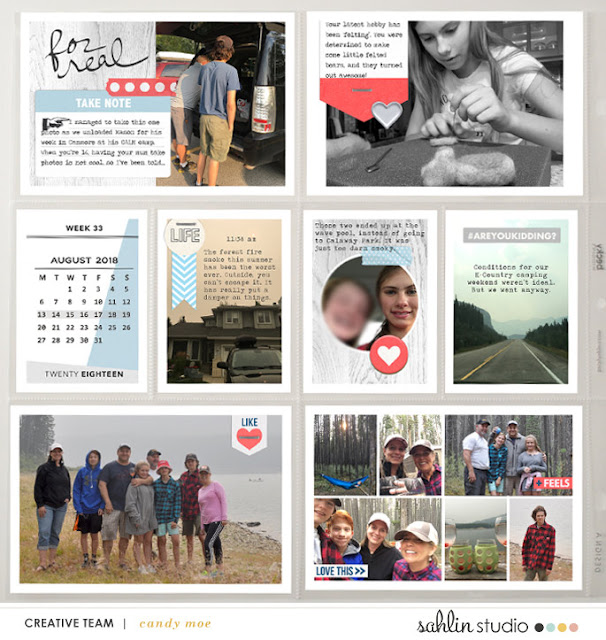 One of the things about being a creative team member for Sahlin Studio, is the awesome product she comes up with. All the time.

Some of my favourites are anything that has to do with Project Mouse. Project Mouse is Disney themed, and there are many different elements to this. All the Project Mouse products are listed in one convenient place, click this link to jump right there.

For the latest Sahlin Studio release, I dug deep into some Disney memories. This was our one and only trip to Disneyland, back in [gasp] 2011.

The kids were so little! It was one of our best trips as a foursome. We had so much fun, to say I wasn't a bit melancholy while creating this pocket page, would be a lie... I mean come on... Mason now towers over me! And I expect by the time she's in grade nine, Madelyn and I will be looking eye to eye. Currently, she's only a couple inches shorter than I am.

I'm so glad that I have digital photos and can go back and create a page like this, that everyone in our family gets so much joy from.

And we definitely need to get busy and make plans for another trip as a foursome, to the Happiest Place on Earth... 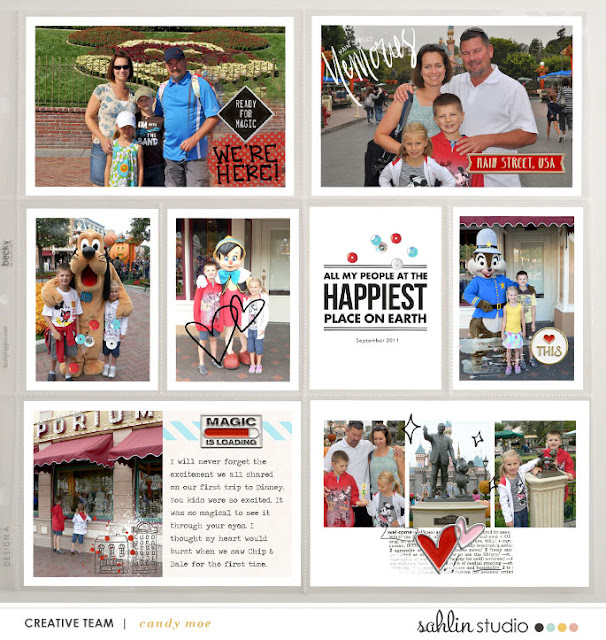 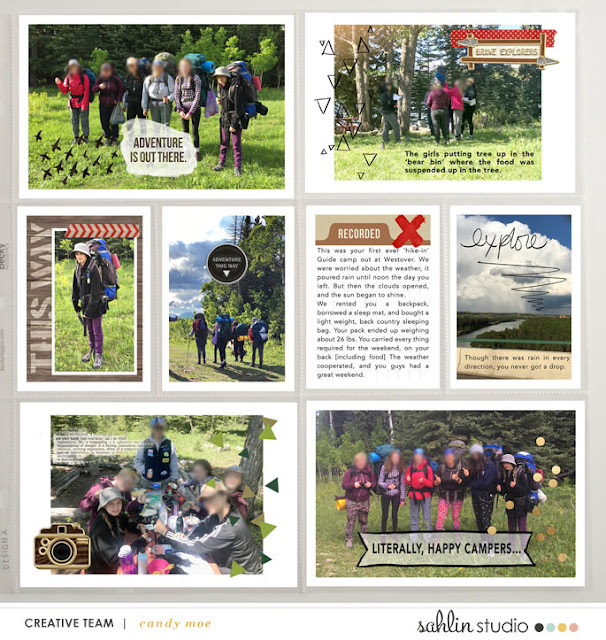 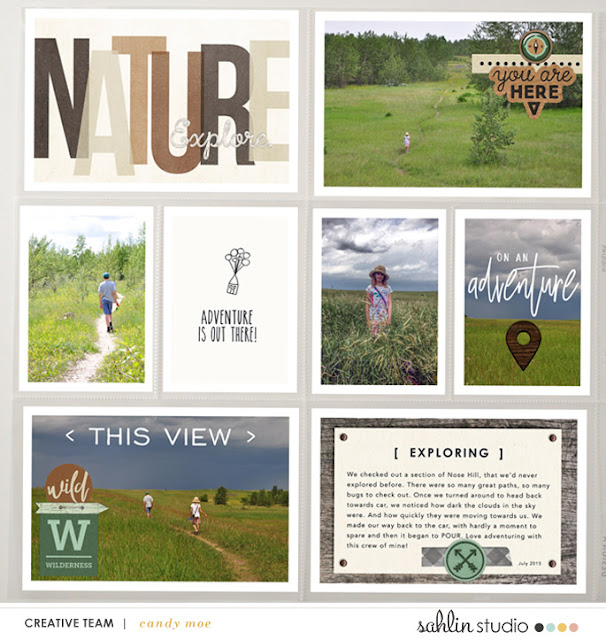 Here are some other layouts I've created using Project Mouse. Some from Disney, and others not. [This layout, from Thunder Mountain, remains one of my most favourites of all time] 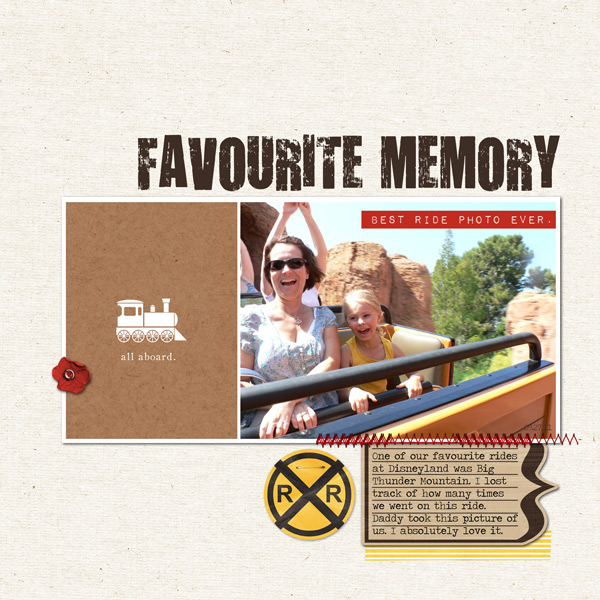 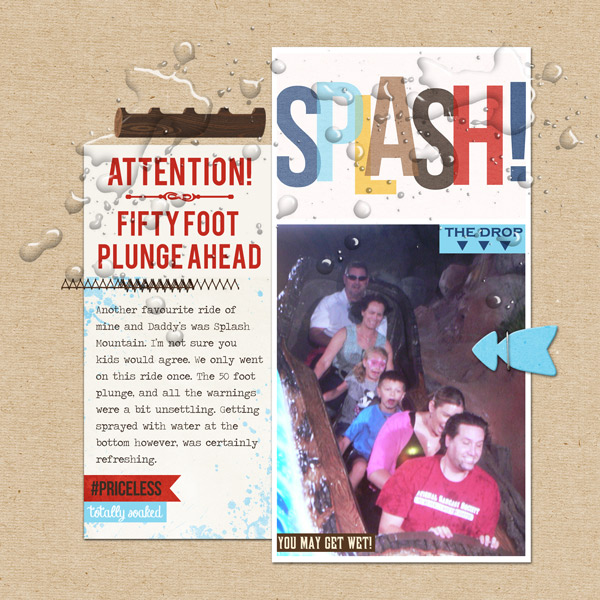 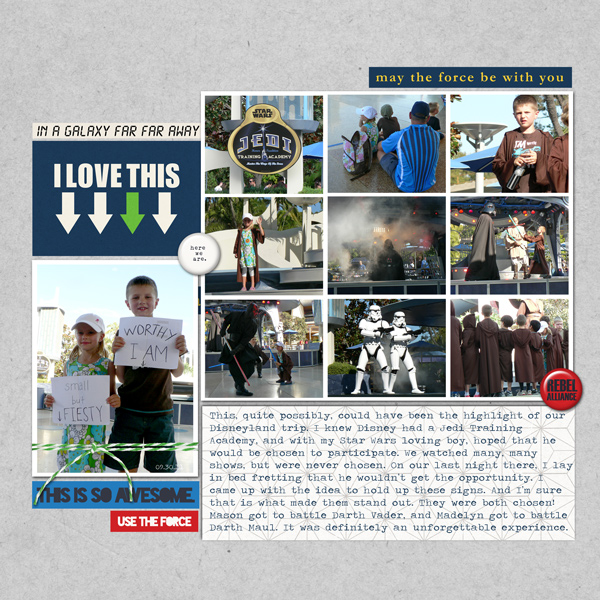 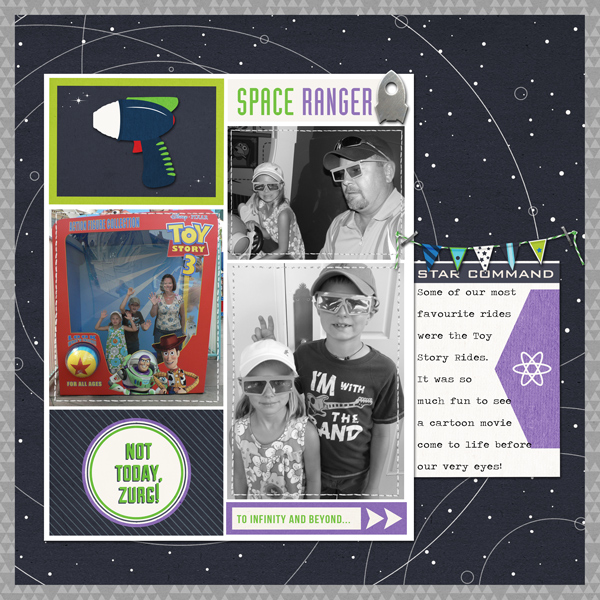 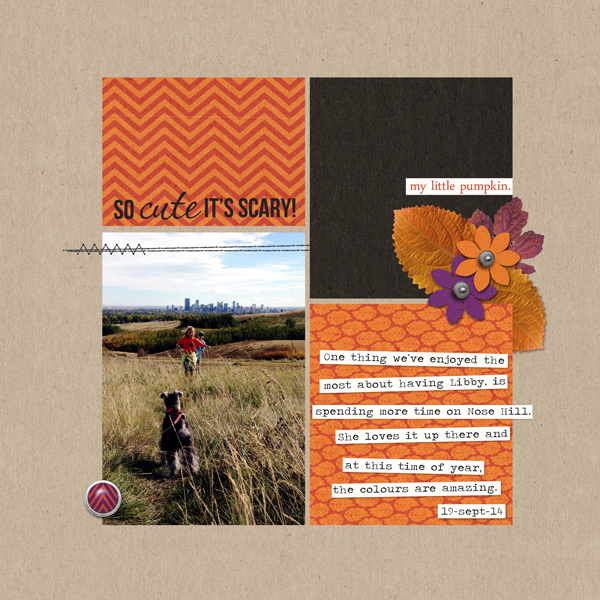 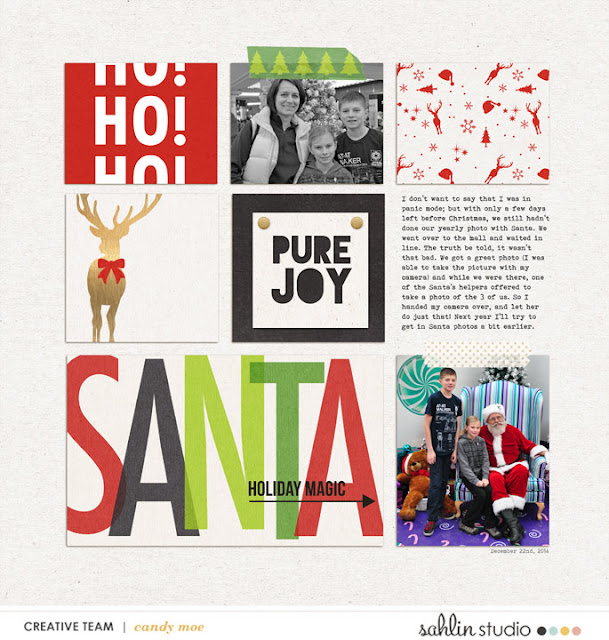 Project Mouse - Christmas
http://sahlinstudio.com/project-mouse-christmas-edition-freebie/
Posted by Candy M at 9:45 AM No comments:

This summer, we had some hot days.

So not the norm for Calgary. If we get up to 30 degrees, that's usually something worth talking about. But to well surpass 30 degrees, for a number of days in a row, that is highly unusual.

For another summer, I lay in bed many a night, unable to sleep, wishing we had air conditioning.

Then, without notice, the weather changed.  I once again find myself bundled up from head to toe in polar fleece...

8 degrees Celsius seems much warmer, almost tropical, after you've had a winter of negative double digits.

However, when you're summer has consisted of temperatures in the high 30's, and seemingly overnight you plummet to single digits numbers, it's like you've been thrust into the arctic circle.

At least I have my photos to go back and look at, to remember exactly how warm it got this summer. 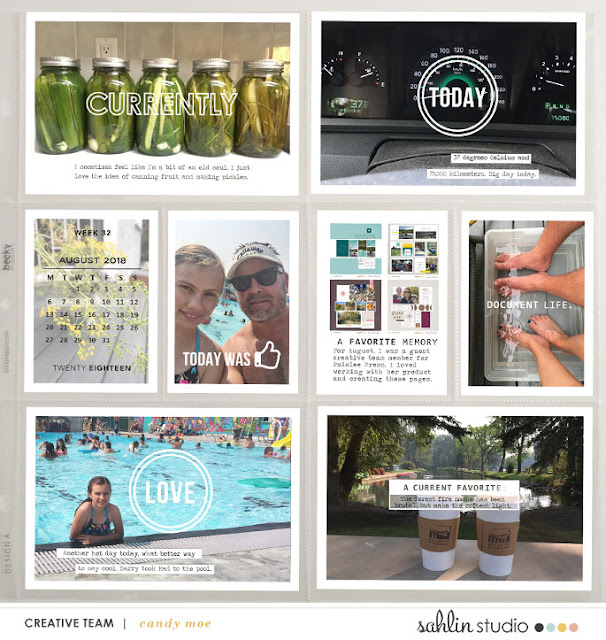 Here is the most recent page to my project life album. It's so, so simple, just basically photos and words.

Sometimes that's all you need.

This week saw another big portion of our plumbing renovation done. After this weekend, we were definitely more than half-way done. 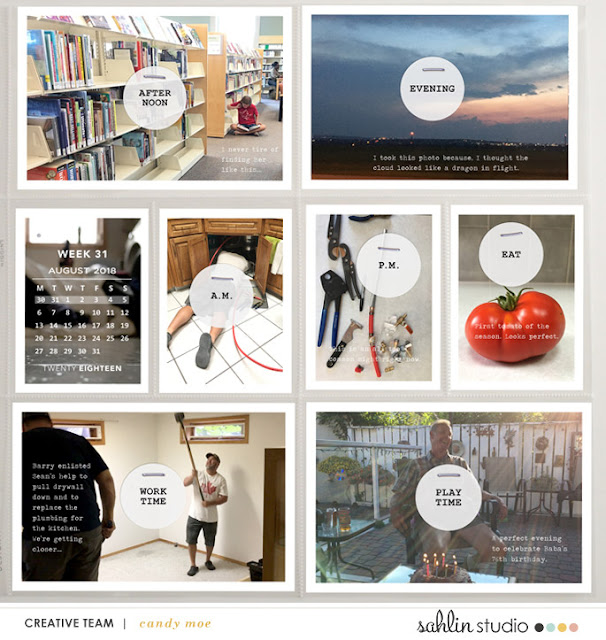 Well, we've got the first week school under our belts.

First day as a Grade 8 student. Madelyn leaves the house at 7:05 this year, which hurts. It's a smidge earlier than least year. School times and bus pick up times have changed. We made it though. She got up 4 mornings, without too much fuss. She even let me do her hair. 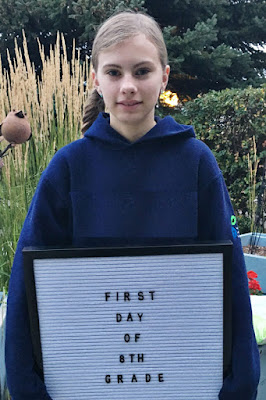 This one lucked out, he didn't have to be at school until 1:50. What's the point even? But he got to have one last sleep in, waking up well rested and ready to start school the first day of Grade 11.  Grade 11... That has happened shockingly fast. And that hair... Crazy boy definitely has the hockey flow going this year. 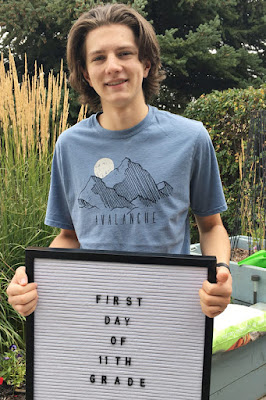 We've also been eased back into our schedule rather slowly. Just school this week, with no commitments in the evenings. We didn't have our first ice time until Friday night. In the past, we hit the ground running, the first day of school. So this was very appreciated. We will now be on the ice until March.

Last year, on the first day of school it was hot. 30 degrees Celsius. This year, it was not. I think the high was 13 degrees. It was chilly, rainy, windy and cold.

It warmed up by Thursday and Friday [the photo below was taken Thursday morning, it's of the Peace Bridge downtown] but the damage has been done. Trees are changing colours and the leaves are dropping like dead flies. 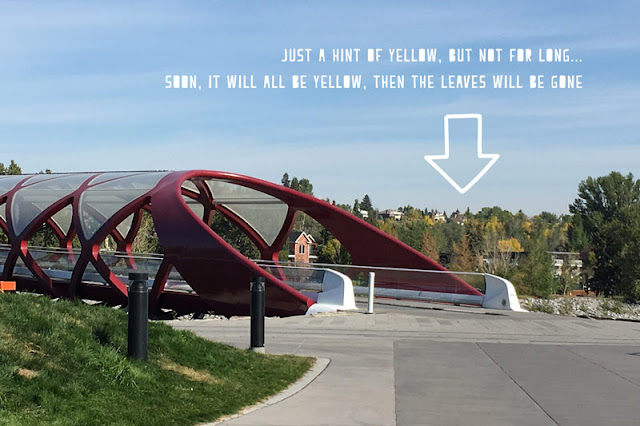 I want to love this time of year, I really do. But I know what comes after fall... The colours are lovely, and it's so pretty, but once the leaves are gone, the snow comes. My entire backyard was full of snow back in April. So much snow, I thought it would never all melt. And people, I don't have to tell you, that was only 5 months ago...

So the idea of snowfall and shovelling, well it doesn't really appeal.

Speaking of snow, Ali Edwards December Daily is all the rage and trending currently. Kits went on sale Wednesday. I LOVE Ali. She has been such a huge inspiration to me over the years. I realize that this is her business, her bread and butter. It just seems like her prices are always creeping up.

Initially, you bought the December Daily kit. The first time I did that, it included an album, page protectors and all the papers, journal cards, embellishments etc.

Then it was changed up, and you could buy all the pieces separately. You could choose between different albums, main kits, mini kits, embellishments, it became quite the ordeal.  Why would I not automatically want an album to house everything? It seemed strange to me, that the album didn't come included. [And if you remember, last year, my album fiasco, I thought I'd ordered one, but somewhere along the way, de-selected it during the ordering process] Last year, the December Daily seemed rather crazed. Only 'limited amounts of this and that'. Only so many albums. Stock was not being replenished. I got caught right up in it, and it was stressful.

This year, I watched a bit warily, as the December Daily hype started to build up toward the end of August. Again with the limited product available. Again with the mark the date and time of release on your calendar. Now you were to 'refresh' your screen lots, in case something became available, after another customer 'accidentally removed it from their cart' [I joke]

But here's the thing. 6x8 albums this year are selling for $24.99 each. Yes, it includes page protectors, but that seems really steep to me.

This year, I'm going to create my own December Daily album. I have several album options. I will plan on preparing it before hand, like I have in the past. I have enough left over DD supplies from past years, that I'll be able to add a bit of flair here and there.

What I've realized, is the most important thing, is to get the stories down. It really doesn't matter what I use to do that, as long as I do that.

I'm already looking forward to this year album and stories.

Today is September 3rd. And it's a miserable day. Cold, grey, rainy. Just yuck. But it seems right in line with the 'mood' around here.

Tomorrow school starts back. Grade 11 and Grade 8. Eeks! No one seems overly thrilled to get back at it. Though I'm ready to get these kids back into a bit of routine, I'm not looking super forward to 6 am get ups... Gross.

We had a great summer. Could have definitely done without all the forest fire smoke, that settled over the city in August. But temperature-wise, no complaints here. It was hot enough, that Barry and I wondered yet again, if we should invest in an air conditioner for the house. The upstairs was above 28 degrees Celsius more than it wasn't, this summer. Or so it seemed. So hot to sleep.

The last week or so, it has cooled off considerably. Leaves on the trees are beginning to change. Which seems earlier than usual. Wondering if it's the cooler temperatures, and perhaps the smoky days that has helped this process along.  It was dark and dreary on a few of those bad smoky days. Perhaps that's all the trees needed, to nudge them towards fall.

I do hope we get a reprieve. I hope today's grey and chilly morning is just a blip on the screen, and that we have a great September and October. Rumour has it, that we're in for another killer winter... So it only seems fair, that we get a nice fall. Fingers crossed.

This layout is using Septembers featured product Simplify. I have included the links below. Through September, the kit and journal cards and be picked up for 40% off! Awesome!

Here is my layout for Week 30, which takes us back to the last week of July. A warmer time for sure! 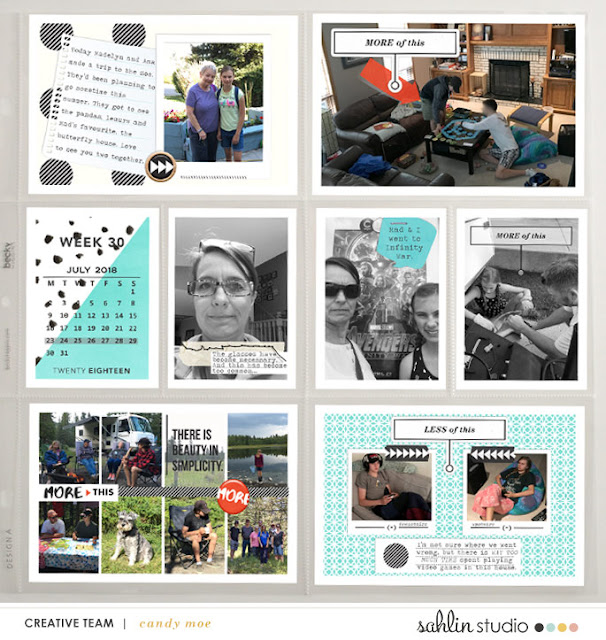