I have 2 new layouts to post, going back to weeks 9 & 10. We've been finished with hockey and ringette for 3 and 4 weeks, respectively.  Yet, looking back at these photos, it seems like it's been
F O R E V E R since I last sat in an arena. Which kind of shocks me, because I realize what a big part of our lives it's become... 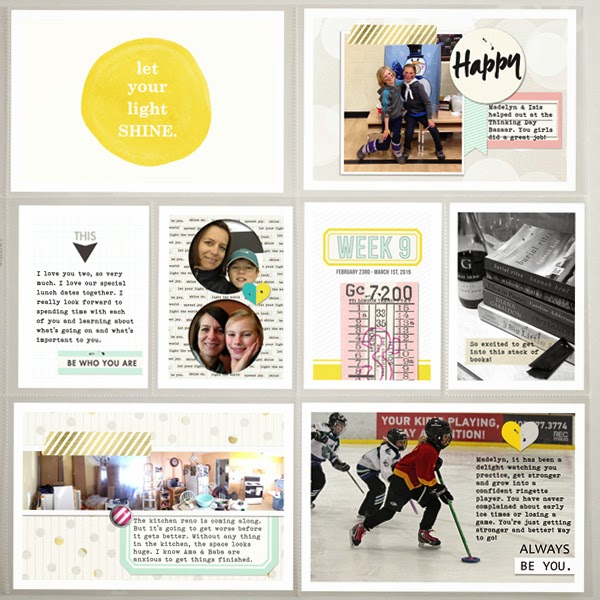 This week: Madelyn and Isis at the Girl Guide Thinking Day Bazaar. Only 2 of the girls from our unit came and helped out by working at a station. [Both girls had their faces painted like cats. The pink noses didn't come off completely for days.] Picture of me with my lunch dates. A stack of books I'm ready to read. A panoramic photo of my M&D's kitchen, smack dab in the middle of a renovation. And Miss Madelyn, heading towards the net with a ring. 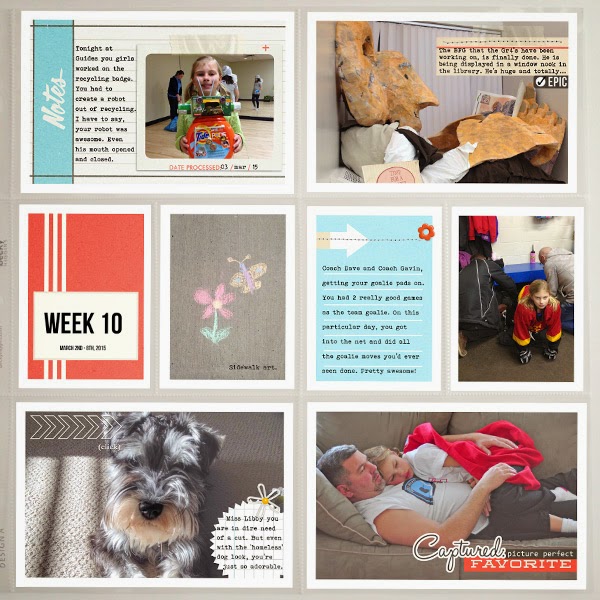 This week: Once again, Girl Guides, tonight the girls worked on their recycling badges. Mad's group created this 'robot' out of recycling. The BFG created by the grade 3/4's. He is AWESOME. Sidewalk art, a lovely sign of spring. Goalie pad removal, you had a 2nd chance as goalie and did great. Not feeling well, hanging with your Daddy on the couch. I certainly miss when this was regular sight...

We have had an awesome winter. And by that, I mean, hardly any snow.

I'm very grateful. I don't mind the snow, but I would definitely prefer if it stayed just west of the city.

Our Easter weekend was slightly dismal. It snowed on and off, and the days were grey, but it's pretty hard to complain after the winter we've had.

Any way, here is week 8 of my project life album: 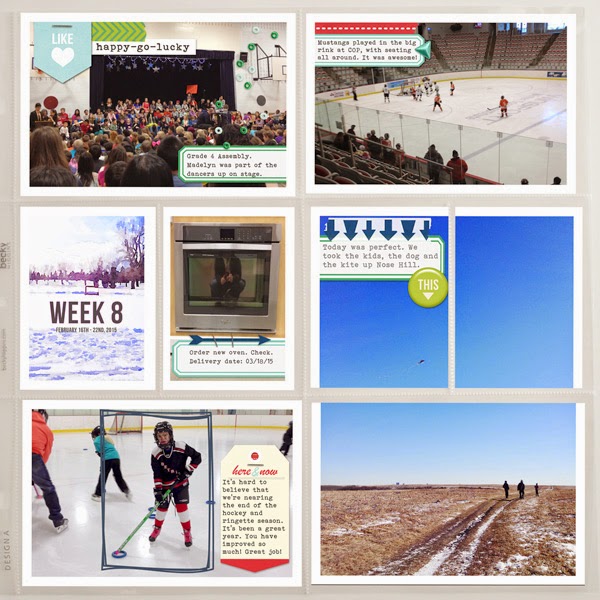 This week, the grade 4's hosted an assembly. They learned the song safe and sound, by Capital Cities and sang it to us. Miss Madelyn was part of the dance group. Boys played a hockey game at the big ice at COP [where Team Canada plays/practices] It was pretty cool. They won the game, and therefore won every one of their games. On to city finals! A shot of our new oven, which had to be ordered. And we picked black, not stainless. A ringette practice. Flying kites at Nose Hill. Libby loves having all of us out on a walk.