We recently bought a new computer.

I've been having heart palpitations ever since.

I think we bought an iMac mini. Think, being the key word.

It makes sense to head towards the Mac, as we're a household full of iPhones and iPads, but I'm still freaking out a little bit.

I'm a PC girl. It's what I know. It's all I've ever known. So the learning curve seems huge.

Any way, right now we're in the process of 'migrating' information from the PC onto the Mac.

I'm excited because I finally finished my December Daily book. It will be awhile before I can share it here.

I've also got the first few weeks of this years Project Life album done. Again, it's going to be a bit before I can share it here.

But I will as soon as I'm able to.

Something happened in these last few weeks of last year.

I kind of got disinterested in picture taking.

It was that way over the Christmas holidays too. And while I knew it was happening, and I knew I would be disappointed with myself, for having hardly any pictures, I didn't care.

I decided that this Christmas, I was going to be present.

I wasn't going to go running for my camera all the time. I wasn't going to say, 'wait, hold that up again.' 'That picture didn't work, let me get another.' etc. All those kinds of things you say, when you're the picture taker. When you're trying to get just the right photo.

Taking pictures is awesome. But you tend to miss a lot too. You might not think you do, but when you're busy with a camera up to your eyes, trying to 'catch the moment' you sometimes miss the other moments.

I wonder if the kids even noticed... I don't think they did. Nothing was said about it any way.

And I am terribly disappointed with the lack of photos taken from the middle of November through December. By the end of November, I had no memory left on my iphone 4S, so I hardly took a picture with my phone. My big camera has started giving me an error message, which I thought would be rectified by purchasing a new SD card. Sadly, I still got the error message. I've done done some investigating on line, and the prognosis doesn't sound promising.

Thankfully, I've got the itch again. I don't care for 'gaps'. So that spurs me on to be more diligent with taking photos.  Mason has grown tiresome of the never ending picture taking, but thankfully Madelyn is still game. So, I will keep  taking photos...

I've attempted to clean my camera, according to what it said on the internet, and hope for the best. Wish me luck!

Here are the last few weeks of my 2015 Project Life book: 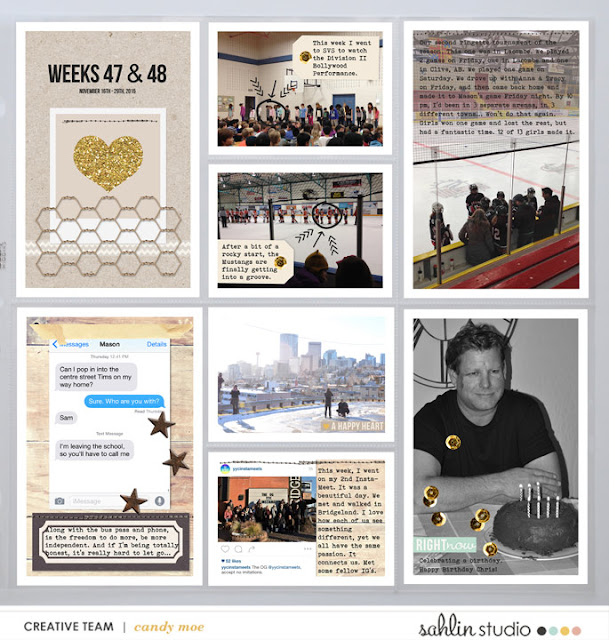 Because of my lack of photos, I chose to combine a couple of weeks.  This week there was a dance assembly at Madelyn's school. We went to Lacombe, AB for a ringette tourney. I went on a Instameet to Bridgeland, celebrated my brothers birthday, and included a text from Mason. 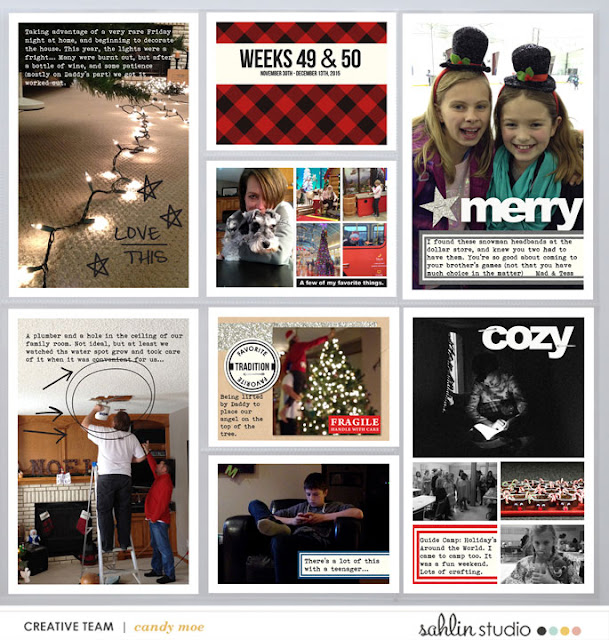 These couple of weeks included several different snippets. Decorating the tree, a visit to Santa. Sisters at a hockey game with matching headbands. The water leak in our family room. What living with a teenager looks like. A collage of Madelyn's Girl Guide camp we went on in December. 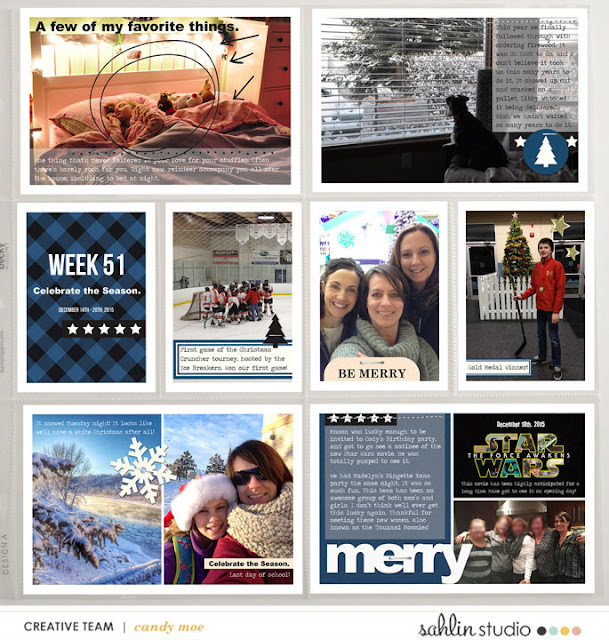 The girl in bed, with all her favourite stuffies. Libby watching wood delivery take place. 1st game of a hockey tourney. Coffee with friends. It snowed! Which means we'll likely have a white Christmas. And of course the opening of Star Wars [that Mason got to go to on opening day] and our ringette Christmas party. 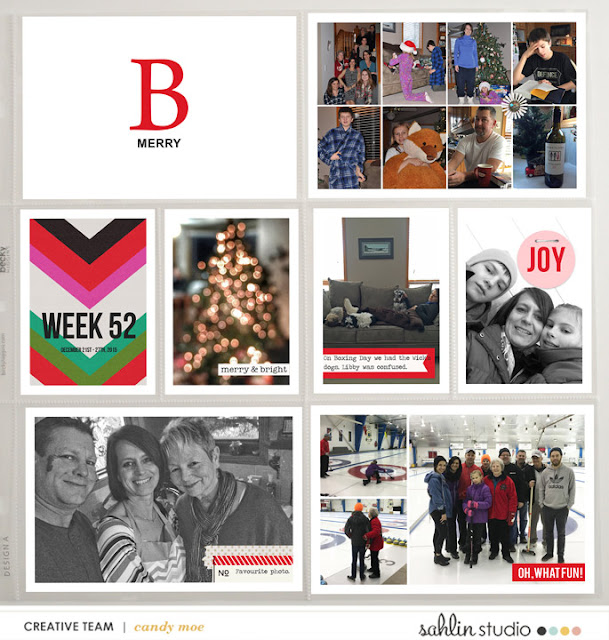 This is the week I'm most disappointed about, as far as lack of photos. I just wasn't in to it. Of course, now I'm kicking myself... I will keep that information tucked away for next year. So if I'm ever feeling that way again, I'll remind myself how disappointed I was to not put the effort in.

Having said that, we had a nice Christmas. Madelyn woke up sick on Xmas Eve day, with a cough that reminded me of croup. Her and I didn't participate in the family skate that usually happens. Mason got sick a couple of days later, and had a hard time shaking the cough. He was at his worst on the 27th, which also happened to be the day we began a ringette tournament.

It's awesome to be done another year of project life. Now, to catch up on my December Daily stuff...

I'm almost caught up and finished my project life album for 2015.

It feels so good to be done.

I wonder on occasion, if I should continue doing this, then I look back at past albums and realize, yes of course I should. I will.

What seems trivial and mundane, every day, is a memory I can go back to each time I pick up a past book. Photos accompanied with a little bit of documenting, I've discovered that I can go RIGHT BACK, to a particular moment.  One thing creating these albums has done, it's made me realize just how quickly time goes by. The days, the years... It's a whirlwind, for sure.

When Mason was a baby, before digital cameras, I estimate I took a roll of film every month, maybe a roll ever two months. I have 2 or 3 photo albums of baby Mason. When Madelyn came along, I got my first digital camera... Rather than 24 photos a month, or 2 months, I took hundreds of pictures... Well, the poor girl has never made it to photo albums. Don't get me wrong. I have scrapbooks, and baby pages, milestones recorded. What I don't have is the candid photos of her those first few years. Well, I have them... Just not in albums.

I love photos. I love photography. I love memories. This documenting a year at a time thing is totally my jam. I'm still loving the format of one page per week, rather than a two page spread. I plan to continue on with this style of memory keeping.

I plan to look back and be grateful for all the every day stuff that I've captured. Stuff that you forget about. That seems mundane at the time.

Here are weeks 42 through 46 for your viewing pleasure: 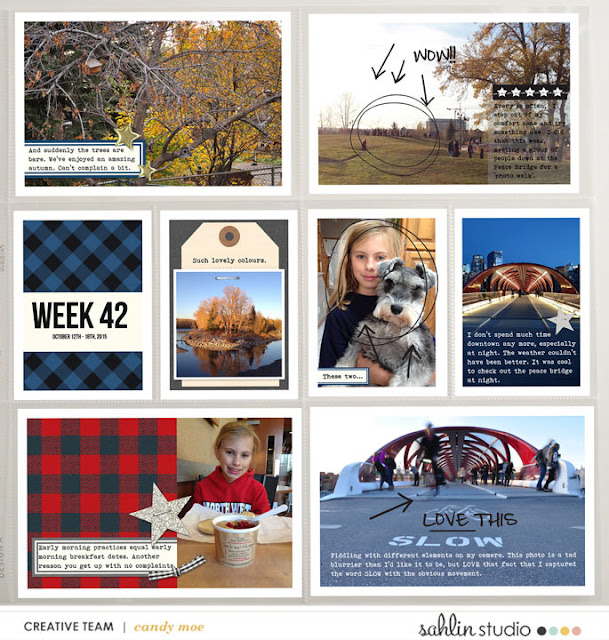 This week we were still enjoying our awesome fall. I Sahlin Studio Mad for Plaid line. It's designed to be a Christmas kit. I'm looking forward to using it for Christmas too! Libby tolerates being picked up, but doesn't love it. Peace Bridge lit up at night. Early morning practice and breakfast. 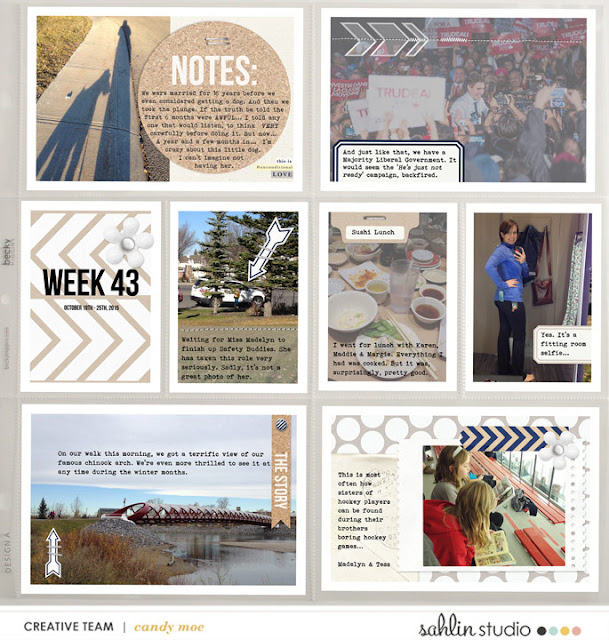 I love the long shadows of me and Libby going for a walk after the kids are off to school. The results of our Federal Election. My girl doing her safety buddy thing at school. Lunch with some mom friends. A fantastic glimpse of our chinook arch. Sisters at their brothers hockey games. 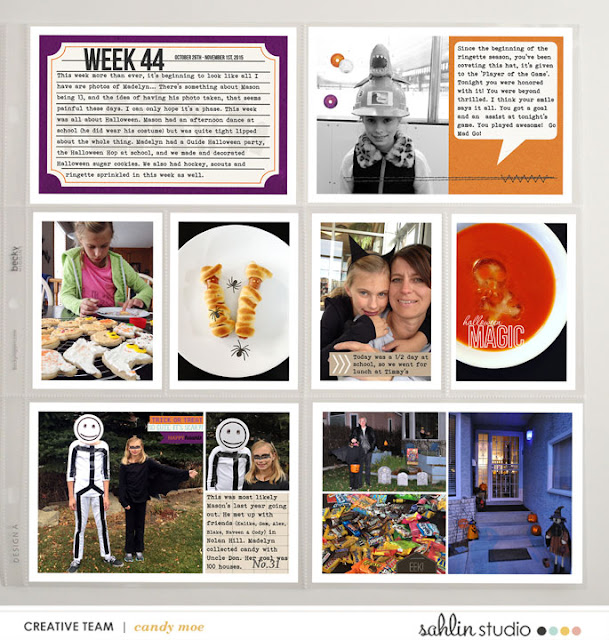 The week leading up to and including Halloween. 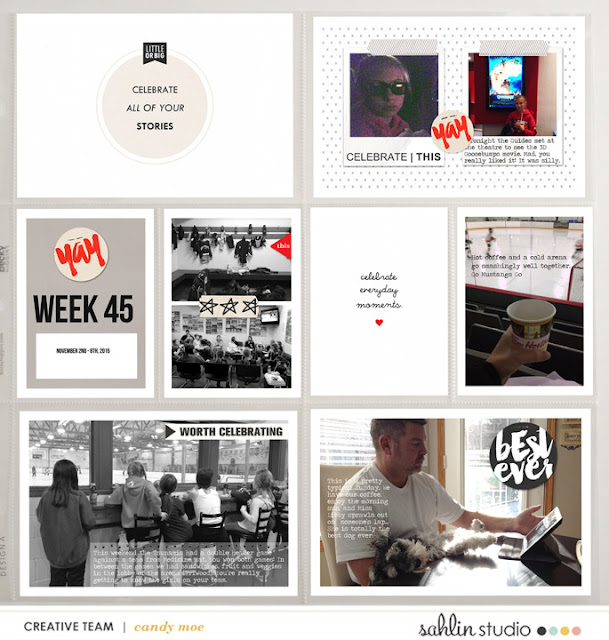 A Girl Guide outing to see R. L. Stine's Goosebumps movie. Back-to-back ringette games. Coffee and hockey [the two go hand-in-hand] Barry and Libby. He has yet to admit it, but he LOVES this little dog.. 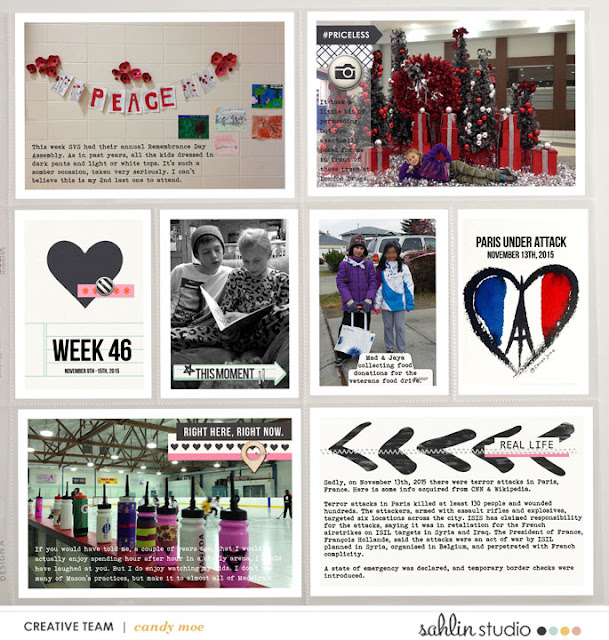 We went away for a few days. To the mountains. We got in some skiing and enjoyed some long awaited down time. I sat in the lobby one morning, drinking my coffee, waiting for my family to wake up and join me. While sitting there, I realized something.

I was enjoying the crackle of a fire in the fireplace. I watched as guests came down for breakfast. Early morning skiers headed for the hill. People dressed warmly headed out for a morning walk in the mountains, breathing in that fresh mountain air. As a blend of late 80's music was being piped through the lobby (which indeed made me feel right at home) I realized that one of the things that was making this moment serene and enjoyable was the fact that there was no gigantic TV.

Everywhere we go these days, everywhere, we are assaulted with TV. It no longer matters where you are, we can't get away from the TV. Sadly, we all turn into zombies, staring at whatever trash we're being shown. We can't seem to help it. We just look and stare.

I for one, am definitely alarmed about this. The generation of kids growing up now, can't seem to be idle. They simply can't. And let's face it, there are many times in our life that we need to be idle. To just be. I think one of the greatest things we can teach our kids, is how to just 'be'.

I'm not saying that my family is the exception. I'm not saying that we are exempt from screens. I wish we were, but we're not. We try to limit 'screen time' in our house. We do great for a little while and then slowly things slip. More and more time gets spent playing video games or watching TV shows of pure rubbish. But we do try.

And having said that, I too have become accustomed to this technology at my fingertips. My phone or iPad. I have to remember sometimes that the rules apply to me as well. I need to just be idle sometimes.

Or read a book. Made from paper. With pages that turn.

But I have to say, it was lovely to enjoy a few days in the mountains with very little distractions. 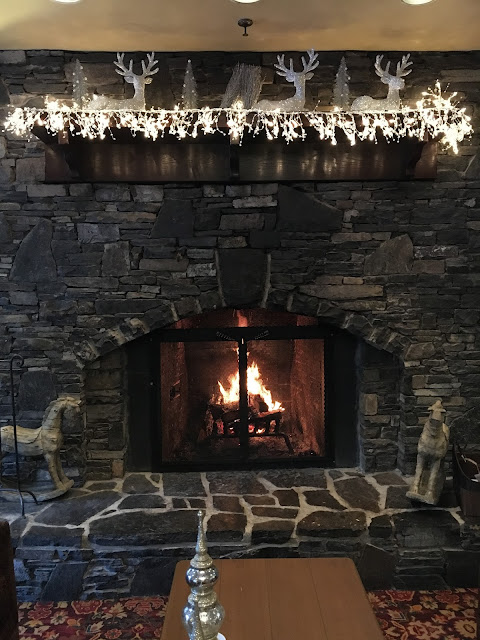 The lovely wood burning, fireplace, in the lobby of our hotel. Love the snap and pop of the real wood burning. 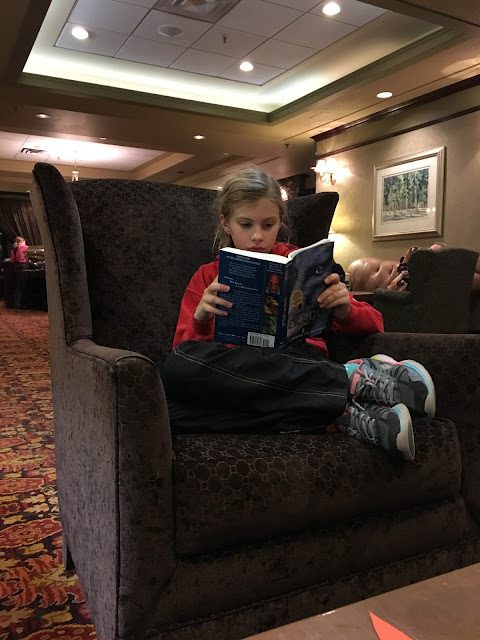 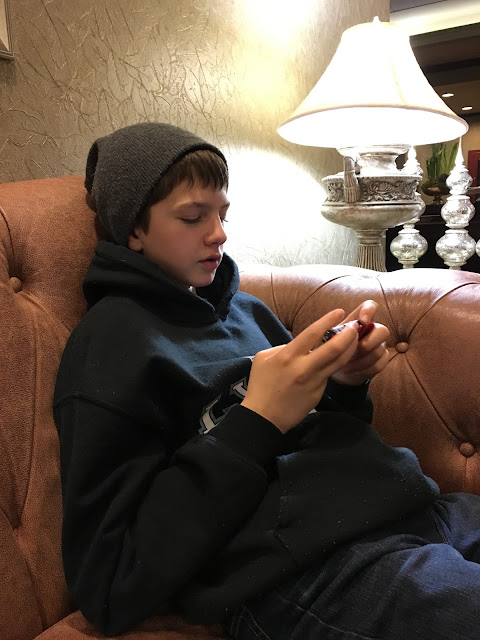 And here's my teenager... And he does have his device with him. But I didn't get a photo of him just hanging out, and didn't want him to be too left out. 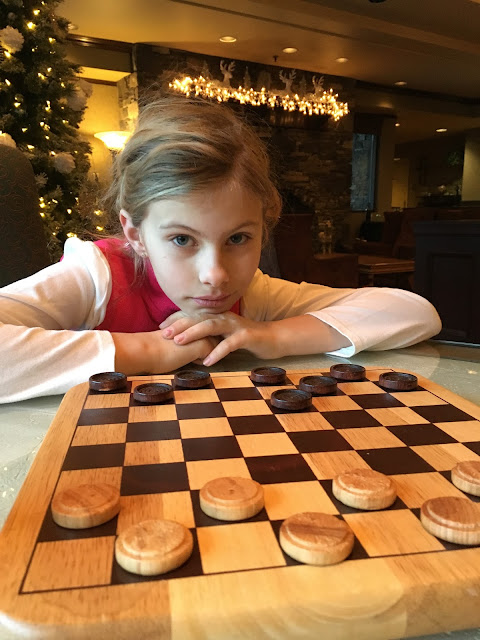 Playing checkers with my girl. Not sure that we were doing it right, but we were having fun.