I'm attempting to catch up on my project life pages here on the blog.

My next few project life posts, will be grouped together. I haven't decided how I'm going to handle December yet. In the past, I've done both a December Daily Album, as well as kept up with my project life... Such a predicament to be in...

I'm already behind the ball with this years DD Album. So far, I've only created a title page. Eeks... Since I've done these albums, I've managed to have foundation pages done before hand. This year will be a slightly  new approach. I hope it works out. I adore going back and looking at past albums, so I know I'm going to do my best to complete this years album.

That said, there may be some late nights involved. And I'm okay with that. 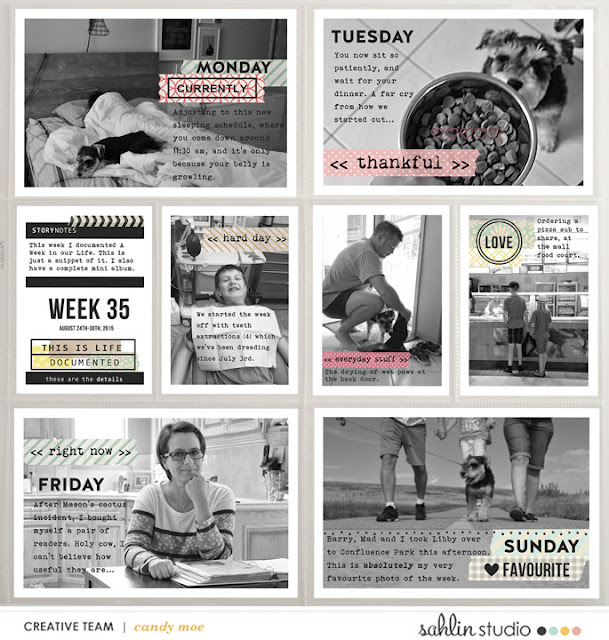 This was the week I chose to follow along with Ali Edwards famous 'A Week in the Life'. To some it may seem redundant. But to me, it goes into our daily life in much greater detail that I normally document. This is another project I love and have been doing for multiple years. I love to look back and see how things have both changed and stayed the same over the years. Many of the photos on this layout, were also used in my WITL album. I've nearly completed the album, though I haven't shared it here on the blog. As always, it's a huge effort, but to me, totally worth it once the project is completed.

I didn't follow along the same week Ali did hers, because the kids were in summer camp. I thought if we were documenting the every day, it seemed to make sense to have the kids more included, since they're home for summer vacation. 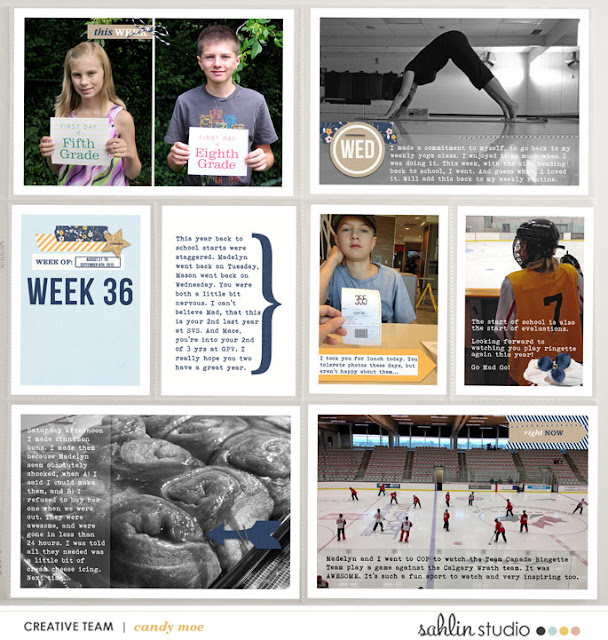 This week the kids started back to school. I started back to yoga. Ringette evaluations began the day school started. Hockey evals were later this year, due to the fact that Mason moved up a division into Bantam Hockey. We were definitely lulled into a false sense of 'non-busy' for the first few weeks of September. I have to say, it was a nice way to ease into the school year. I made home made cinnamon buns, that were devoured in 12 hours. Madelyn and I went to COP to watch the Calgary Wrath ringette team, as well as the Team Canada ringette team, play in an exhibition game. It was AWESOME. 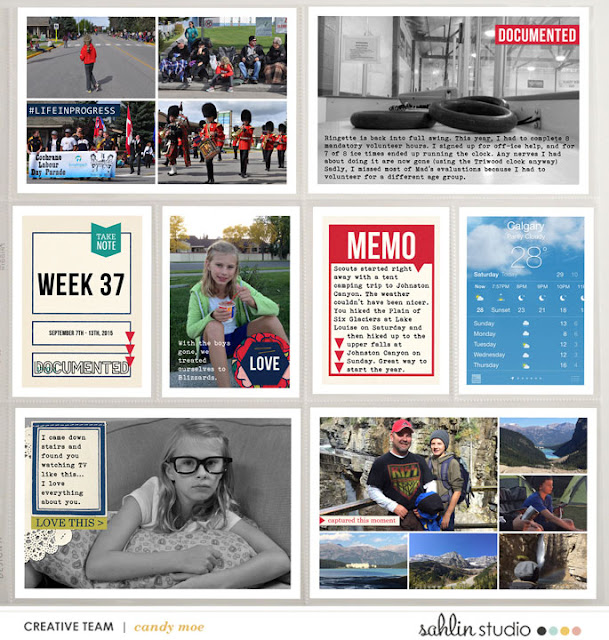 We started off Labour Day with the Cochrane Parade. Once again we lucked out on the weather, but for the very first time, the parade was mediocre... As part of our ringette commitment, I had to spend 8 hours of my time, helping out during evaluations. I did a lot of time keeping... And I also spent a good portion of the month shivering. The boys did an early Scout Camp, and went to Johnston Canyon. They couldn't have hand picked a nicer weekend. Lucky for them!

I recently completed two layouts. I'm pretty well current with my scrapbooking, though I do have a load of pages to print off. To print 12x12 pages in Canada, it's gotten a little bit ridiculous cost-wise. In the past I have ordered from Persnickety, but they've increased their international shipping fee. The last time I ordered from them, I thought the product was just kind of 'meh'. Certainly not their best quality. Now, add our poor dollar and exchange rate. I simply can't justify paying for a product I'm not happy with.

I'm contemplating whether or not I should scrapbook my pages as usual, and then create a photo book with the pages once a year. It's not quite the same as looking through an album... But the memories come back, no matter what the format. Something to consider...

I have recently created a lot more 8x8 sized layouts. This size is a lot more reasonable to print off.

Both of these layouts are 8x8 size.

Both of these layouts are Sahlin Studio templates. Both originally 12x12 format. I just altered the sizing, and I'm happy with how they turned out.

This layout, Best Field Trips Ever, is Sahlin Studio Template Freebie, free for the month of November only. You can find it here: Sahlin Studio November Template. 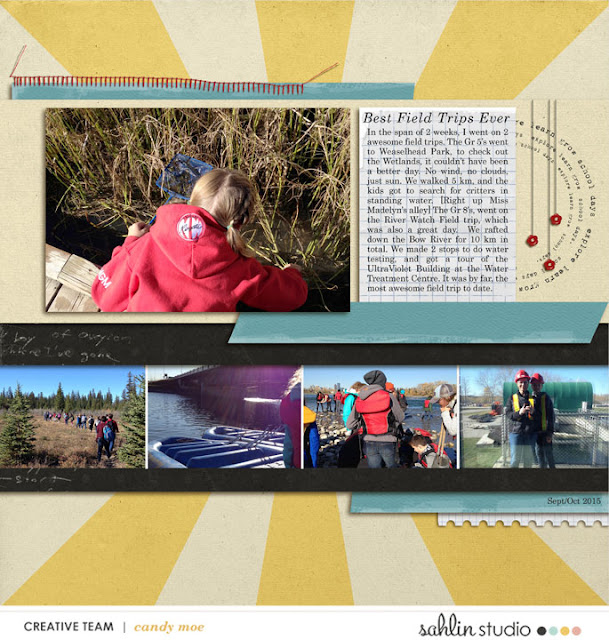 I'm not kidding when I say these were the best field trips ever. It's taken until grade 5 and 8 to have 2 awesome field trips, both within a week of each other. They were also the best, because the weather was AWESOME. I doubt I would have enjoyed either as much, had the weather been foul.

The next layout, Horse Camp is another template originally 12x12, that I altered to 8x8 size. It's from this bundle of templates.

I think templates are awesome. So simple when you want to capture a story quickly. The 8x8 size of this worked out well, because the photos I have were very small, and poor quality. Madelyn went camping with her uncle, and he took a ton of photos and sent them to me. I can't tell you how pleased I was to get these pictures of her having such a great time. Even through the pictures aren't great, I was still able to capture her first horse camping trip. 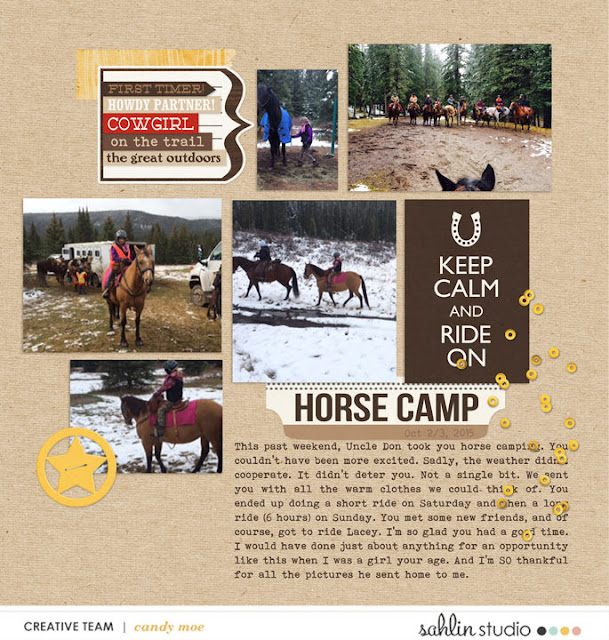 For this layout, I used Project Mouse Frontier Bundle. All the western elements tied in perfectly to her western weekend. Will she go camping again? I think so. Uncle on 'gave her' Lacy [the horse she's riding] She loves to tell everyone that she 'has a horse'. Poor horse though... She hasn't fed or groomed it since the first weekend in October.

This takes us back to summer holidays. Not just summer vacation, but our actual holiday.

We were lucky again this year to have super weather. We had a few storms blow through while we were there, but they blew threw, and didn't last days and days. We were lucky that the forest fire smoke didn't bother us too much either, considering that a large chunk of British Columbia seemed to be on fire. The kids both met friends, that were there for the same duration as us. There was lots of play this year. 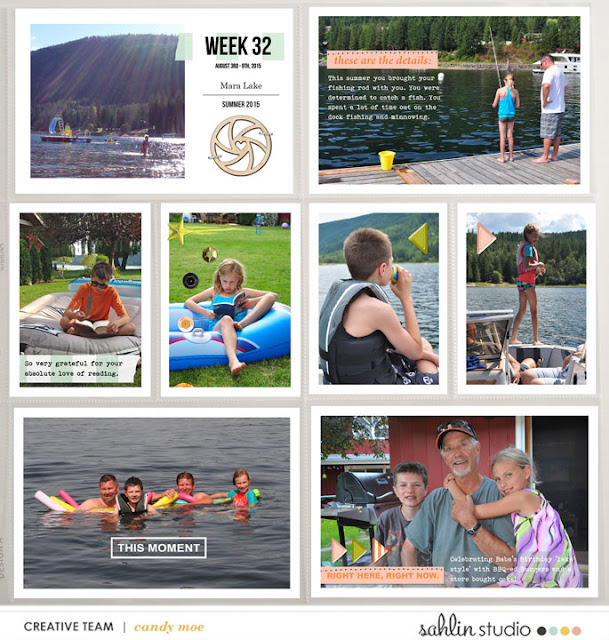 I did a double page spread, but cut the page protector down a little bit. I wanted to include more photos, but have there be a little bit of interest as well. 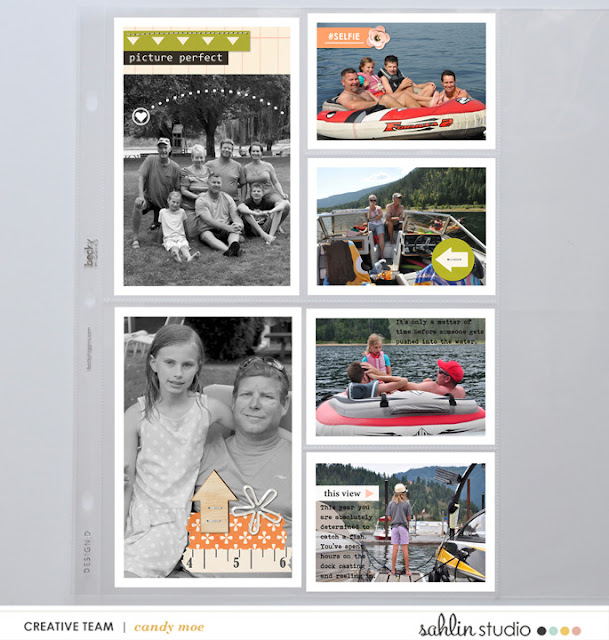 This was the backside of the cut down page protector. I did the same for both weeks of our vacation. 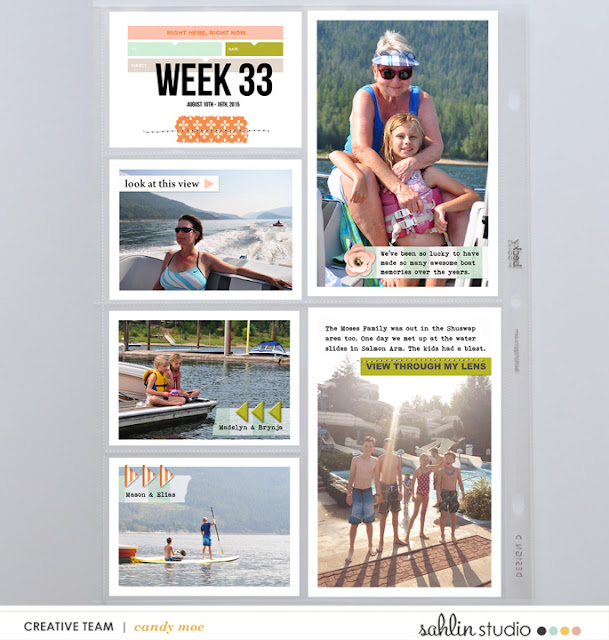 So much time spent outside. So much fun had by the kids. Madelyn fished a ton this year, and finally caught a couple of fish our last few days there. Mason was able to use a kayak and paddle board, spending lots of time doing that. 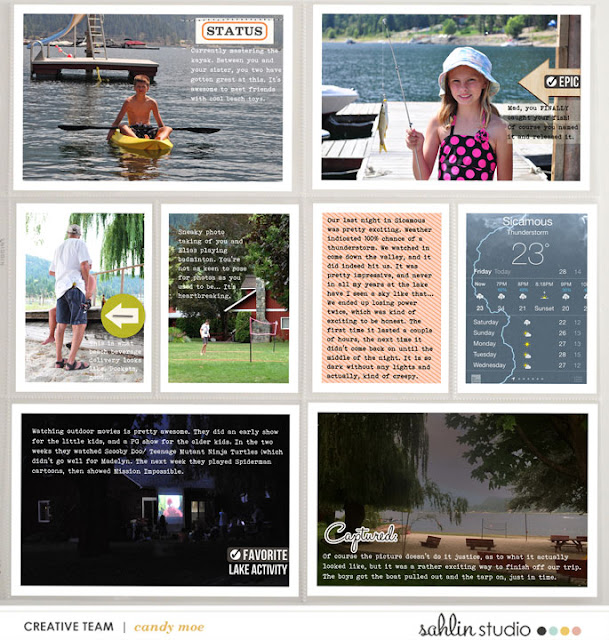 Week 34, the kids were in a summer camp at COP. So I had hardly any pictures of them this week. They both got ball caps and both had great camp experiences. Madelyn is already hoping to do the Ringette Camp again next year. 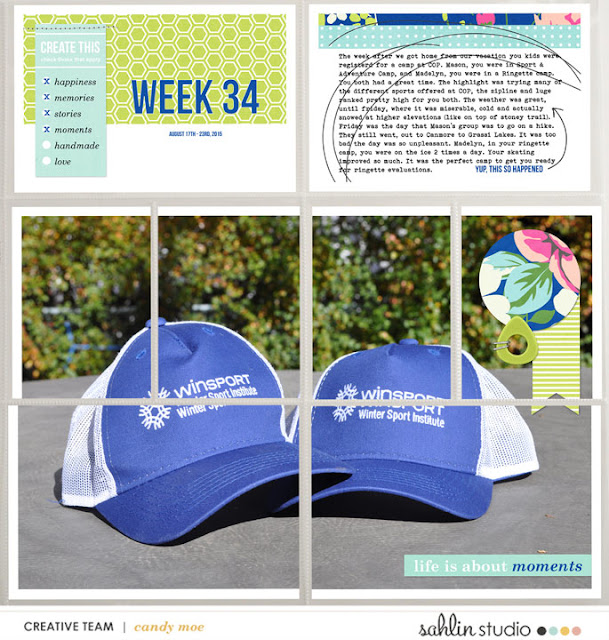