Four weeks into 2017. Things are, as always, busy.  Ringette and hockey are still going strong. Believe it or not, we're checking out Junior High School open houses for the baby of the family. Gulp... We are also filling out forms and trying to make decisions regarding High School for our first born... Double gulp... 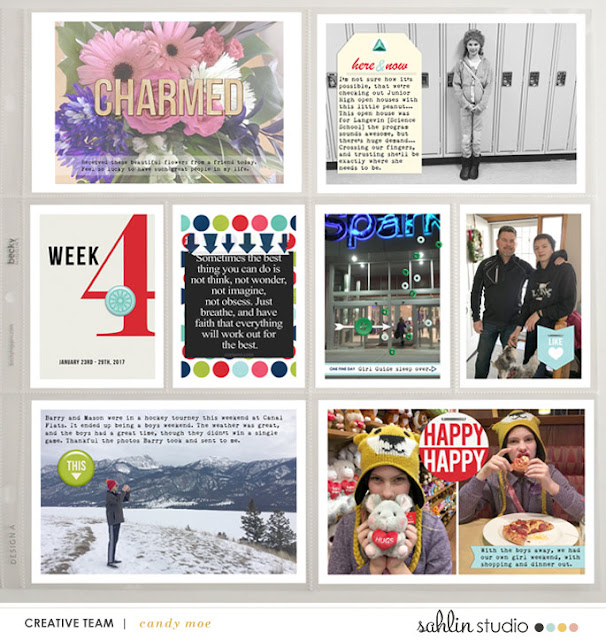 This week I got a beautiful bouquet of flowers from a friend. They were one of the most beautiful bouquets I've ever had, and they lasted forever. We checked out the Science School open house. The boys headed to Canal Flats for a hockey tourney. Madelyn got to have a sleep over at Telus Spark with her Girl Guide group. While the boys were away, we went shopping and had a dinner date out.

Still in the process of catching up to complete my 2016 Project Life album. Here is the month of August, in a two page spread. 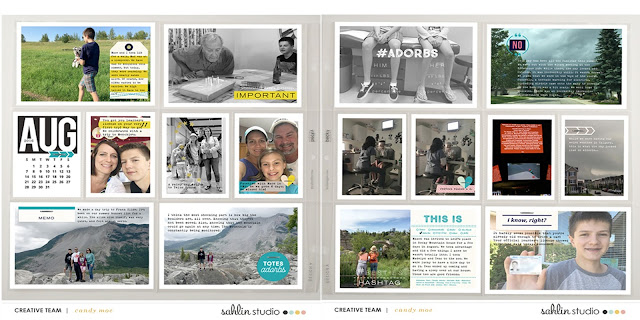 This was the rainiest summer ever. We had very few days without a sky full of clouds. We were so thrilled when we did get a sunny day, but then the mosquitos were out in full force. 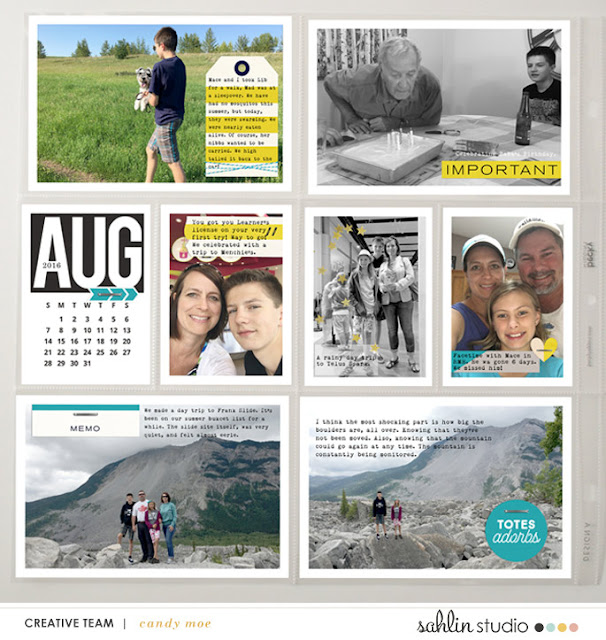 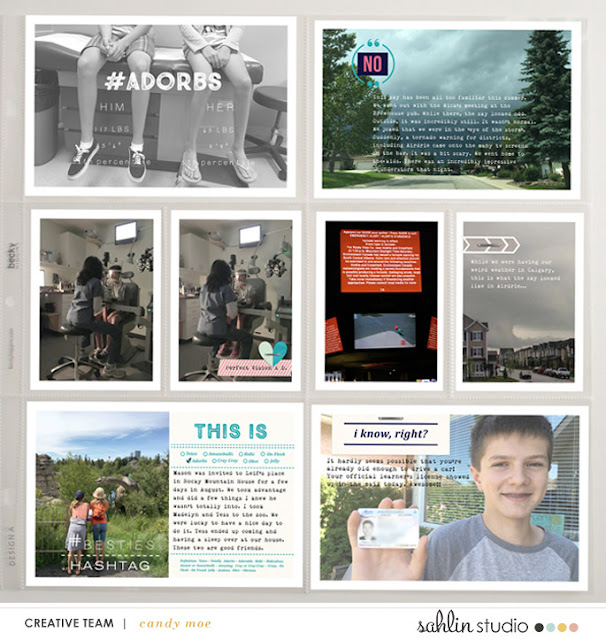 I created this layout, using Sahlin Studios February template freebie. [Free for the month of February only, so get it before it's gone!]

This is from Mason's Grade 9 West Coast Sailing Trip.

Mason was so excited to go on this trip. He went with the kids in the English program, which is who it was offered to. There was room, so he was able to go.

I have to say I was indeed nervous, about sending him on a plane/trip all by himself. However,  having heard from so many other people, how fabulous a trip it was, we knew he had to go.

He saved up some money on his own, participated in a few school fundraisers, and before we knew it the day had arrived.

We had to drop him off at the airport at 5:30 am. We were all a little bit nervous. He was patient with me as I took some pictures [only because we were well away from any acquaintances]

We got an email update most days, letting us know what had happened throughout the day, including a few photos. With so many kids, we knew we wouldn't get many photos of 'our kid', but we did manage to see his mug in a few pictures. 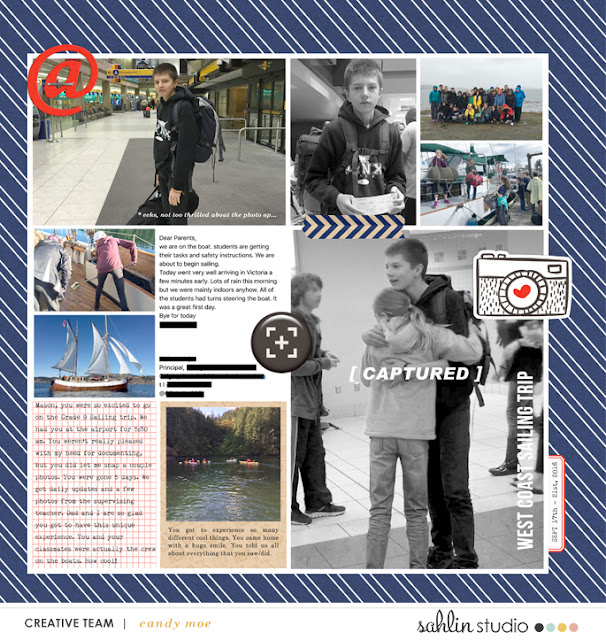 The photos that were sent home, were not great quality, but with the little boxes on the template, I was able to include some memories from the trip.

We all went to the airport to pick him up, and were all so excited to see him. Especially his sister, she practically flew into his arms. It was so sweet to watch, because he actually hugged her back, for a nanosecond, even with all this classmates around.

It took him awhile to get his equilibrium back, he felt like he was swaying quite a bit over the next few days. Mason gave the sailing trip a two thumbs up, and would definitely recommend it!

I have been struggling with picture taking recently. Very unusual for me... But for week 3, there wasn't much to pick from.

It worked out well, that week 3 ended up being on the backside of a page protector I'd cut down for week 2.

The highlight of week 3, was taking the kids out to lunch on a Friday afternoon. DQ's was the unanimous choice for my ice cream loving duo. Of course, after we'd eaten, I made them take photos with me. Madelyn is still pretty eager, but as you can see in these photos, my soon to be 15 year old, was less than amused. What made the situation even more hilarious [at least for Madelyn and I] was taking the photos in snap chat. [Heaven's no, I have no idea how to use the app] But thanks to Madelyn, we can take and save ridiculous pictures from it. And boy, we do have a fun with all the different filters. Well, Mad and I have fun any way. 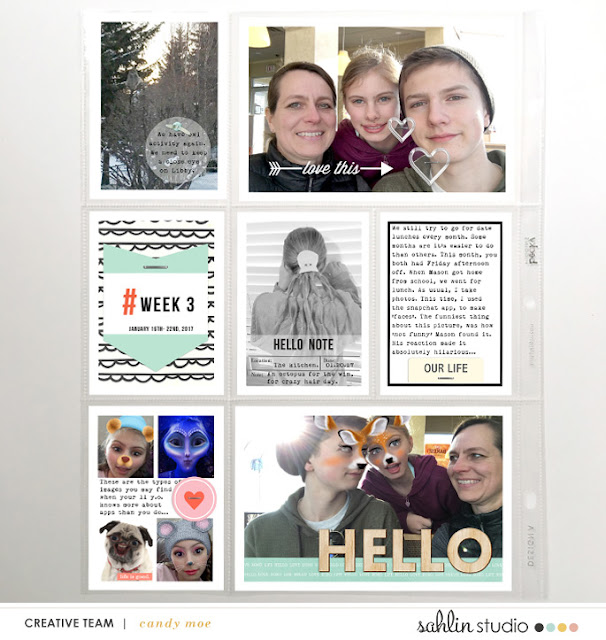 I'm pretty sure Mason thinks I'm nuts. And I'm okay with that. His reaction when he saw his face as a deer, was priceless... This photo will forever make me smile.

As you can see, Mad has mastered the filters, and takes photos when ever my phone is laying around. It certainly makes for some hilarity on the camera roll.

We have owl activity again, so we need to keep a close eye on Libby when she goes outside. We've seen the owl pictured above, and another very large one... Enjoying the late night 'who-who's'.

Crazy hair day at school happened, and I was reminded about it at 9:45 pm, the night before. Thankfully I found the perfect solution on Pinterest. Octopus hair. Easy to do, and the put together only kept me up until 10:15. Thank goodness I had felt, googley eyes and glue for my glue gun on hand.

My intention for my 2017  album is to take each week as it comes. I wouldn't say I have a set plan in place. If I want to document tidbits or stories throughout the week, I'll do that. If I want to focus more on one story, then I'll do that.

That's how week 2 came to be. This was the dreaded week of Esso Minor Hockey week, and Esso Golden ring. In 9 days, between 2 kids, we had 12 ice times. Mason had 3 practises and 3 games. Madelyn had 1 practice and 5 games. We always know that this week we can expect things to be a bit nutty. After last year, we were more prepared. We actually dodged a bullet, Mason's team didn't go as far this year, you can only lose twice, then you're out. So that freed Barry up to watch all of Madelyn's games. Last year he missed most of her games, because of hockey conflicts.

I kind of wanted the main focus of this week to be on the rinks. Where essentially, we spend our winter... 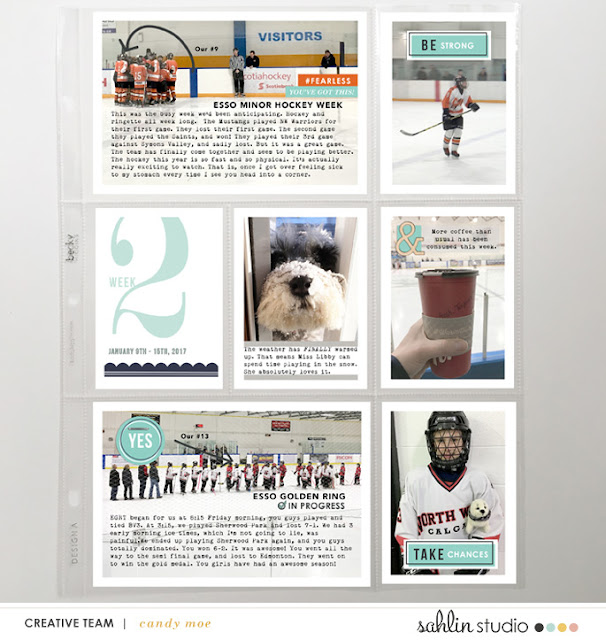 Like I mentioned, the boys lost-won-lost, so were out after 3 games. [Not all bad]

The girls tied-lost-won-won-lost. They made it to the semi final game, and were beat by the team that went on from that game, to win gold.

I complain about how busy we are, and how rare it is to have a free night on our calendar, but at the same time, these kids love playing. I'm not going to lie, the 6:45 am ringette practises, are a tough sell. But they get up and go, willingly, with little to no complaints. And in all honesty, I love watching them both play.

Both kids have improved so much over the years. Mason is so fast up and down the ice, it makes my head spin, thinking back to his first years... And Madelyn has become very comfortable and competent on the ice. She's a different player this year, battling in the corners for the ring. It's so fun to watch.

So though EMHW and EGRT are a ridiculously busy week, schedule wise, it's just a quick blip on the January calendar once it's over.

Number Journal  Cards
Like a Boss kit
Posted by Candy M at 1:22 PM No comments: