I just realized I'm a few posts behind. That seems to happen too easy.

Here is my layout for week 15: 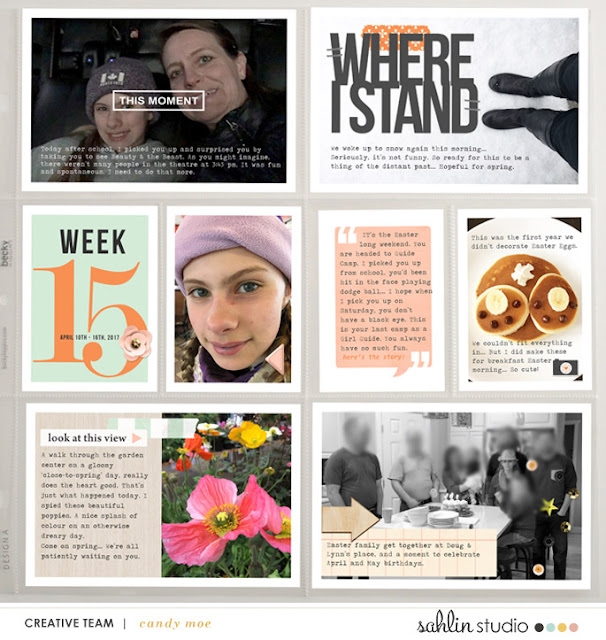 It's happened. My baby has turned 12.

My little, who is not quite so little any longer.

She's been waiting many years, for her friend sleep over birthday celebration. I, on the other hand, have been dreading it for the same amount of years...

My Mum hated me and my brother having sleep-overs. I couldn't understand it. They were SO FUN. That's what I thought when I was vying to have them and go to them. Now, I get her. I hate sleep overs...  The most obvious reason, my over-tired, cranky, unbearable the next day, kids... Hate that part. They deny it of course, but there are more often than not, epic meltdowns at some point the next day. I hate over tired cranky, crabby kids. Especially my own.

Having said that, we had a 'camp out' themed 12th birthday celebration.

She was allowed to invite 3 friends [my limit for kids sleeping over is 4; including my own] I haven't budged on the number of kids yet. The same rules apply to Mason and his friends. It was a tough decision, but she managed to narrow it down to 3 friends.

Thought I hate sleep overs, I do love planning a party.

I'm not going to lie, Pinterest does make me feel inadequate at times. I mean there are some extremely crazy talented party planning mums.  Some of them go totally over the top.

But it isn't for me. I do like to pick up my favourite tidbits, and put my own spin on things.

This year, I was feeling a substantial amount of guilt, because last year, she ended up not having an birthday party. I don't need to get into it, but having or not having a party, were on Madelyn. Having said that,  I am still plagued with mum guilt. [Last year she was going through a Wizard of Oz phase, and that would have been much fun to plan also...] Here is last years invite: 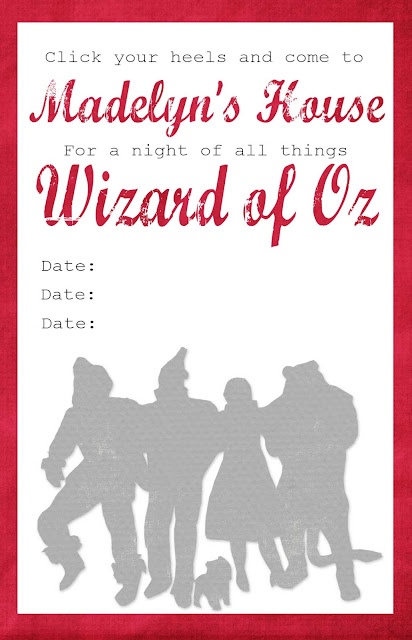 It never got finished, or sent out. Like I mentioned, in the end, the onus was on her, and she didn't follow through. But the guilt... Ay-yi-yi... When your kids says, "Yeah, I never even got a birthday party this year..." To friends, aunts and uncles, grandparents. To anyone that would listen actually. Well, it does have the desired effect.

It's obviously going to be long lasting. That guilt.  I digress.

At least I don't have the guilt for this years birthday celebration. This one, thank goodness, was successfully planned and executed.

Here is this years birthday invite: 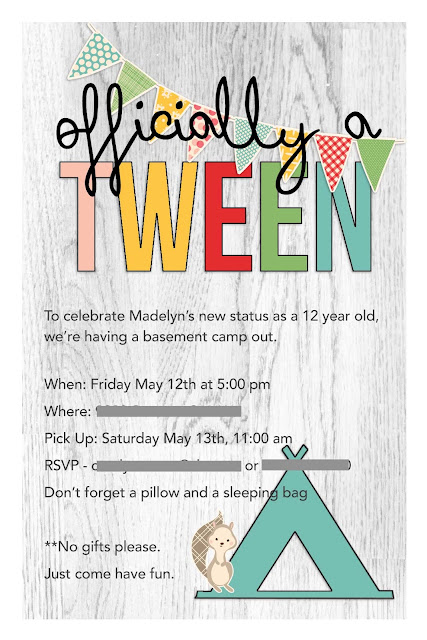 This was her first sleep over with more than one friend. So we had the idea of putting the tent up in the basement for the girls to sleep in.

She thought it was an AWESOME IDEA, and so operation 'birthday campout' was in effect.

I helped set the stage of course: 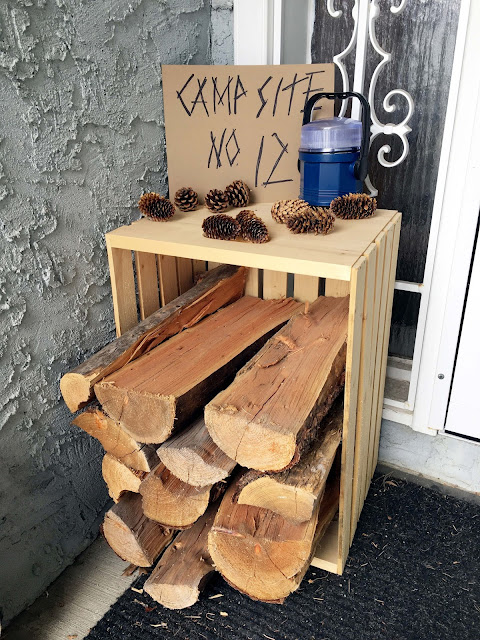 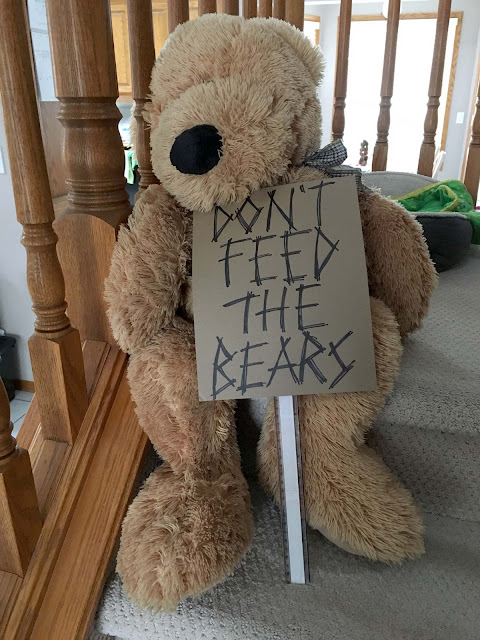 The dinner menu was BBQ-ed dogs and veggies and dip. I was surprised at how much some of these kids could eat! I'm used to the teensy amount of food Madelyn eats. Grilled dogs were perfect camp out themed meal. 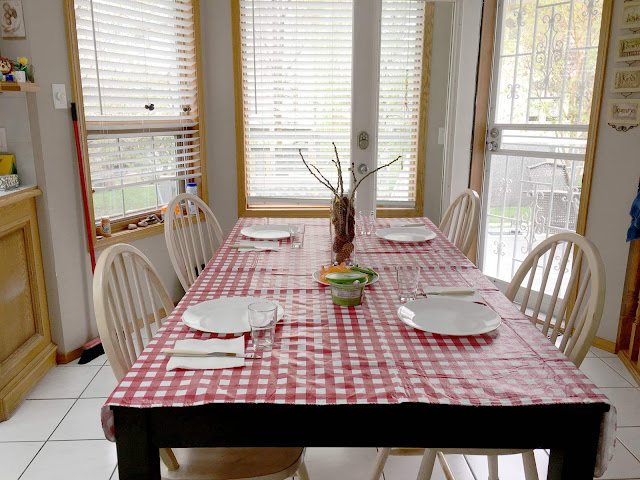 I picked up a red and white checked table cloth from the dollar store [I'll be able to reuse it for this years Canada Day celebrations] From the neighbourhood, I picked up twigs and pinecones to decorate a vase on the table. Easy-peasy. 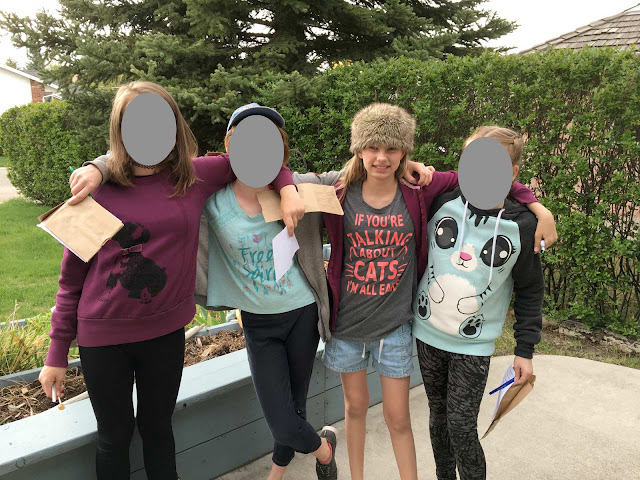 After dinner, the girls did an outdoor adventure hut. They went around the block as group, looking for what was on their lists. 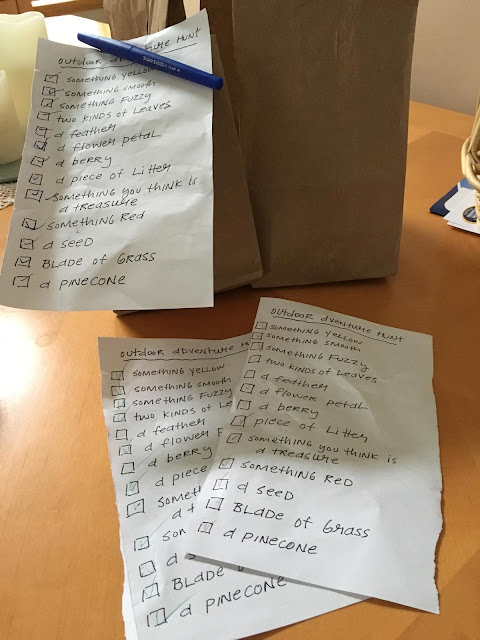 Alyssa did find everything on the list [the feather being the toughest item to find] There were no prizes, they just did this for fun. 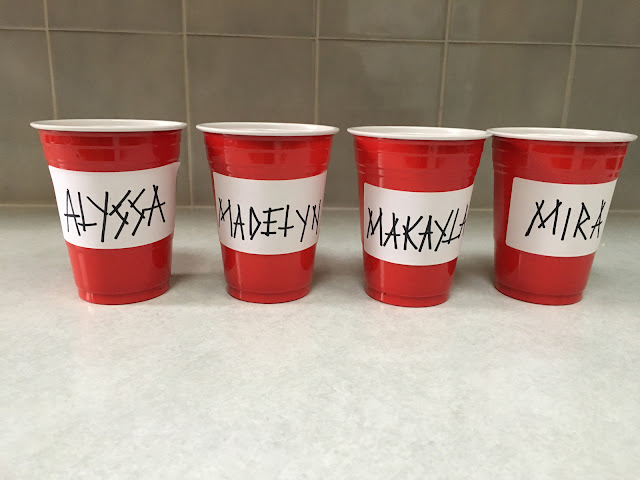 The red solo cup... With names, as to not confuse which cup belongs to who... 3 girls with  names that begin with the letter M... 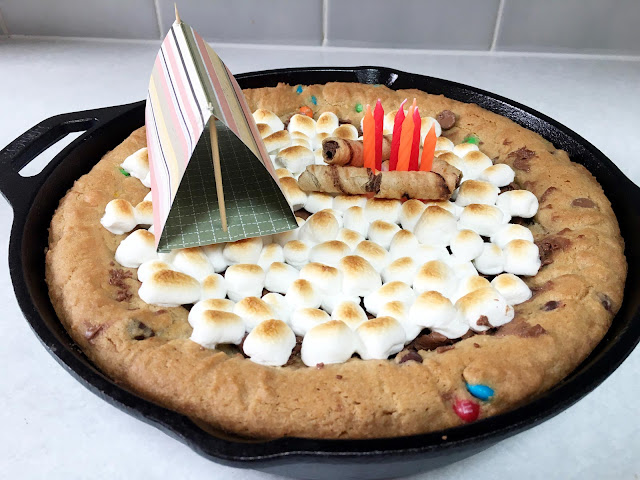 Madelyn requested a cookie panookie for her birthday dessert. I turned it into a S'more Panookie. I melted a chocolate chips on top of the cookie, and broiled a layer of marshmallows to create the S'more look. Made a tent out of paper and campfire of candles. 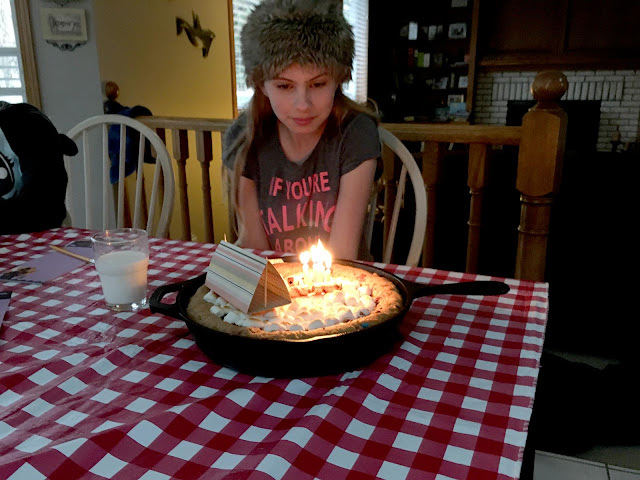 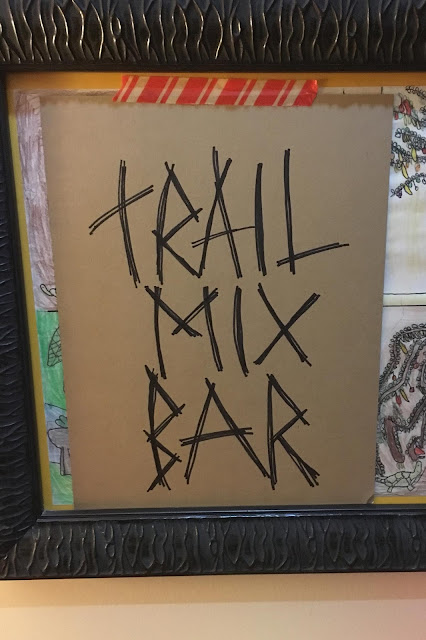 The highlight was undoubtably, the trail mix bar... 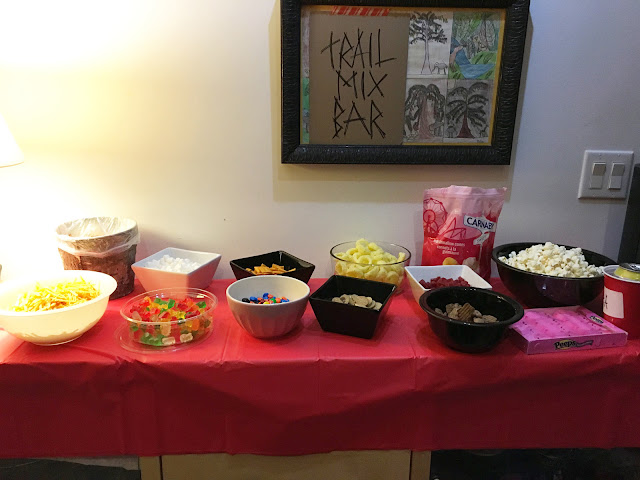 There was no rhyme nor reason to this, just a bunch of treats. They could choose from pretzels, hickory sticks, miniature marshmallows, gummy bears, M&M's, cheese its, pretzel chips, onion rings, nibs, cheddar popcorn and s'more teddy grahams, marshmallow cones. It was quite a combination.

I crossed my fingers that no one would eat so much, that they'd throw up.

In the basement. In our tent.

And thankfully, no one did. 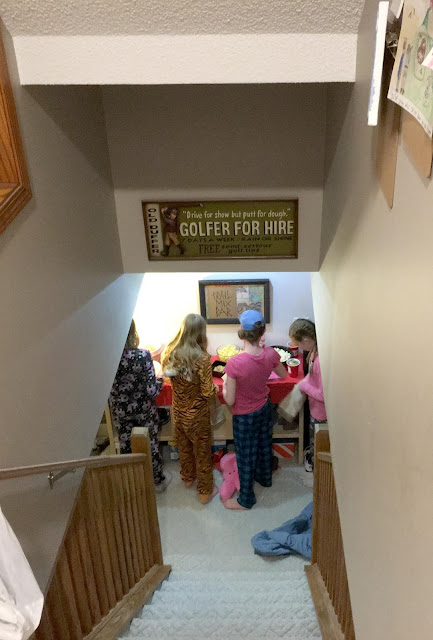 The girls had a great time. They laughed and giggled and squealed. Madelyn made a point of coming upstairs to thank me and telling me "This is the best party I've ever had!"

So, Mum guilt for this year, isn't happening.

And to be totally honest, they kept themselves entertained better than I thought they would. They hung out in the tent, rather than watching movies. They played a little bit of video games. All of them were gone by 11:00 the next morning. There was however, the anticipated meltdown the next night, at 10:45 pm. Those are always expected though, so I wasn't at all surprised.

As you probably know by now, Sahlin Studio offers a template freebie each month. This is June's template. Click here to go to template download. 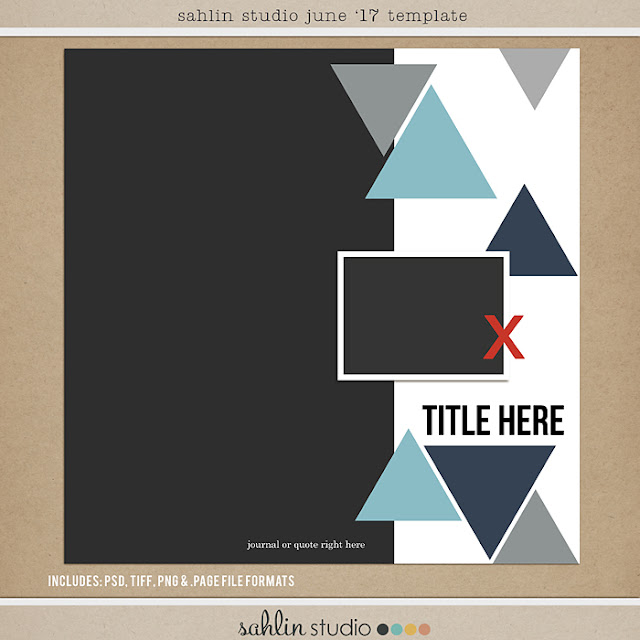 I'm always excited to see the newest template freebie.  I love working with templates. All I have to do is locate a photograph, and decide which kit I want to use.

Looking through my photos, I found the photo I knew I wanted to document, but it wasn't in the right orientation. Easy-peasy... I turned the whole template around 90 degrees so it would better suit my needs.

Here is my take on this months template: 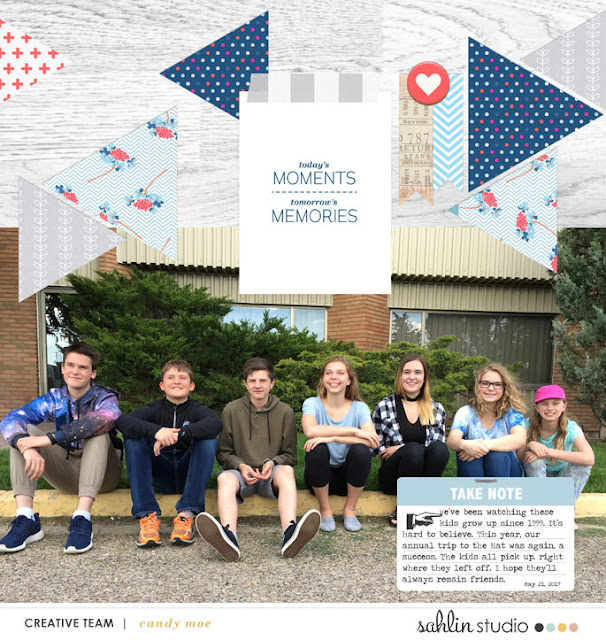 We had a great visit with friends. We look forward to it every year. The kids always seem to pick up where they left off, and for that we're all thankful. I think this might have been our best get together yet. I don't know how many more years, we'll be able to round these kids up and spend the weekend together, but we'll doing it as long as they're all still willing.

For Real - Paper
For Real - Journal Cards
For Real - Elements
Posted by Candy M at 1:41 PM No comments: