The last two weeks have been unseasonably warm. We have had the odd rain day thrown in there, but the temperatures have been in the high 20's. I have to say, we're not used to those kinds of temperatures. We may have a week or two, during the summer, usually during the stampede, that the temperatures soar, but never this early. And I promise not to complain, because I truly thought we'd have snow in our yard For. Ev. Er.

This is truly my favourite time of the year. The days are getting longer and warmer. The end of school is near... The sunshine and good weather just make people happy...

Here is week 15 of my project life album. 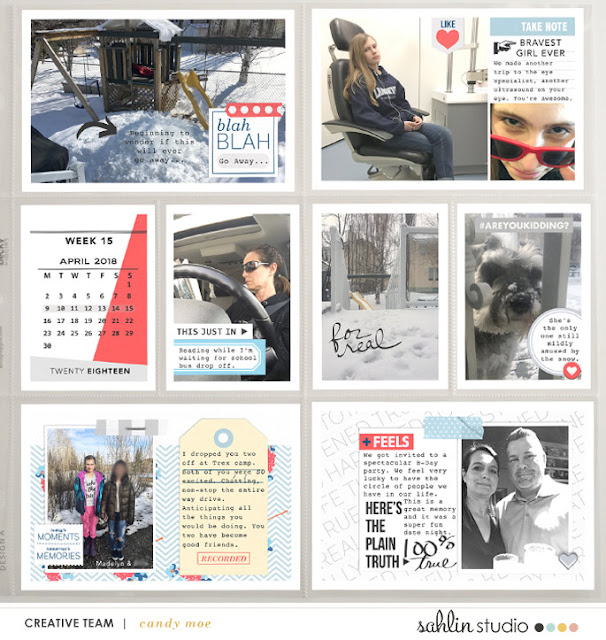 A short week with Monday being a holiday, and an unexpected trip to the Flames Game. The short weeks always seem to drag on the longest for some reason.

I also wanted to include a blurb about the terrible bus accident. I plan to do a small layout to include with this week, pertaining to the accident. 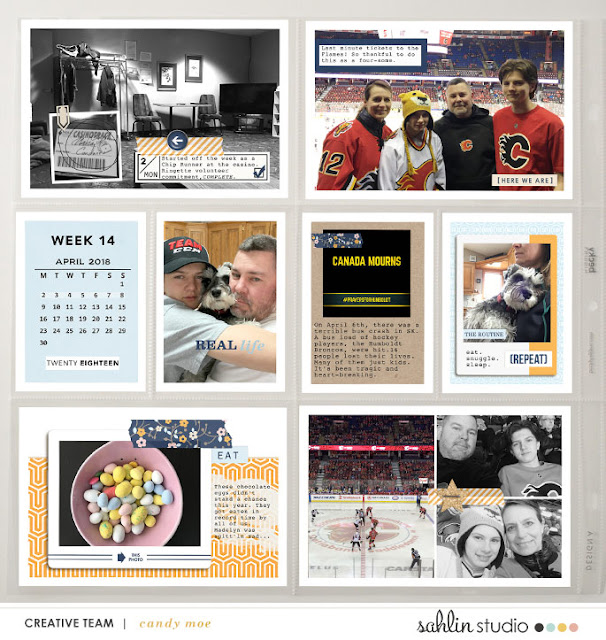 Oh my goodness... It's nearly the may long weekend.

The grass is green. The leaves are out. There are even some mayday trees and crab apple trees blooming. The last two days, the temperature has hit 28-30 degrees celsius.

We went from 7 months of winter, to blazing hot. And already it's hard to look back at these winter pictures and remember how miserable and HOW LONG our winter was. 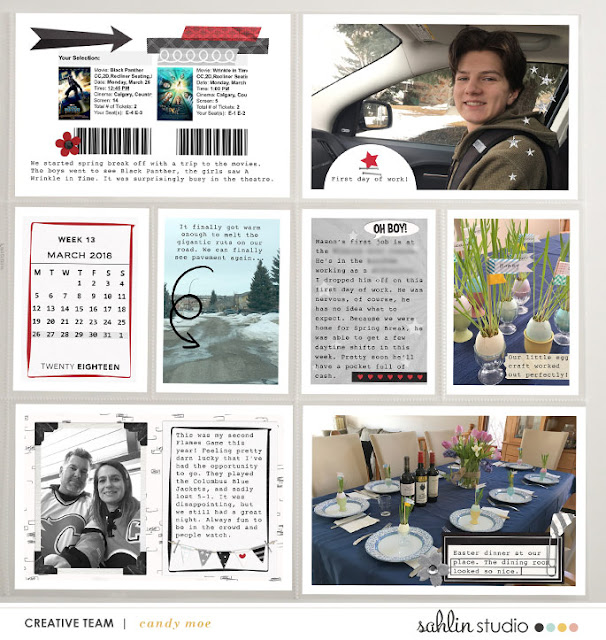 It's that time again!

Click here for the May template freebie from Sahlin Studio. 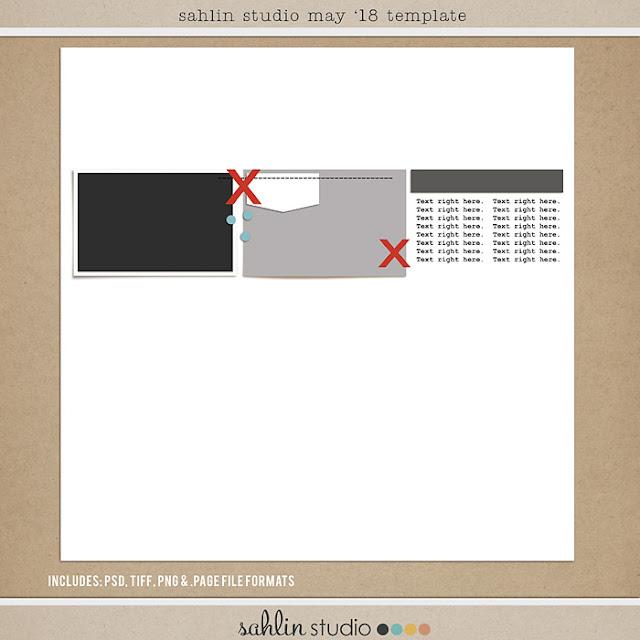 I absolutey love the simplicity of it.

I looked through some photos, wondering what story I should capture, found this picture I'd taken through the book shelves at the library last summer.

Here is the layout I created using the template: 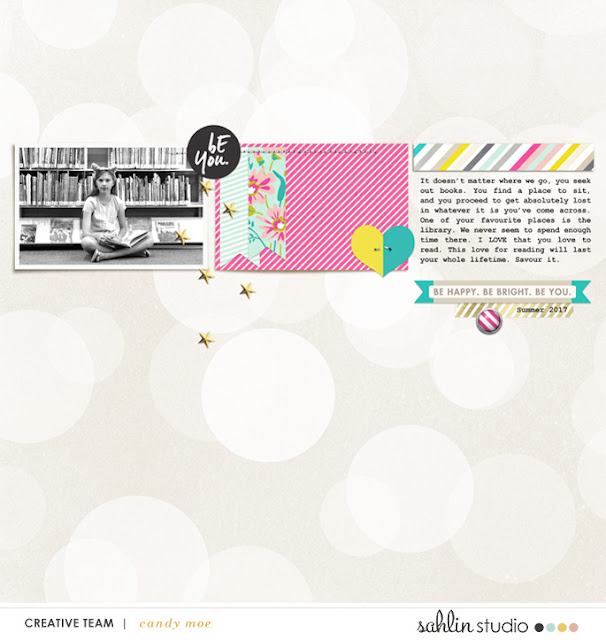 One of my greatest accomplishments as a parent, is raising avid readers. I like to think that I had a helping hand in this. That they have seen my love of reading, and have naturally loved to read as well...

As I child, I was definitely an avid reader. I went through books at a pretty quick rate. I could get lost in a book any where, any time. I'm not one of those people who can read a few chapters before bed, to put themselves to sleep. No, I have to force myself to finish a chapter, and turn out the light. And if it's a really good story, that's a lot easier said than done.  I have been known to read into the wee hours, though I don't do that as much these days. Sleep ranks pretty high up there these days.

This girl though... Wow. She's a reader. If I thought I was an avid reader, I'm honestly not sure what I'd call her. She reads way faster than I can, often averaging a book a day. She absolutely gets lost in a story. She doesn't hear you talking to her. She doesn't hear you ask her a question. Or telling her it's time to go. Or calling her for supper. She sneakily turns her reading lamp back on at night, after she's been told lights out. She is constantly threatened of light bulb removal. But still, she reads. I have often woke up in the morning, to find her light back/still on, and her finished book beside her.

No matter where we go, she finds the books. She's drawn to them. She will sit down anywhere and read. And she does.

And for that I'm grateful. Because the worst thing about this story, is she's tired in the morning, because she loves to read.

First of all, I love the bright colours of this page.

Back in week 12, we were still knee deep in snow. After seeing nothing but white snow covered landscape, a little bit of colour is nice...

I didn't have a lot of photos for this week. In fact, my first photo was on the Thursday night, of all 4 of us at the mall. We came out and it was of course, snowing... 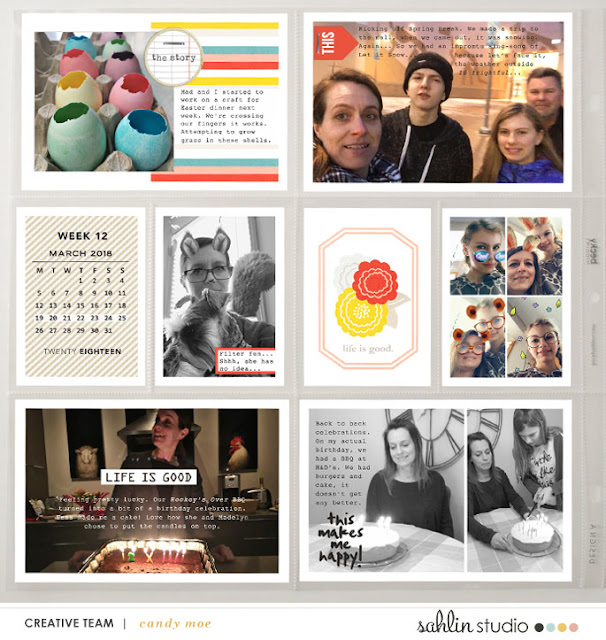 I've been thinking about this post for quite a while.

Right now, I feel moved to add my two cents.

There is a building momentum right now, that people are addicted to their smart phones.

My thoughts on that. Duh. Couldn't see that one coming...

I went to my kids swim lessons, years ago, and watched parents sit with their nose in a phone. Paying no attention to their kids. I assume their thinking must have been that the swim instructor has 'got this'.

I've watched countless kids look over at their parents, eager to make eye contact, to show them 'I did it!' and their parents had absolutely no idea. No clue at all. I wonder what those conversations sounded like on the way home?

That makes me feel sad. Very sad. It also makes me mad.

Seeing the disappointment on the faces of kids, once they realized their parents were NOT paying attention to them, or what they were doing, is gut-wrenching.

We are our kids cheerleaders. Us. The parents. I'm not saying every single thing they do, deserves a party thrown. But when your kid is learning to swim, and looks over to you watching for your reaction to what they just did or accomplished,  a smile and a 'thumbs up' means the world to them. I'm using swimming as an example, but I mean anything. When they skate by, and glance up at you, you should see that. When they run by during a track meet, pretending NOT to look for you in the crowd, but they're looking for you in the crowd,  you should see that. When they get their first goal, you need to say "I know! I saw it".

I spend a great many hours, sitting in arenas from September through March. There are a lot of kids that would benefit from a thumbs up, a way to go, a smile from their parents. There are a lot parents who miss seeing special moments because they are simply not present. **Spoiler alert, minor sports don't have replays on the jumbotron. When you miss your kids first goal, you can't re-watch it.

I was late to the game with a 'smart phone'. I never texted. When people told me that was how they communicated with their children, I was kind of shocked. "You mustn't have teenagers" people said to me. Six years ago, I didn't have teenagers. I had a flip phone, that I used for phoning people. It rarely got used, and if I forgot it at home, it wasn't a big deal.

I got my first iPhone the Christmas of 2011. All I wanted was interested in was having a better camera feature and to subscribing to Instagram.

Firstly, I'm no different than anyone else.

I'm absolutely addicted to my iPhone. That became perfectly clear the first time I got to my destination and realized I'd forgotten my phone at home.  I was sick to my my stomach until I got it in my hand again, knowing it was at home without me... Or rather, me without it...

I depend on my phone like every one else does.  I haven't memorized a phone number in years. All the information of my life is stored in my phone. I pick it up and mindlessly scroll through apps and websites.

And nearly every child I know, has a smart phone.

It's not like we're not in this as well. My kids each have a smart phone. It's easier to do family share plans, when you all have the same devices. Apple isn't dumb... Like that wasn't part of their plan all along.

Each of them got a phone once they started Grade 7. To go from elementary school, within the community and moments away from home, to junior high that was a considerable bus ride away, was kind of scary for this Mumma in particular. It was more me, that wanted to have access them them, should I need to.

We have placed pretty strict restrictions on their phones, some them being as follows:

-Neither of them have data on their phones, so can only access apps/websites when they have wifi.
-Phones do NOT go into their bedrooms
-Phones all have a 'place' over night.
-No apps are downloaded w/o permission.
-We have the right to go through messages and check things over. At any time.
-No one is allowed phones at the kitchen table.

Having these rules in place, makes us feel better, but by no means removes the dangers of having a smart phone.

It's actually like handing your kids a loaded weapon. If that doesn't scare you, it should.

There is so much controversy right now over social media apps.

I'm heartbroken about young kids these days, who feel inadequate, or can't stop comparing themselves to others. That see things posted on sites such as IG as real, when it's just simply not.

The ones who are cyber bullied, and can't get away from it. Ever. 24/7. I mean put yourself in someones shoes, someone who really feels there's no way out. So terrifying.

I feel scared for kids who get exploited, kids who do the exploiting. Kids who think an image 'disappears', not thinking about the good old 'screen shot' that will last forever.

Kids that film themselves doing dumb things, not thinking about their future or the consequences associated with them.

All I really wanted an iPhone for, was to become part of the Instagram community. I feel a bit bad that IG is getting thrown under the bus right now. I'm a grown woman. I don't compare myself to other filtered feeds. I also know my house will NEVER look like a show home.

There is a big push to delete all social media apps. I don't really know where I stand with this. Some social media sites appear to be unhealthy, I get that. I also know that my teenager communicates with his friends via these social media sites. It is monitored, and he's got a good head on his shoulders. When I was a teenager, I talked on the phone All. The. Time. So much so, that my Dad installed my own phone line. [It's safe to say people were tired of getting  a busy signal] Kids don't 'talk' on the phone these days. But they text like the dickens...

I can't imagine deleting my IG account. I love that I've connect with like minded people. I love that I have the photos I do on it. The memories. My kids have changed so much over the past 6 years, and I have captured all of it. 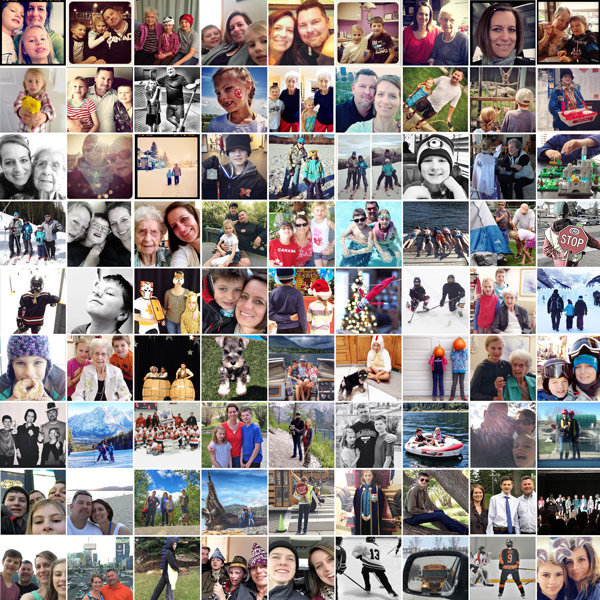 My hope is this:

Make sure your kids know they're important. Make sure they know you're a total supporter of theirs. If they think you're not, they'll find that support elsewhere. Likely they'll find it online. That is a very dangerous proposition.

Teach your kids that you value them more, than your phone. That what they're doing, is more important than what you hold in the palm of your hand.

Watch them at [insert your childs 'thing' here]

Put your phone down.

The following product was used: