Here is my layout for Week 12: 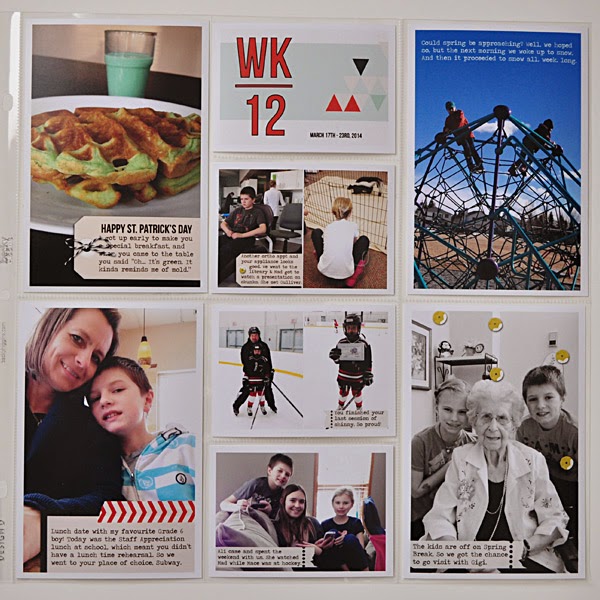 These are a few of things that happened this week:

-We celebrated St. Patrick's Day, I got up early and made the kids green waffles and green milk. Mad told me it "grossed her out..." Sometimes you try to be fun and create a surprise, and likely a bowl of cereal would have sufficed.

- Mason had an ortho appointment, and his appliance is on track. Madelyn got to see a presentation on Skunks, called "Why Skunks Make Good Neighbours" and even got to meet a skunk named Gulliver.

- We saw grass on the ground, at the park.

- Mad finished her hockey. Alecia came and spent the weekend with us.

- We went to visit Gigi.

24 Hours Was All it Took

We looked forward to Easter last week. The kids got 4 days off of school. I'm always thrilled, when there are extra days off school.

Mason took one look at me, and one look out the window, and suggested we wait until the weather was a bit more willing to cooperate...

You see. It snowed.
Again.
A lot.
Again.
But this time, it was okay, because we only had the white stuff on the ground for 24 hours. It was a mixture of rain and snow for quite awhile, it wasn't really accumulating. Perhaps a bit on the grass, but the roads were fine.

We made a trip to Home Depot, Barry tells me that's his happy place, but I'm only good for about 20 minutes...[Thankfully we had a Tim Horton's run to look forward to after I endured more time than I wanted to at Home Depot] By the time we got home, it was snowing. Like. Crazy.

Little girl, was in her glory. She loves the snow. [Though I promise when I say, she's actually physically said, OUT LOUD, "Enough already"] It was the kind of snow that was the perfect consistency for snowmen. It was quiet and serene. It wasn't too terribly cold. So she put on her boots, got a hat and mitts, and created her masterpiece: 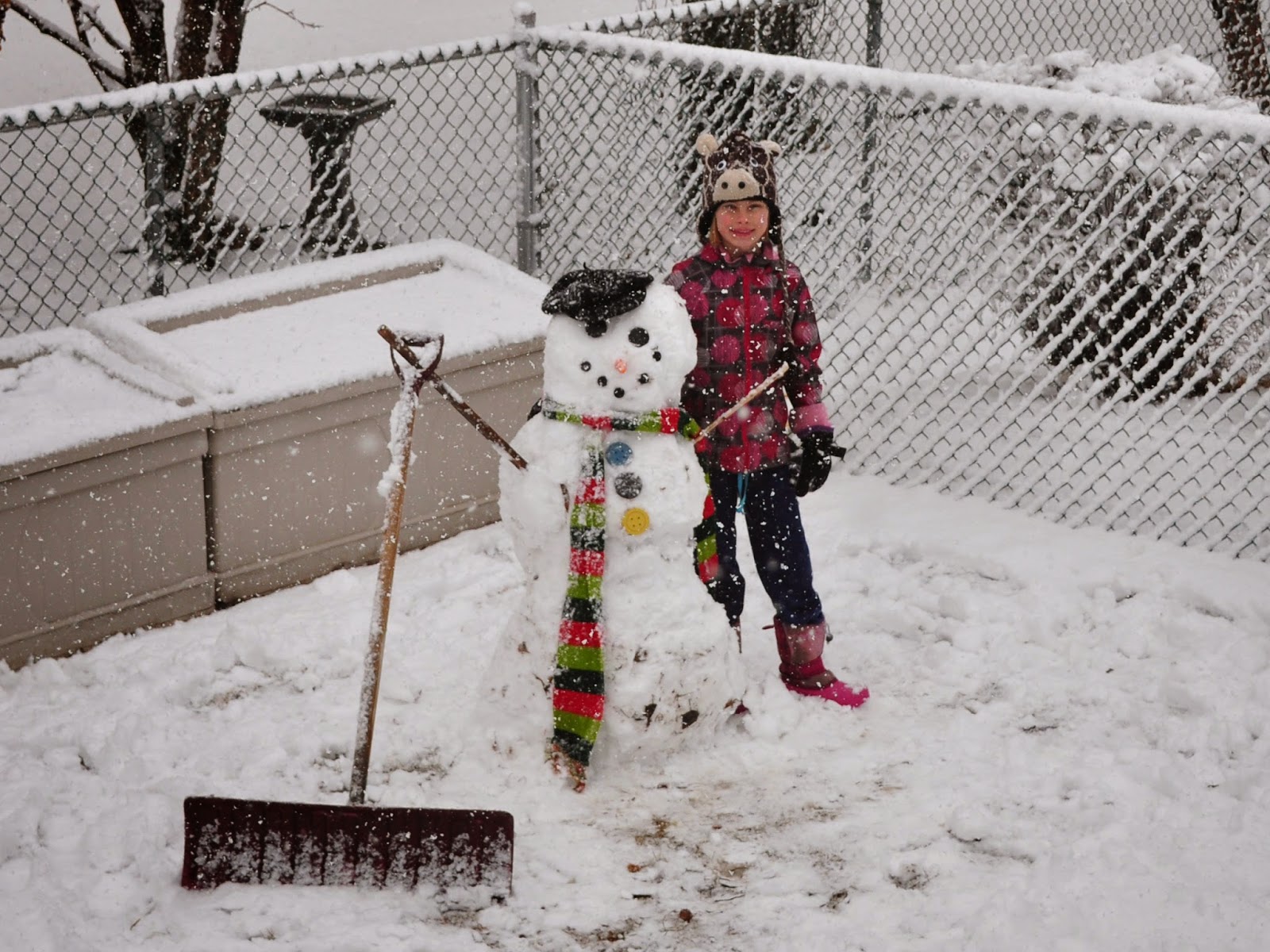 The next morning, was bright and sunny. The snow began to melt almost immediately. You could hear it running down the house, in the eaves, down the gutter. You could hear it dripping from all over. That's such a joyful sound... Birds chirping, snow melting... One of my favourites for sure.


By dinner time, less than 24 hours after this wonderful creation was made, this was all that was left of it. 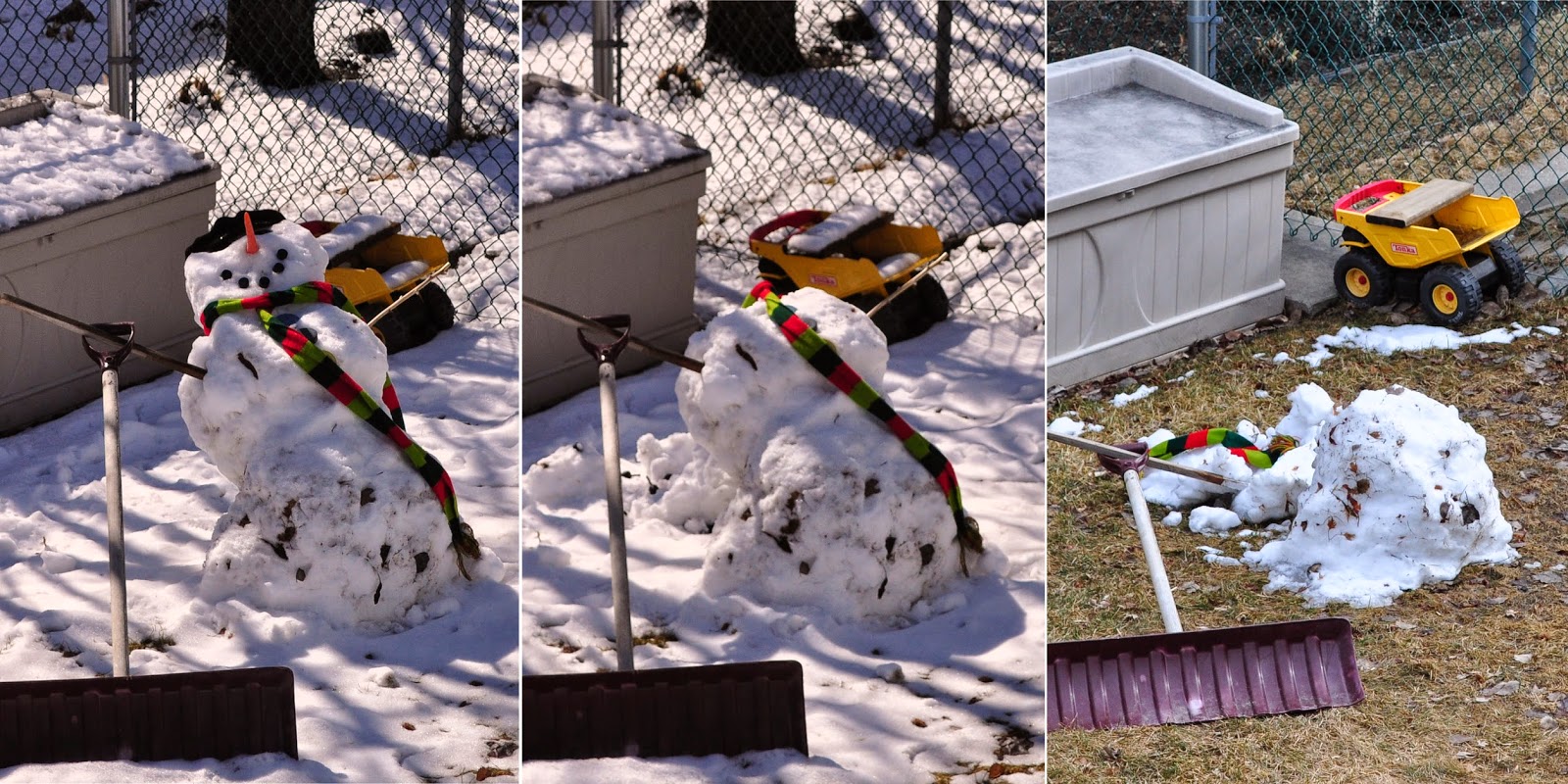 First off, there was that precarious tilt backwards... Surely he was going to fall over. Nope. Just his head fell off... And then he was gone. Just like that.

We're now well into April. So ready to be done with the snow. Want to see green grass, and lovely coloured blooms on trees. Ready to see flowers begin to emerge from gardens. We get so ripped off when it comes to spring.

Keeping our fingers crossed that this is the last snowman of spring.

Here is week 11, from my project life album. 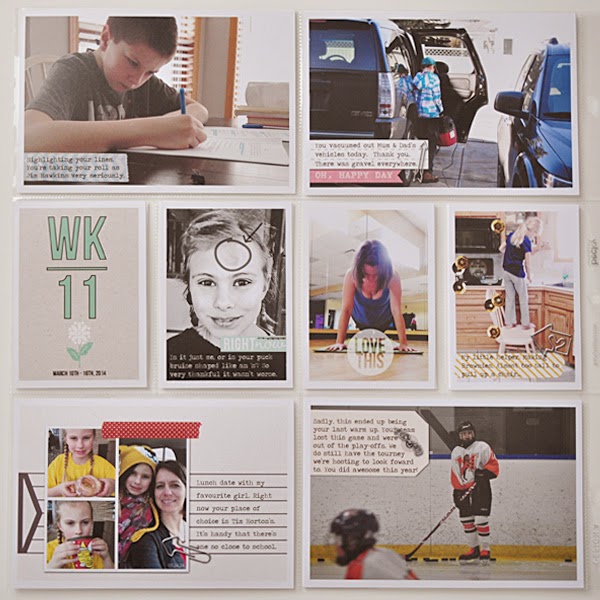 This week included a certain little boy, highlighting his lines for his, fairly substantial role as Jim Hawkins, in the division II performance of Treasure Island. Daddy also put him to work vacuuming gravel out of cars. Madelyn's hockey puck bruise from the week before, looks a lot like an 'S'. A quick shot of me at Yoga. Madelyn helping me make brownies, and realizing she's nearly too big to stand up on a chair. Lunch date with my girl. And Mason's last hockey game warm up of the season.

Here is week 10 of my project life book. I still love this project. Just as passionately as I did 2 years ago when I first started. I'm loving the single page format this year. Its short and sweet, and allows me to document stories from the week. 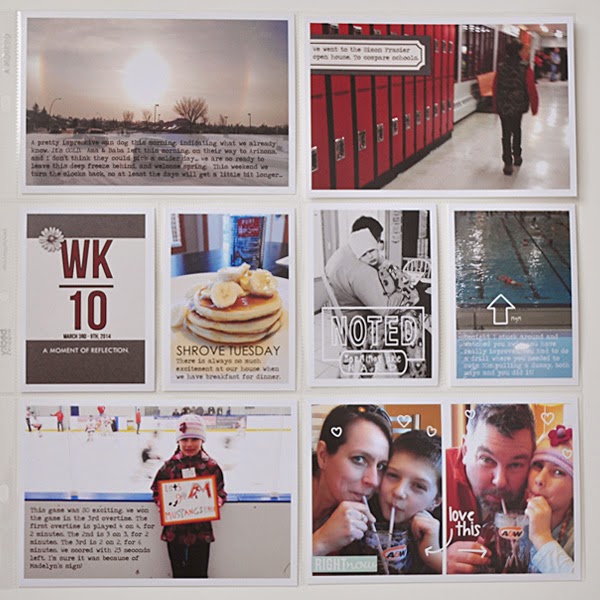 This week was COLD. Of course, it was also the same week that my M&D left for their holiday. They were heading to warmer temps. Sadly, we were not. We celebrated Shrove Tuesday with pancakes for dinner of course. Mace checked out his intended Junior High School. It's a bit surreal for his Mum and Dad... I captured a picture of Madelyn at Junior Life Saving, she had to swim 50m pulling a life size dummy behind her. Her swimming has really improved. Madelyn made a special sign for Mason's hockey game. And guess what... They won! It was the most exciting game, that went into overtime! We celebrated by heading to A&W for a bite to eat afterwards. 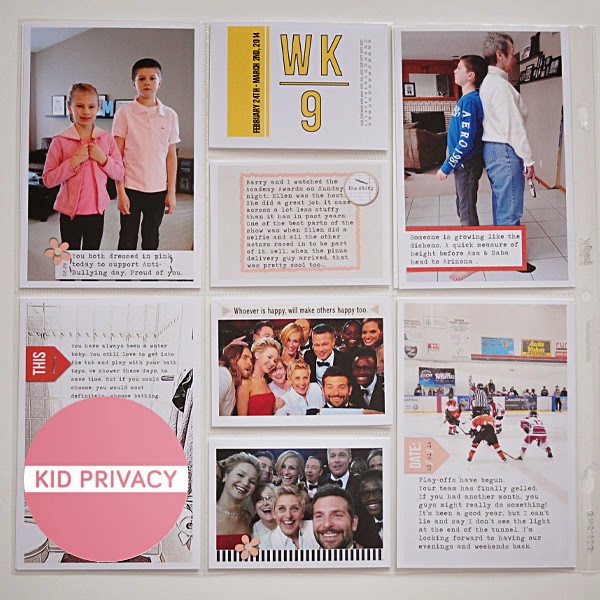 Week 9 started out with anti-bully day at school. The kids were encouraged to wear pink. Mason ended up wearing my pink Lacoste golf shirt, and then at the end of the day, asked if he could keep it... At least he has good taste... A quick visit and measuring against Ama, before they head off on their holiday. Miss Madelyn in the tub, I covered the picture with a privacy label, compliments of Cathy Zielski. You can find her free labels here. Barry and I watched the Oscars, and the 'selfie' picture, was definitely a sign of the times. Loved it. We are in play off mode now... If you lose 2 games, you're out. You have lost one game so far, and now you're team has come together... Finally.