So far, I haven't scrapped into the wee hours, as I'd expected to.

I haven't quite caught up on projects I wanted to catch up on...

Our computer is in the same room as our big TV. And it would seem, that this is the summer that Mason is on a mission watch EVERY movie series possible. So far he's watched in there entirety:
[I'm sure there are more movies than this, these are just the ones I know for sure he's watched]

It seems that the louder the movie is, the better the viewing experience. So, while he's watching movies until the wee hours, I go somewhere else, where it's quieter. Also, I'm  pretty big talker, but these days, I don't seem to be a 'up until the wee hours' kind a girl...

Also, I've been to see two movies in the theatre this summer! TWO TIMES! What?! Unheard of. Granted they've both been movies the boys wanted to see but they were above a G or Disney rating...

We saw Guardians of the Galaxy Volume 2. It was okay. That's my rating. Okay. Let's face it, Chris Pratt is pretty easy on the eyes. I love Groot of course, he kind of steals the show. I constantly listened to Rocket, to try and hear Bradley Cooper... I had tried to encourage Madelyn to watch the first movie, so she could join us for the second, but she wouldn't budge. As it turned out,  I was glad Madelyn chose not to join us, it did get a little bit dark. [Remember, she likes Disney movies...]
The movie soundtrack was pretty good. Especially the opening scenes, with Groot dancing around to Mr. Blue Sky [ELO] I challenge you to listen to that song without dancing... We've been listening to that soundtrack here, pretty much on repeat. It's Mason's new favourite. Which is pretty funny, because the majority of the songs on the soundtrack are from the 70's. Literally.

We also saw Spiderman Homecoming. This was a movie I could get on board with. I really liked it.
I have seen all the spiderman movies over the years. I watched Toby Maguire get bitten by a spider. I loved Kirsten Dunst at M.J. I enjoyed watching Andrew Garfield as Peter Parker, and Emma Stone as Gwen Stacy. Now, yet another version. This time, I loved Tom Holland as Peter Parker. He actually looked like a high school student. When we were driving home, I said the only thing I thought about the movie, was Peter seemed like a bit of a scaredy cat.. And Mason said "Mum...  He was a kid my age, don't you think I'd be scared?" Well played Mace, well played.

Very exciting that we're in July, and I've been to the theatre two times already. I'd still like to see Wonder Woman. I need to make the boys come see that with me.

Movies aside, here is week 18 of my project life album. 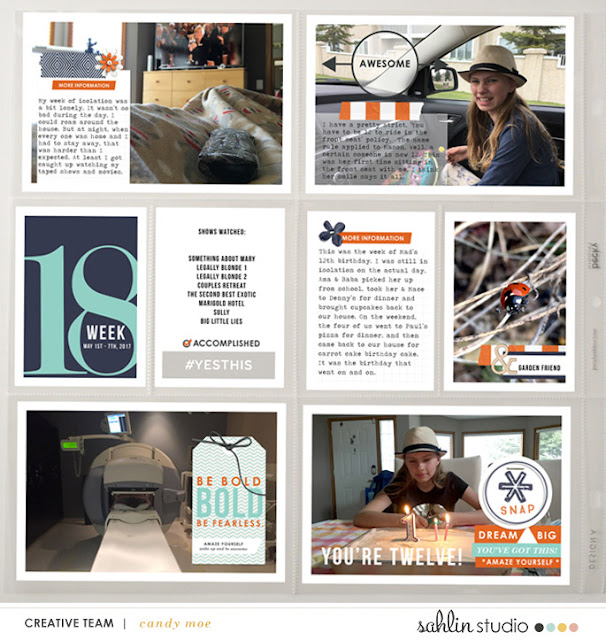 It should come as no surprised that I like multi picture layouts. I mention it quite a lot. I mean let's face it, Project Life is basically multi photo pages...

The recently released Clean Lined Pocket Templates, Vol 2, has my heart soaring.  Sometimes I think too many pictures gets things a little bit cluttered. Multi picture templates totally gives me permission to use many pictures.

This release came at exactly the right time too, we had just returned from our summer get away. I had just the thing I wanted to capture. 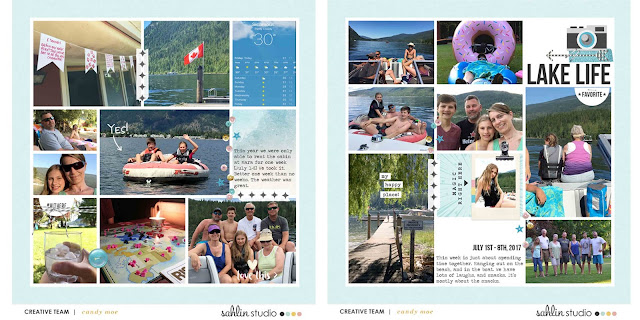 As usual, I like to tinker to make things my own. The templates [and there are 4 to choose from] are 12x12 size.

I actually shrunk them down even a bit smaller than that, because I put them onto an 8x8 background. If I have a bit of a background, then I know I'm not going to lose any of my photos due to bleeding or cut-offs. 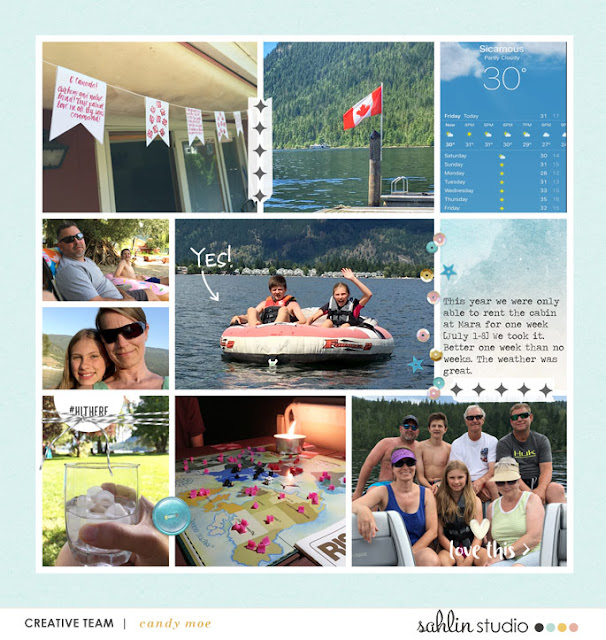 This is template No.2 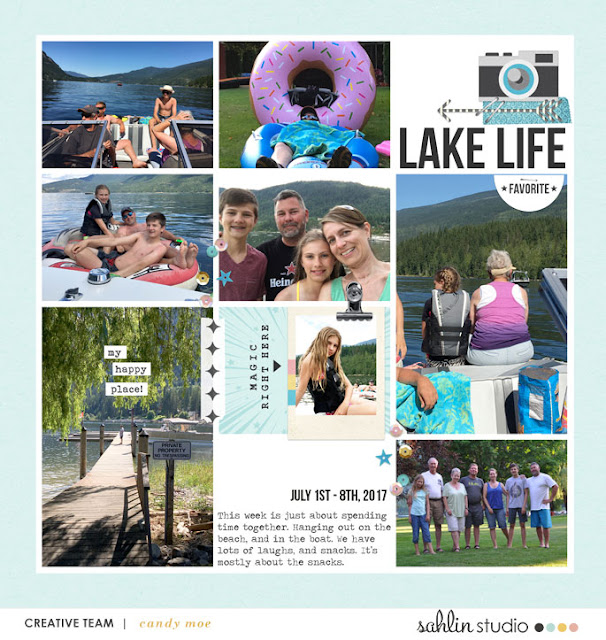 This is template No. 3

These are fast and easy. Just drag and drop the photos in. Add some embellishments and voila, you're done!

Templates make it so easy to capture memories, right after they've happened.

This months template, is such a cool design.

I have come to love clean lines and a minimalistic approach. I laugh at how my likes have changed over the years. This template can be found by clicking here, through the month of July only, get it while you can.

I love the short bullet-like descriptions. This was the perfect layout to document a weekend camping trip we'd taken to Two Jack Lake in Banff National Park.

This trip just ended up being the 3 of us. Barry, Mason and myself. Madelyn decided at the last minute to attend the last Girl Guide camp of the season. It was nice to spend quality time alone with Mace. We obviously don't get the chance to spend one-on-one time with our kids very often.

We booked this campsite back in January. When I booked, this was the only weekend available, with two nights in a row. I'm not even kidding. Booking a campsite for June, in January. Who knows what you're going to get weather wise.

As it turned out, we couldn't have been more lucky with the weather. Someone was obviously looking down on us kindly.

I'd heard many things about Two Jack Lake. Seen so many pictures posted on different forms of social media. The location and lake itself, is absolutely stunning. How can it not be really, with the mountains in the background of every picture.

The campground however... Well, it was like camping in a parking lot. Been there, done that.  We don't need to camp there again. I'm glad we went, but once is enough. 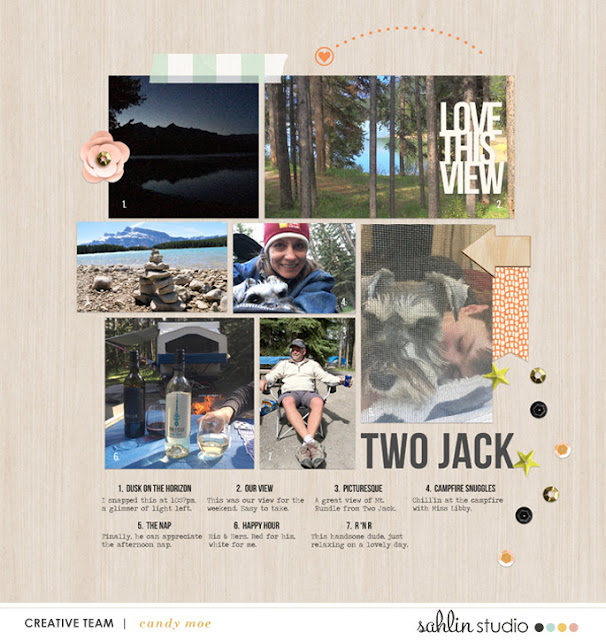 Here is a look at week 17 of my project life album. 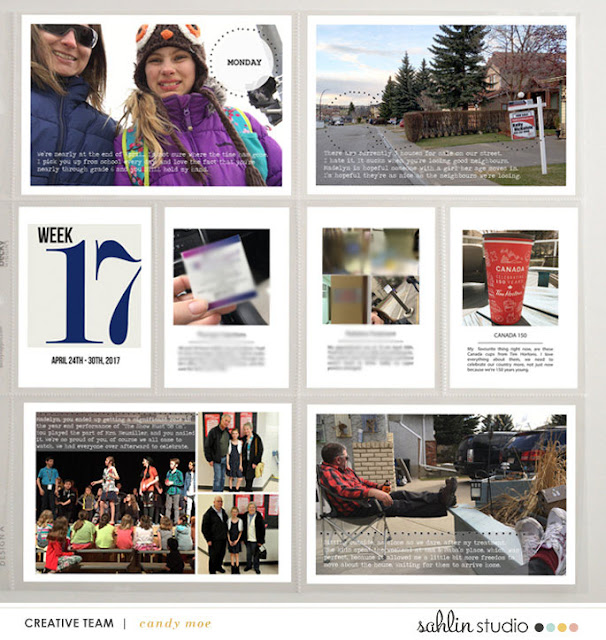 This week happened to be Ali Edwards A week in the Life. Week in the life, is a project I've followed along with for the past 9 years. Week in the life goes very in-depth into each day, and it's a project I both love and dread. I love it because going back to look takes me right back to the every day things.

Some have long since been forgotten. For example, when the kids were little, they both came and snuggled into bed with us, every morning. Every. Single. Morning. Now that they're 12 and 15, that doesn't happen. It hasn't happened for a very long time, and had I not captured it when I did, it would simply have been forgotten.

Like December Daily, it's a project that you need to tackle head on. In comparison to December Daily, at least it's over in a week, rather than going on the entire month.

I did create a 2017 WITL album, and will share it here when it's totally complete. I'm about 90% of the way there. [Shout out to summer vacation, where I'll be able to spend some late nights catching up!!]

I also like to capture the week in my PL album. Would hate for the week to stay blank.

Here is my layout for week 16: 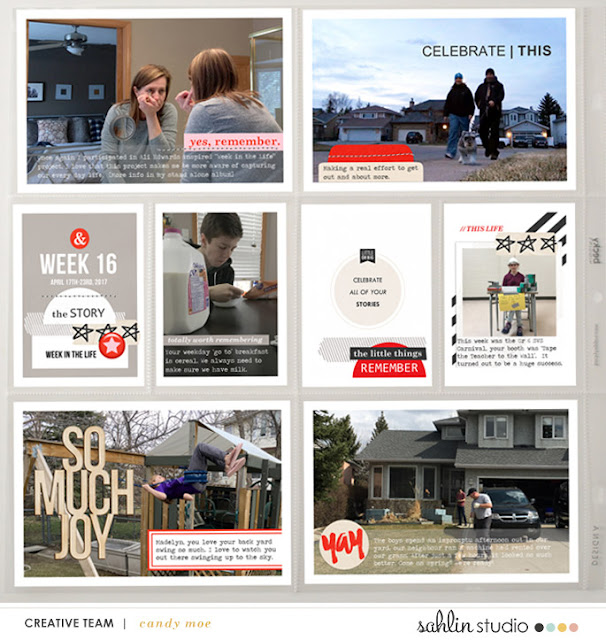 I take hundreds of photos. Hundreds. I take pictures all time. I don't print them off very often. Before the days of digital cameras, I took a roll of 24 or 36 photos, and had them printed, put them in albums. Mason has several albums of random photos for his first few years. Madelyn does not. But both have albums and books, and can go back and watch themselves grow.

I have been doing Project Life for 5 years. I have to say, I religiously print these photos all off and put them in my albums. I have 5 years of our every day stuff. I'm so thankful that I've kept up with this memory keeping or story telling. This continues to be important to me, year after year. I still love it. Not to say I am always motivated. I'm not. Sometimes a few weeks lapse here and there, but I have never stepped away for a very long time. I hope I never do.