So, before I go any further, I tracked down the album I'd begun to put together for last years week in the life...

Begun being the key word in that sentence.

Not much got done, let alone finished.

And sadly, I didn't jot down any journaling...

My idea last year was to go a 'travellers notebook' sort of format... I have photos, some taped down, some not. I might go back to it again. I probably will not.

Not sure how to tackle this year. Or if I even want to.

If I decide to do it, I will most likely wing it. Wish me luck.

Now before I get to week 14 of my project life album. I need to address the ridiculous snow storm we had over the weekend.

Weather forecasters are not always right. It seems to be the only job you can have, that you can be 100% wrong with your forecast, and you still have a job.

They had been warning us of a winter storm for nearly a week.

Saturday morning, there was actually a winter storm warning in effect for Calgary and area.  I looked outside, and frankly, couldn't see how anything was going to materialize... 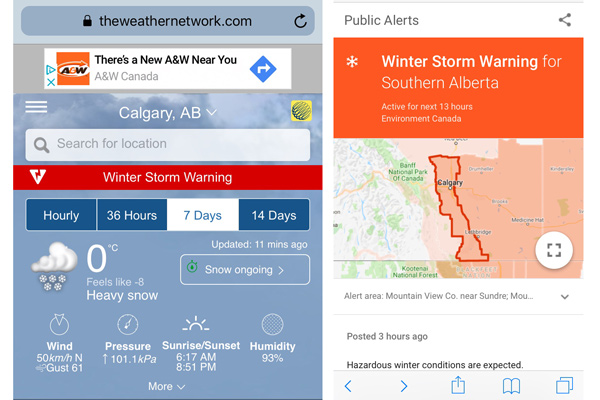 We went out in the afternoon, made a trip to the green house, because we're all getting the itch to see beautiful flowers.

Checked out a video game place, that's my crew there, in the photo below. [I chose to remain in the car. I could care less what's in a video games store, and don't want to bring anyone down with my negativity] You're welcome guys.

But you see how there is no snow? Clouds, yes, but they don't look menacing. It was even bright, because of the sun peaking through. Do you see how no one has a coat on? Yeah, that's because at 1:15 pm, there didn't look like any storm was actually going to happen. 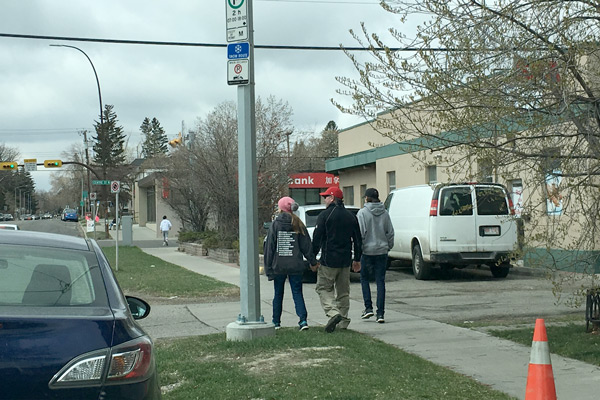 And then this happened... 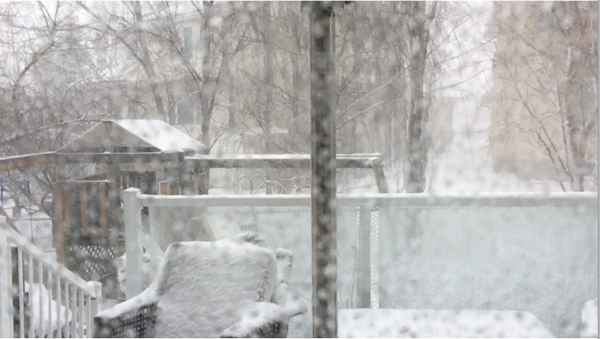 In the span of an hour and a half, we were smack dab in the middle of our winter storm. I had to cancel plans with friends. We must have sent 500 texts in a few hours. I used up my 'limit for the day'. It looked really crummy, and decided there was no reason to go out, unless absolutely necessary. 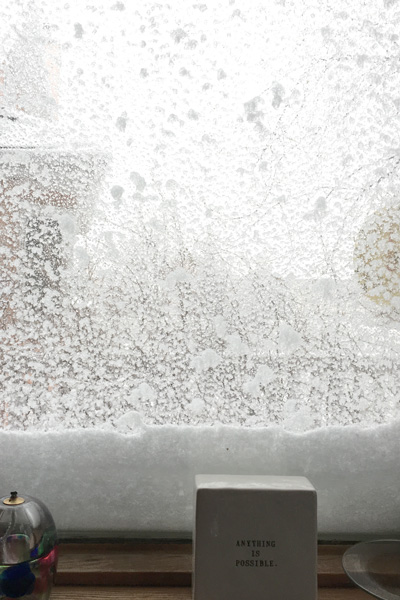 It snowed a TON. It was an all hands on deck situation the next morning. Thank goodness the sun was out. And thank goodness our wonderful neighbour let us borrow her snow blower. 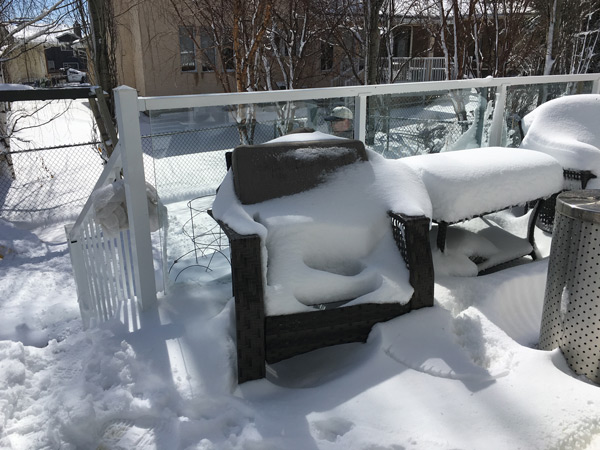 We still have a lot of snow left. It's melted quite a bit, but there's a shocking amount left. Looking on the bright side, that the grass is and trees are getting some much needed moisture. Hopeful that we've seen the end of it, although it looks like this week isn't supposed to be great weather-wise.

I guess we're heading out of April like a lion this year.

Here is  week 14 of my project life album. 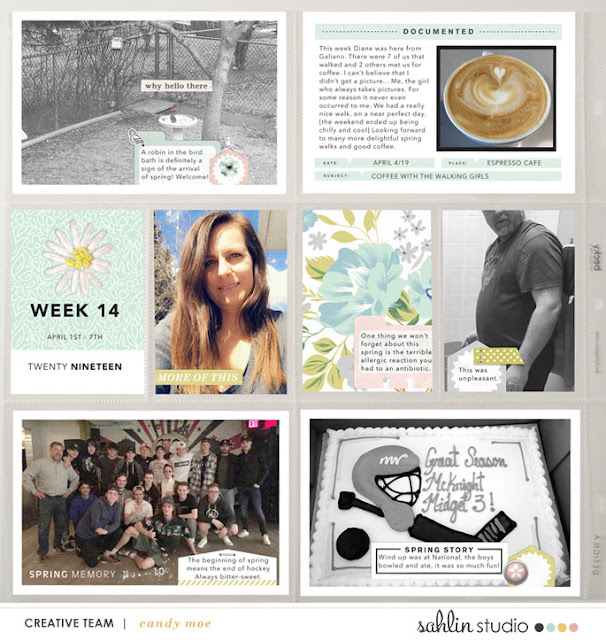 We began to notice robin's this week, that's always so exciting for us..
We had a large group for our walk, and I forgot to take a group photo...
This is the longest my hair has been since my age had the word teen at t the end of it.
Barry's allergic reaction to the medication he was on.... It was B A D...
Hockey wind up, we met at National on 10th and the boys ate and bowled. Very fun night.

I love that I have all these quirky stories to tell.

As an aside, I'm most likely going to follow along with Ali Edwards - A week in the life, this year.

Last years was a bit of a bust. I don't think I shared it here on my blog... In fact, I'm not even totally convinced I finished it... I'll have to go see if I can track it down. I had a quick look for it, and it's not with all the other 'Week in the Life' albums I've done. Good grief... Where could it be?

Come to think of it... I'm not even sure I ever shared 2018's December Daily. Did I? I'll have to check that out too.  [Update, yet, I did share that one, it can be found here if you're interested]

Any way, I think Ali is beginning her WITL on May 6th. I haven't decided how I'm going to handle that yet. But as usual, I know I'll regret it if I don't do something...

For now, here is week 13 of my project life album. 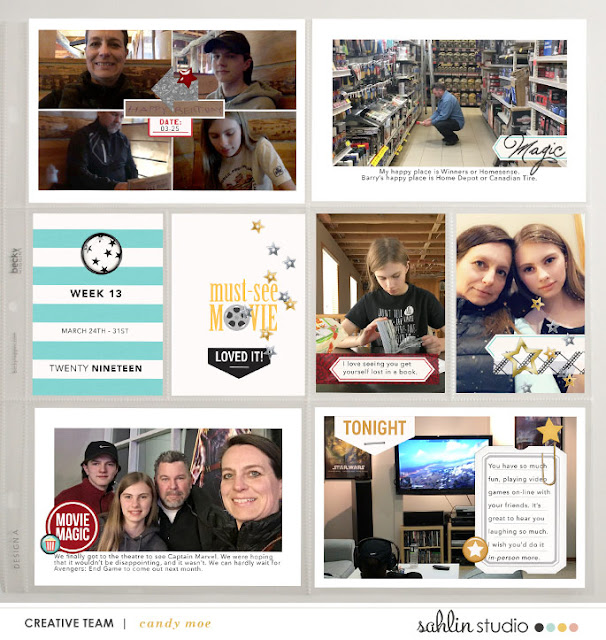 And now, I have to go track down last years Week in the Life mini album.
Posted by Candy M at 2:24 PM No comments:

It's so funny how sometimes I have an abundance of photos, and sometimes I'm really pressing to come up with enough photos.

Like I have said before. I'm okay with having some weeks here and there that are either combined, or really light on photos. For the most part, I'm just glad that I'm documenting. I'm never going to regret that.

Another thing that has come to light, is my teenagers are not always thrilled to be front and centre anymore. Sadly, I suspected this time would come. Are they still getting photographed? Indeed they are. But I'm being mindful of the photos I post. 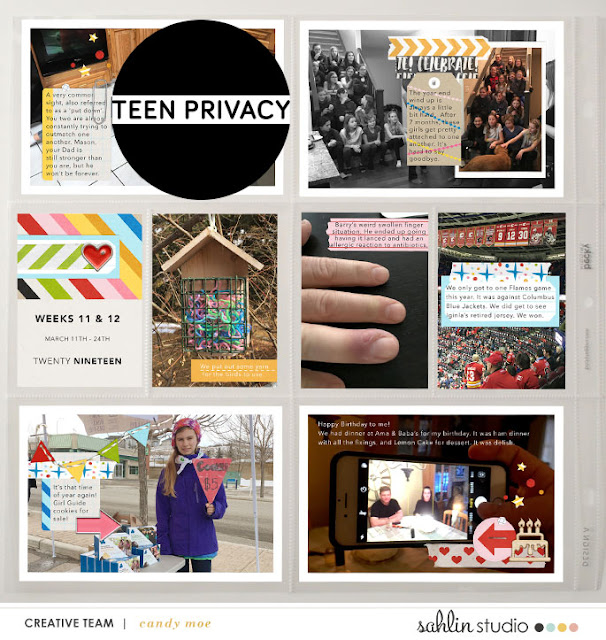 So, I kind of struggled with this months template...

Not the design, because as you know, I'm a sucker for multi-picture layouts. I struggled with the size of it, 12x12.

This is the template, which is free to download here, through the month of April: 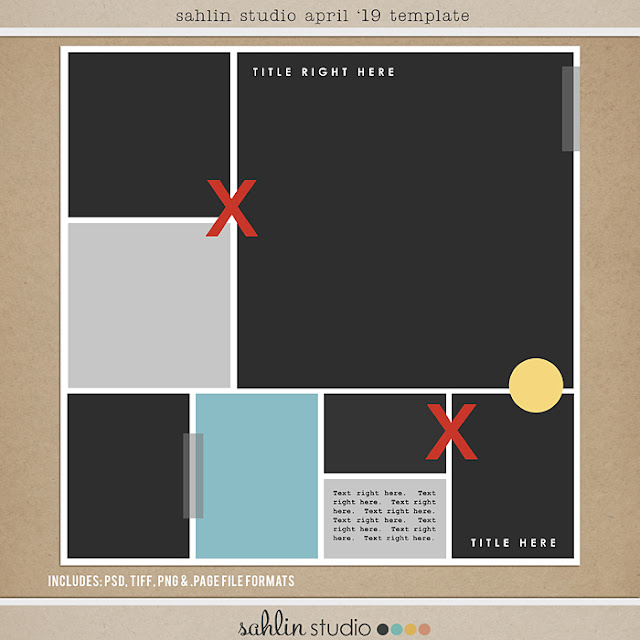 I like love the style. The problem I have is, for this Canadian girl, it costs so dang much to print bigger sizes of photos. A ridiculous amount. Costco charges $6.99 for a 12x12 size picture.
For one single photo. That's just too much for me. Because I never have just one picture to print off.

I initially created this layout. Once some time passed, I knew I wasn't super happy with how it turned out. I also knew I wouldn't have it printed at this size. 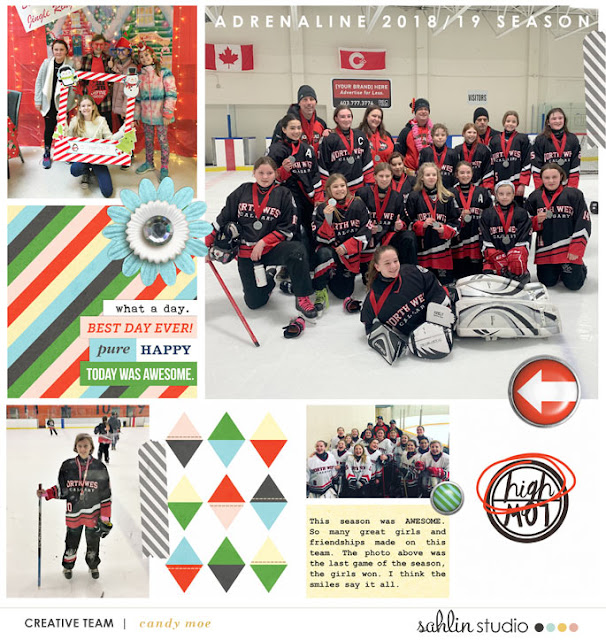 So I went back and tinkered with it a little. And then a little bit more.

I ended up shrinking it down to 8x10 size. At 8x10 it's not nearly as costly to print off, and I can add into a page protector directly into my album. It's so easy to manipulate digital files. I love the flexibility that digital scrapbooking has.

I have to say, I'm really happy with how this final version turned out. 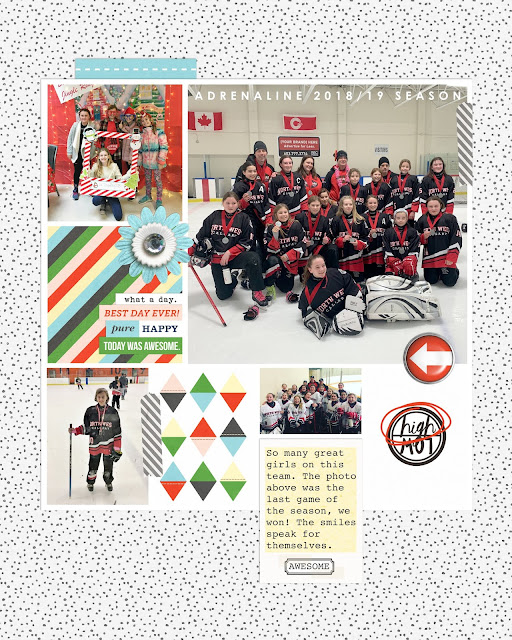 It's hard to believe that only a month and a bit ago,  there was still this much snow out. Believe it or not, it melted in what felt like record time. A few days in the high teens is all you need to watch the snow banks rapidly diminish. 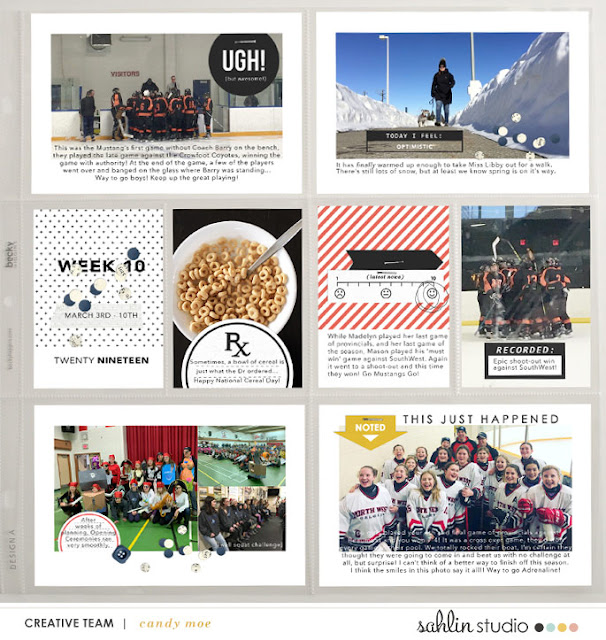 Mustang's were in the midst of city play downs. It's a 2 game knock out. We'd lost a game, so every win from here on out gets us closer to the finals. This week, they won 2 games.
Walking Miss Libby. Look how high the snow is!
National Cereal day, just plain Cheerios is my cereal of choice.
Opening ceremonies for Provincial play downs for our U14 girls. We hosted, and it was  lot of work, but it ran along very smoothly.
Our last game of the season, and they won. These girls couldn't have gone out any better.

[This kit was created with the idea of perhaps some kind of medical upset, I love to show that you can use these digital products, by thinking outside the box]