My PC died. Literally died. I had just finished a few layouts, and suddenly the screen on the computer went wonky, and then the computer shut itself off...

I was sick to my stomach about it for 3 days. I still am, but those first three days, those were the worst. You may recall me talking about a new Mac computer we bought, back in January. We had supposedly 'migrated' all our stuff from the PC to the Mac, but as you might expect, there were problems. Do things ever run smoothly in the technical world?

We saved all our data onto an external hard drive, so I have everything up until January. Supposedly.
[By the way, I'm using finger quotes when I say "supposedly"]

I'm not very computer literate. I get nervous about anything that doesn't go exactly the way it's supposed to. I suppose that goes back to all the years of calling the IT desk for help at work. I never dreamed of solving things myself. Always a nice young man came up and solved things for me...  So, I have the external hard drive, and 'supposedly' all the information on there. [Seriously, fingers crossed]

After a while, we had two computers to choose from. And I always chose the PC of course, it's what I know/knew. I still used PSE, which worked perfectly fine. Why worry about downloading that onto a new computer and learning the new ins and outs of PSE on a Mac? Plus, none of my photos came over during the migration, so even if I had the new program, how did I get to my pictures? It's becoming clear to me by the way, that at least one of my kids should get into 'computer stuff', so they can help their dear old Mum...

So, nothing changed, in how I used our PC computer. I continued on, quite merrily, doing what I've always done.

Sometime, the CD burner on the PC quit working. I'm going to say February-ish. Don't know why, but accessing the CD Burner was no longer an option. Did I just date myself there? By using the words CD Burner in a sentence? Again, that's what I had, and it's whats I knew/know. Please don't judge me.

However, I have all my photos burned onto CD's. Except the photos since Jan-Aug, because, I couldn't...

In the grand scheme of things... I have 10 years worth of photos burned onto CD's, so to say I don't have the last 7 months of photos backed up... Well, it sucks, but it's not the end of the world. Plus, I've kept up to date with printing off my project life photos, so I think I have up to week 24 printed off... But that's where it ends. Week 24 was back to the first week of June... So I have the paper copy of that, but not the digital copies...

The worst part, is I haven't printed off a digital copy of my regular scrapbook layouts since last summer. From 8x8 up to 12x12. It's too expensive in Canada to print them off [a 12x12 size runs $5.99 per page. Per. Page] So, I tend to save them up until I have a significant amount, and send them to be printed in the states. But there again, the Canadian dollar is just terrible right now. The last time I sent photos to be printed, I sent them to Persnickety, I was really displeased with what came back to me...  And I had to pay in US $$ to be disappointed. So I've been a bit gun shy about sending my stuff there, hence the reason I have over a years worth of layouts, that didn't get printed off... Eeks.

So, I'm hoping I can get those layouts back.

Speaking of layouts, I also do a school album for the the kids. I had just finished the pages for Mad's Gr 5 year and Mace's Gr 8 year also. But didn't send them to Costco... Bummer. If I'd at least done that, I could get to those photos... So those are stuck on the computer also.

Any way... I'm not the only person this has happened to. It just totally sucks.

My last complaint is, this isn't high on Barry's radar... To have someone come in and pay them, to restore stuff on our PC. If that's even possible. He has a work computer, so doesn't think twice about the inconvenience I'm experiencing. I have commitments too, so I'm desperate to the this sorted out.

Just like that, the sick to my stomach feeling is back... It didn't go away after all.

I'm hoping that this issue gets solved.

Until then, it's going to be quiet on this front. Can't even post a photo here...

We're officially 6 weeks through summer. Kids are off for another 3 weeks. So many of the blogs and people I follow on IG are heading or have headed back to school. That seems so sad...

In June, when all those same bloggers and IG-ers are sharing teacher appreciation gifts, and showing themselves with last day of school photos, at the beach, enjoying their summer holidays, I feel envious. But at exactly this time of year, I feel glad. I am thankful we don't go back to school until September. September 6th to be exact. Whaaaa? How awesome is that?

Now having said that, this is also the time of year that I begin to bleve a lot quicker.  [FYI - the definition of bleve is this: boiling liquid expanding vapor explosion] By now, my kids have had about enough time together. All one needs to do is look at the other one, the 'wrong way', and a battle ensues. Or, they get silly together, and it's always fun, ALWAYS, until someone gets hurt. And in my experience, someone ALWAYS gets hurt...

This summer has been kind of different from summers past. First of all, I'm working... That's right, not a lot, but some. And kids are left home by themselves more. The person who it seems to be affecting the most, is Madelyn. I thought she'd be delighted to have a few hours to herself, that she can watch 'her' shows, play 'her' video games, since her big brother sleeps until noon when allowed to. But it turns out, she's having a harder time with it than I thought. I guess she doesn't like to be alone.

We have gone on a few camping trips, and still have another one in the works. But we didn't do our annual vacation this year. I guess it just wasn't in the cards. Couldn't get dates that worked for us, and then there's that job again... [Note to self, don't start a new job in June. Wait until September.]

And, the weather has been absolute crap. I kid you not. The rain... We're all so tired of the rain. It started to rain the day after the Calgary Stampede started, July 9th, and has rained ever since. We have had a handful of rain free days. I wish I were exaggerating. July was the wettest month on record in 90 years. We broke records. For rainfall... Not fun. The Calgary Stampede was the wettest on record. Events needed to be cancelled because of the dangerous conditions, water and electricity do not play nicely together.

Many of us looked hopefully towards August... Having high hopes for a month of awesome weather. Sadly, that too has been thwarted. It has rained and rained and rained. One severe thunderstorm after another. For this girl, who is ridiculously scared of lightning, I'm more laid back about it than ever before, which is likely because we've had electrical storms almost daily.  I'm getting numb to them. Last weekend we met friends at a nearby pub, and guess what popped up on nearly every TV in the place.... 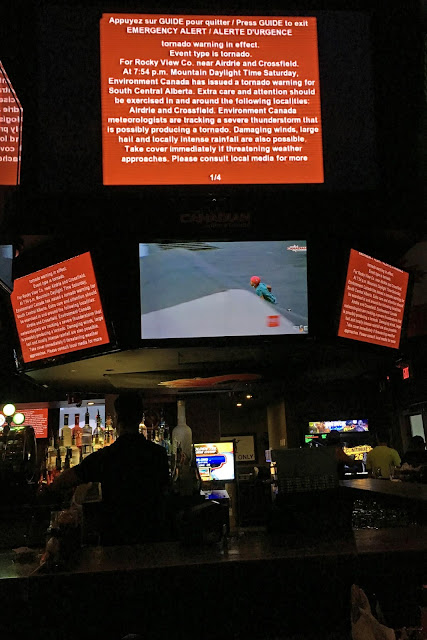 A tornado warning... For Airdrie, which is 10-15 minutes from our house. My kids were home alone, so I was feeling extremely vulnerable and uncomfortable. The only thing that scares me more than lightning, is a tornado. Hell yeah, I have a emergency kit in place in our basement...

It was weird that night, outside... Weird colour. Weird stillness. Weird that someone even commented that it seemed like we could be in the 'eye of the storm', like the Day After Tomorrow. [Which is an epic movie, if you haven't watched it, you should] The clouds were so low, they seemed to hover just off the ground. We had  a great view from the pub window. It was eerie. Super eerie... I have to say that I was grateful to get home that night, and when we did, we were of course treated with an epic light show in the sky.

A few days ago, I heard that we'd already surpassed the amount of rainfall we usually get for August in general. However, I can't find anything to back that up.  But it certainly seems like it's true. Flooding of some sort, have been at the top of so many newscasts this summer, we're now numb to that too.

Any way... Enough about that crummy weather, I guess we can't have it all. Winter and spring were awesome. We're obviously making up for that now.

Onto week 22 of my project life book: 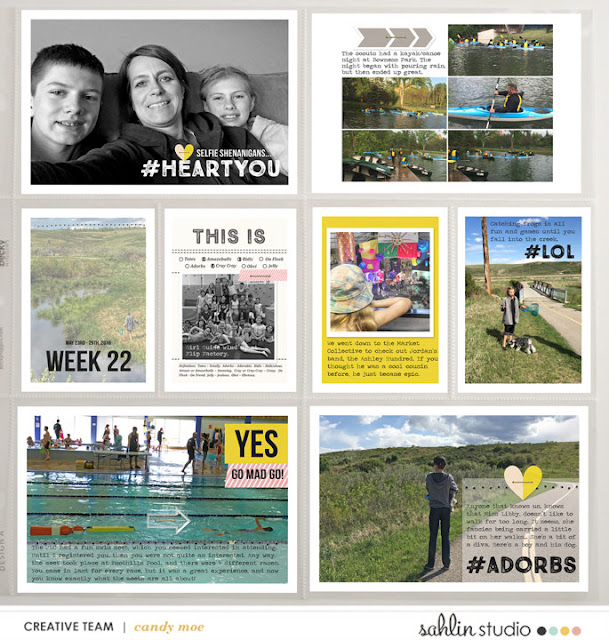 This week, scouts went to Bowness Park and did canoeing and kayaking. We made several trips to the creek near our house. Libby loves it, but always gets to a certain point and wants up. Madelyn finally fell into the creek, in her quest to find frogs. We were actually in search of goats, a Calgary pilot project, but never found them. Mad had a girl guide wrap up, the season if officially over. We went and watched our nephew perform as part of the Ashley Hundred at the Market Collective. Madelyn was in her first ever fun swim meet.