Our October and November, have been a far cry from what they were last year. [Which was warm. Unseasonably warm] We had a most delicious fall actually, until we hit October. Then it got cold. We've even had a fair bit of the white stuff. [ick, gross] Not much we can do about the weather though. I mean, we can gripe and complain until we're blue in the face, but the truth is. It's cold. And it's snowy. Welcome to winter in Canada. Dress warm and carry on...

One of the things our snowy and cold days has done [aside from getting myself re-acquainted with a snow shovel] is to put me more into the Christmas Spirit. There's a most magical quality that comes to life when you add snow and Christmas lights together. Last year, we had so little snow, and somehow, that just put things a little off kilter for me. Though we've already had 30 cm of snow [which has melted in Chinook-style fashion two times already whoop=whoop] It has made the arrival of the holidays that much sweeter. In fact, Barry put our Christmas light up last weekend, just after our snow had all melted away. Just in time for the next snowfall that covered us in yet another dusting of white.

We've also had our share of hoar frost this year, which is unusual for us. It's when we get a lot of fog and moisture, that is snow, but isn't... We have had a lot more grey days than usual, which does get a bit tiring day after day. You see, it can be insanely cold here, but bright and sunny. We're not used to dull and grey, and it does take it's toll. 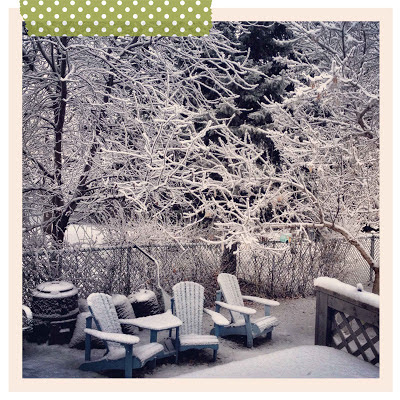 I love how everything looks with Christmas lights. It makes my heart smile. 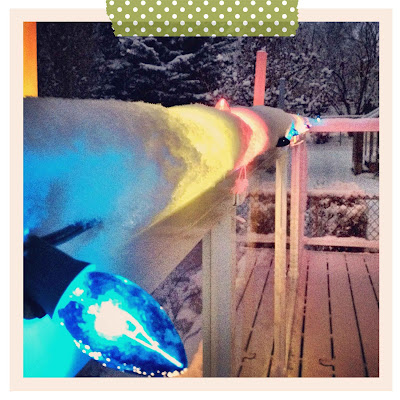 We have always decorated our home at the end of November. We have made a special family night of appetizers and house decorating. We pull out the Christmas music and movies, and try to enjoy the season as much as possible. It also seems to get so busy in December, with different Christmas parties [both for us and the kids]. There is the school Christmas Concert and the Christmas wind ups for both Cubs and Brownies. We can't forget hockey this year, that Mason is playing and keeps us busy on average about 2-3 days per week, though we've got 6 ice times [including a game] in the next 8 days... We have to fit in special family time, when we can.

This past weekend we did just that, and decorated the house. 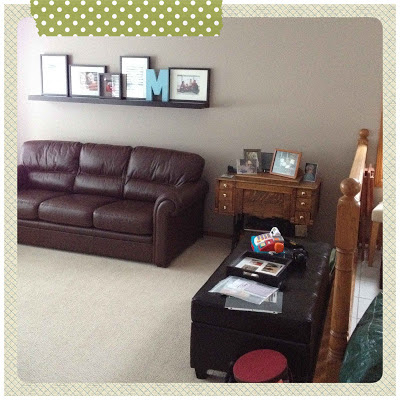 This is how our little corner looked before the tree. 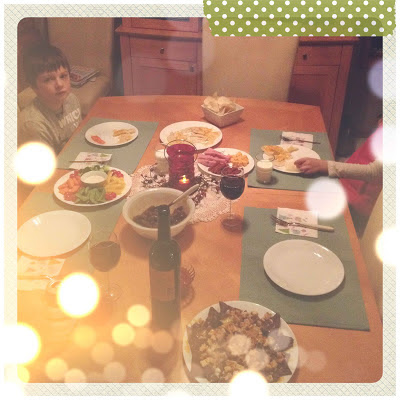 We had a yummy snack supper.. Nachos, ginger beef, meat, cheese & crackers, chips, veggies & dip... You kids, have always loved the idea of 'the snack supper'. And really, it's snacks... What's not to like? 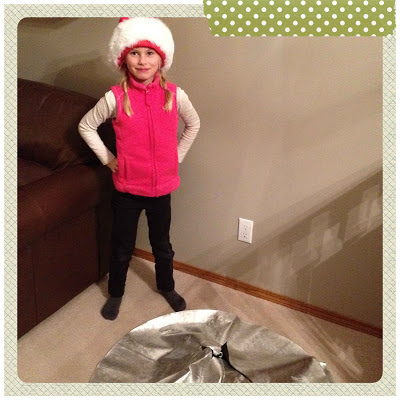 Our biggest little helper. The other one helps out intermittently, at best. He came home from school with the newly released Rick Riordan book... He couldn't stay away from it. 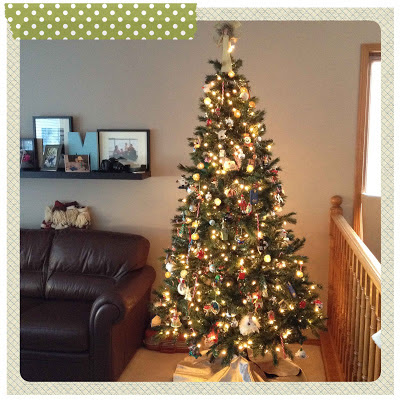 The finished product. This is the 14th Christmas tree we've put up together... Wow. Still loving the white lights after 14 years. [If you could really look at this tree, it's very decorated from about half way up, down. Every year the kids can reach a bit higher, so every year it gets a little more decorated. I decorate the top portion, but I've never fixed up what they've done. I love how it looks.

Now I've got to get my head wrapped around all the other things that come with December. I still have to finish the advent stuff for the kids... I have done something different for them every year. This year, I have yet another advent idea planned. I've got to get working on it, I have to have that ready to go by Saturday!! Yikes! And family pictures for Christmas cards... Eeks! Still have to do that! Need to get my lists started!

There has been so much chatter on-line about this years upcoming project life... I'm totally not sure how to handle the next year. Do I do this again??? Don't I? If I do, will it be as cumbersome as it was this year? [Not that I haven't loved doing it, I HAVE!!] Or will I have it streamlined a bit, and perhaps the process will be easier? [Nah... doubt it]  When I started doing PL in January, my goal was do create 4x6 scrapbook layouts, you know, out of paper. I've gone completely to digital scrapbooking, which I LOVE, but I miss cutting and pasting too. The only problem is, I have done the majority all of my album digitally this year. I see other albums, and I love the mementos that get added in. I love the snippets of here and there, but I just can't seem to be organized enough to collect things like that. I look through my album, and I'm just so grateful that I've captured what I have. And I guess that means, I don't really need physical 'stuff'.  Looking back through my album takes me back immediately to something I'd have otherwise forgotten about...

I'm so tempted to order the actual book, from Becky Higgens, but then hesitate... If I have the journal cards and page protectors, will that make me do it on paper? If I'm honest with myself, I just don't think so... So although I salivate when looking at online albums, such as Ali Edwards, Gluestick Girl or Marcy Penner... I'm totally content and happy, that mine looks just like it does. I guess that's 'my style'.

I also realized last week, that with the digital age, I don't print off pictures the way I used to. That's probably because I went from having 24 pictures [1 roll of film] per month, to between 300 - 500 pictures a month on my digital camera. It's too hard to choose. I had a dozen photo albums, up until Madelyn was born, and I think there's 1 album, maybe 1 1/2 since she arrived... How sad. I have thousands of pictures, but most of them reside in various places [hard drive, external hard drive, cds, memory sticks] So to have an album, of up-to-date pictures, with snippets of every day, is so awesome. The kids love looking through them. Makes me happy to see them get such joy out looking and remembering... So I have a big decision to make, about 2013. Because I'm an all-in kinda girl. I don't do great at 'sort of' doing something. And honestly, I just don't see how you can pare it down...

Any suggestions would be welcome, as to how to tone it down a little bit.

Here are the latest weeks I have for Project Life: 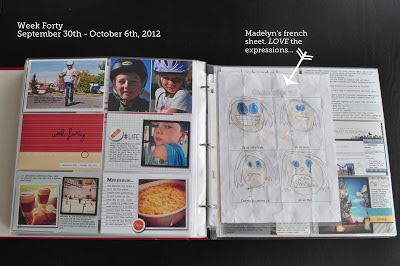 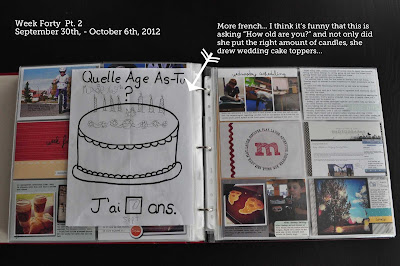 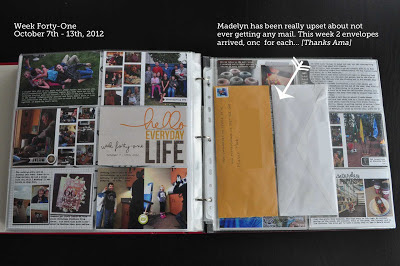 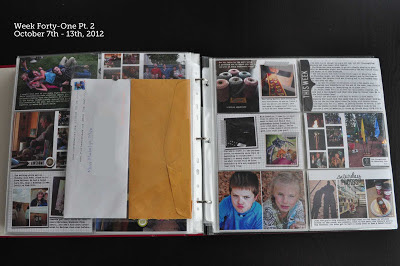 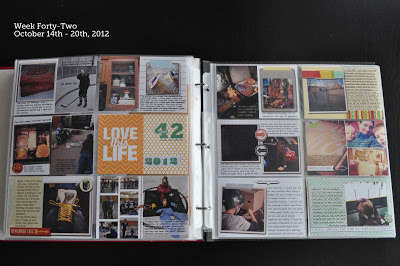 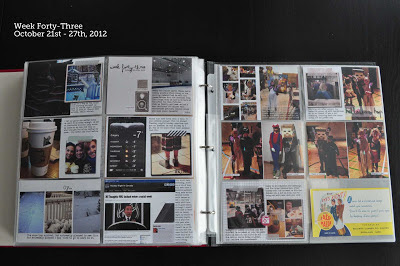 And if you can believe how crazy I am... I'm gearing up to do a December Daily album. I know... Certified-Nut-Case. Having these little albums come out of boxes near Christmas, is just too great to pass up. I adore looking back at them. This will be my 4th year doing a December Daily album and I just can't imagine not doing one...

I suppose, that's exactly how I feel about Project Life! Eeks!

I'm not going to try and sugar coat this... Halloween 2012 was the pits, weather-wise. I just can't help but get feeling a teensy bit jealous, when all the bloggers and instagramers I follow are enjoying such a lovely fall. [Well... Maybe they're not. It just seems like they are] I wouldn't wish Tsunami warnings on anyone, and I don't ever, want to have to hunker down for a hurricane. I guess a little bit of blowing snow isn't the end of the world, but from what I saw, no one had pictures on instagram of their kids dressed for the arctic. Oh wait... I did.

This year was also was also a year of change. Mason wanted to go out trick or treating with his friends. I get it. I mean, I was 10 once too. I got to go out with friends. When I was little, there were so many kids, you had to be careful not to be pushed of the front porch. You had to line up, to get a treat. So I know how fun going with friends can be. Mason even said "Mummy, I'm running out of years to go out for Halloween, and I'd really like to go out with my friends." How could I argue?
I launched into the 'you can go with your friends, but you have to take your sister with you' spiel. He agreed [that's the kind of sweet boy he is] and I promised him that Madelyn and Daddy would follow behind him and his friends, giving them some distance.

When I told Madelyn what the plan was, her response was "I'm not going trick or treating with a bunch of stink'in boys." [that's the kind of sassy girl she is] We needed to make alternate arrangements. It ended up being Uncle Don to the rescue. Miss Madelyn went out with Uncle Don, and Barry took Mason to meet up with his friends.

Once the kids were out of the house, all was good. But when Madelyn came downstairs, with her tights, black t-shirt, dress and butterfly wings, and proceeded to head out the front door with boots on, I had to put an immediate stop to that. I knew, the kids were going to have to wear winter jackets, toques and mittens. But to them, this came as a huge shock... Both absolutely refused to wear snow pants, which I finally relented about. But there was a storm brew'in trying to get them properly dressed out the door. Mason was somewhat motivated, by the fact that his friends were leaving a certain place, at a certain time, and if he didn't get there, he missed out. So he sulked, but put on his jacket. [He also agreed to put on a hat, after spending a few moments outside. He realized that perhaps his box head wasn't going to be as warm as he'd hoped.

The girl was another situation. She was furious with me. She was in tears, because her costume was wrecked with having to add a coat, hat and mitts... I finally got her out the door by telling her that if she didn't put on her outer wear, she might as well head up to her bedroom, change into her jammies, and she could help me hand out candy. Those were the magic words, because she her stuff on, and headed out.

Madelyn was so mad, she wouldn't even look at me to get her picture taken.


And then the house was quiet... I poured a glass of wine, and settled down to hand out candy. 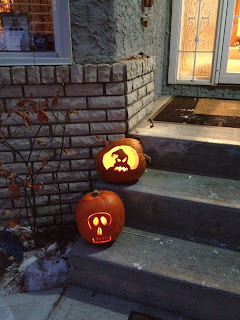 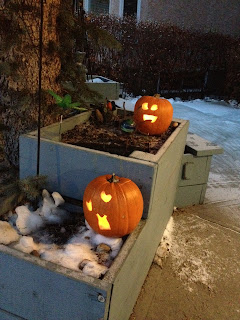 This is the first time in a long time I haven't 'spookified' our front yard. In fact, one of my favourite things is all the kids complimenting me on how awesome it looks. But this year, with the snow, my heart wasn't quite in it. 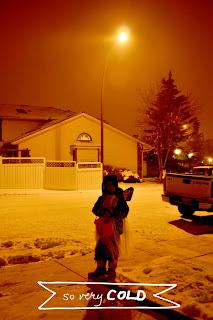 She came home in much better spirits. She even agreed to a few pictures. I had to take this one, showing the fog. It was such an eerie night, and the next morning the hoar frost was amazing. 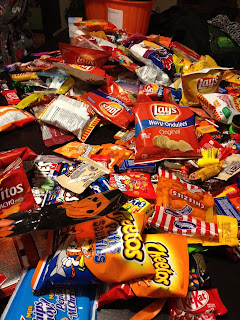 And then, the most favourite part... Dumping out bins, seeing who got what. Dividing up candy, and tasting a few treats before bed. They also both had a mug of hot chocolate when they got in. They both lasted a lot longer than I thought they would have. We only had 25 kids come to the door... Oy... That's a lot of leftovers. I planned on having about 50 kids.

And now... December Daily! The snow totally puts me in the Christmas mode. So excited this year! Can hardly wait. Going to start putting my book together this week.