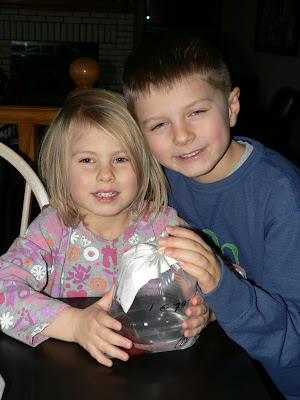 Our newest member is a red fan-tailed Betta...Or wait, maybe it was a veil-tailed Betta... Hmmmm, I actually don't recall what kind of a tail he has... But I do know he uses it to swim. 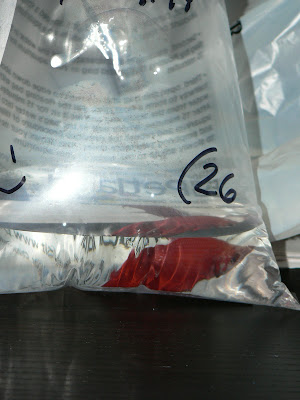 Gilbert came to live with us Monday after school. We all piled into the car and headed to the Pet store. Once we got there, this little guy is the one who won over the hearts of the kids. Well, Madelyn's heart actually. She is the one who picked him out. Suddenly Mason became indifferent, until the name game started. On the way home, they wanted to name him George, or Bob. Madelyn wanted to name him Goldie... (when he's clearly red...) So I put a few suggestions in the pot and Mason settled on Gilbert. (You know Mum, he's got gills because he's a fish, and Bert from Sesame Street... Gilbert) Ok little dude, Gilbert it is.

These two were so excited, when we finally got down to the DAY that we were going fish shopping Mason said to me "Really Mum? TODAY is the day we're getting our fish?" They are both so excited. One feeds him in the morning, one feeds him after school. There has been a lot of excitement surrounding this purchase. [And as the water in the tank begins to get slightly cloudy on day 2, I think....Awwww crap] Because I'm pretty sure I'll be the one doing all the fish maintenance.