We started week 29 off by camping in Bow Valley Provincial Park. When we started camping last year, we went Sunday to Wednesday. It worked out really well, because the weekends are generally busier and more in demand. We're lucky Barry is flexible, and he can also do a little bit of 'remote working' as long as he has cellular coverage.

When we arrived Sunday, it was super smokey. Ash was actually raining down on us, our vehicle, trailer and picnic table were filthy. We had a spot right down by the Bow River, which made Madelyn's trip even more awesome. Lots of time spent 'frogging'.

This week had one of my most memorable experiences of the summer.

On the 22nd of July we went to a presentation of Milky Way Nights put on by the Rothney Astrophysical Observatory [U of C] The observatory was open to the public for night sky viewing. [There were many telescopes set up by numerous excited astronomers, volunteering their time] I had found out this was happening by reading about it in Calgary's Avenue magazine. I was absolutely keen to do this. Thankfully, so were Barry and the kids. Gates opened at 10 pm. We arrived at 9:40 pm, and were at least half way down the dirt road, waiting in line. At 10 pm, the gates opened, and we made our way up to the parking lot.

The night couldn't have been more perfect. It was absolutely still. It was warm. And most importantly, totally bug-less. We observed Jupiter and Saturn through high powered telescopes. [I actually saw the rings of Saturn!] I was totally nerding out, and lined up to have another peak at saturn on numerous occasions. We waited in a very long line, to have the opportunity to look into the night sky through the large telescope. The hope was we would get to look at a nebula, but they were having a hard time locating one. Instead, we got to see Arcturus. It's an orange giant star which is about 37 light years from earth. It's part of the Bootes constellation. It's visible to the naked eye in both the norther and southern hemisphere. It's the 4th brightest star in our sky. It looked like a huge shiny diamond in the sky. [Told you I totally nerd out about this stuff...] It was very cool.

After that, we went back to a grassy area, and found a place to sit down. [My only regret was not having a blanket to sit on the ground on] By this time, there were many, many other people. It was dark, with no moon [not very easy to see ones way around] We watched as the sun set deeper on the horizon, and the milky way came into view. It. Was. Awesome.  Around 11:00, they began a talk on the night sky. The man doing the talking pointed out various constellations with a laser pointer [making sure there were no planes in his path] Told us stories of different constellations. We saw the ISS [International Space Station] fly overhead. I saw the little dipper, turns out what I've been calling the little dipper my entire life is actually not the little dipper at all.

The milky way though... Wow. It was amazing. Even the guy giving the talk couldn't believe what a great view we were getting of it.

We finally left at about 11:45, Barry felt the talk was 'wrapping up', and there was still a steady stream of people flowing in. As we left and made our way back to the highway, people were literally streaming up to the observatory. There were cars parked all along both side of the highway. It was totally dangerous.

We were so lucky to get there when we did. We got a spot to park. We got the chance to look through telescopes. We got to listen to a fantastic talk. I got to see the rings of Saturn! With my own eyes!

My hope is that all the people that were flowing in, were donating money to the observatory, as 100% of the proceeds go to educational programs. At the time, the suggested donation was $20 a carload. Since then, as of September 15th, 2017 the donation has gone up to $30 per carload. For our little family, it was absolutely money well spent.

I was giddy the entire ride home. It was absolutely a highlight of the summer for me. [I included a tiny photo of what Saturn looked like for me on my journal card]

Here is week 29 [though I've touched on everything but the movie Spider-Man: Homecoming]: 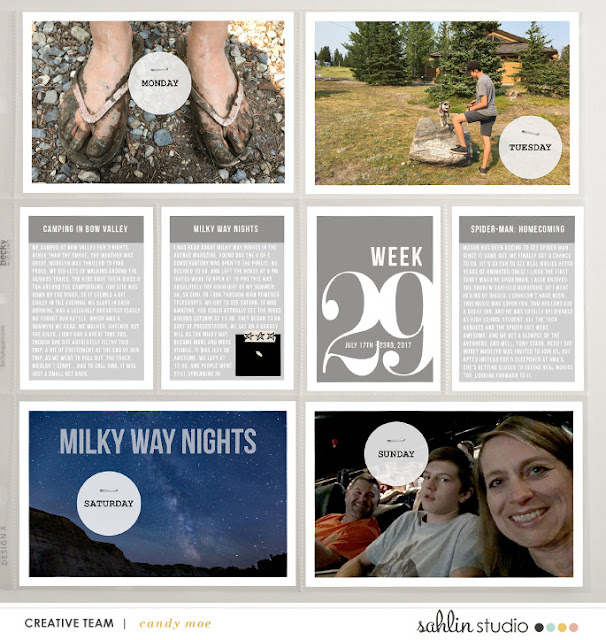